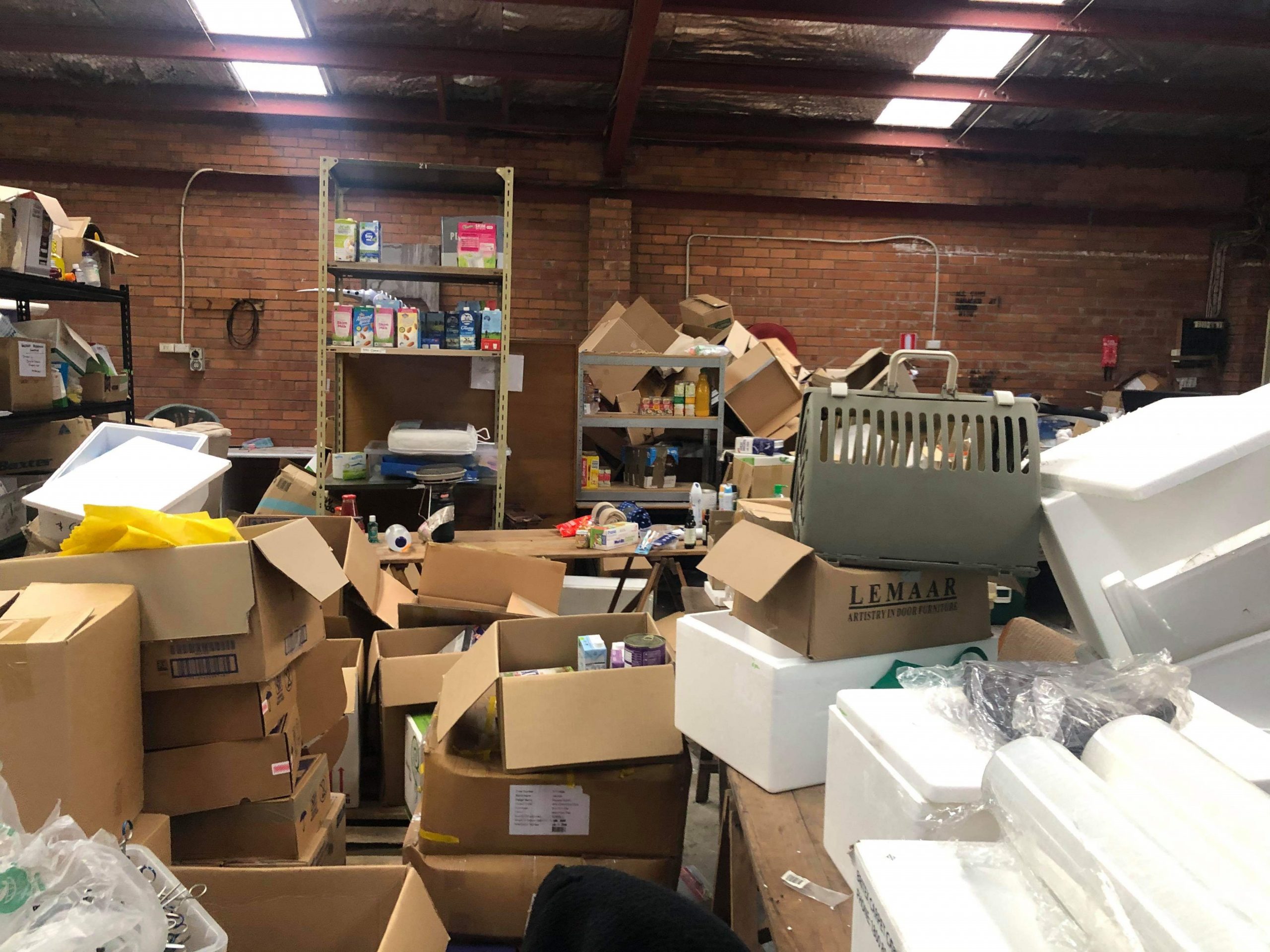 AN animal rescue organisation called in to help clear out an abandoned warehouse full of donations discovered much more than it expected when volunteers turned up to the Churchill property.

Animal Rescue Cooperative was part of a salvage operation organised when the building’s tenants left behind a large stash of donated supplies and a few animals in poor condition and without adequate food or water.

Cooperative volunteer and Sale nurse Joey Smith, who helped head the salvage mission, said the warehouse owner had repossessed the property, only to find it was piled with donations collected by community organisations for people affected during the summer bushfires.

While the animals were collected by a local ranger to be vet checked and cared for, it took 40 hours to move 40 pallets of goods from the warehouse.

“Tins of food, adult and babies’ clothing, nappies, baby food, animal food, medical supplies, toiletries, tools, care packs for firefighters – anything you could think of was there – abandoned and in absolute disarray,” Ms Smith said.

Ms Smith said the warehouse owner had asked Animal Rescue Cooperative for help to move the donations and redirect them to where they were needed.

She said it was not the first time volunteers had cleared donations that for some reason hadn’t been distributed, though this was one of the largest.

“Early in the fires a lot of craft, medical and forwarding sheds popped up and quickly got filled with donations for many organisations,” she said.

“But it’s not easy if you don’t have the contacts, the transporters or the funds.

“If you’ve burned bridges it piles up fast, and a week can mean the difference between helping and overload.

“Everything from materials, towels to sanitary pads, food to milk.

“They all need to go somewhere.

“There is often a lot of excitement and attention doing rescue, but once the selfies die down, people soon realise that this is a marathon, not a sprint, and you need to get up and do it every day.”

Animal Rescue Cooperative volunteer Louise Black said the discovery highlighted the need for people collecting donations to consider who they would distribute them to, how they would move them, and whether they could afford to do it.

“Truck hire and costs are about the $4000 mark ,and the volunteer team we pulled together was massive,” she said.

“Nearly 20 volunteers worked all day to clear this mess and salvage the items needed.

“But it was worth it to get this where it is needed.”

Working as a team, with support from Bayside Community Emergency Relief, the volunteers identified charities in need, and are helping to coordinate the redistribution.

“It’s a mammoth task, but several charities are getting aid they desperately need, so donations will not have been wasted and many more people and animals will be helped,” Ms Black said.

“This was an enormous job, but in less than 40 hours from start of the clean-up there is now food and product in the mouths and homes of people that need it.”

Ms Black said the project was a team effort involving people from the Churchill and Gippsland communities, and a local haulage company which carried out the transport over two days.

The cooperative is a national volunteer group which rescues and supports animal rescuers nationwide.

This equated to 94 per cent of all its donations. The group is comprised of specialist animal rescuers, professionals, volunteers and wildlife workers, all with a common goal to help animals.

It is also the largest craft and possum box producer in the country, with more than a thousand volunteers making supplies for rescuers.