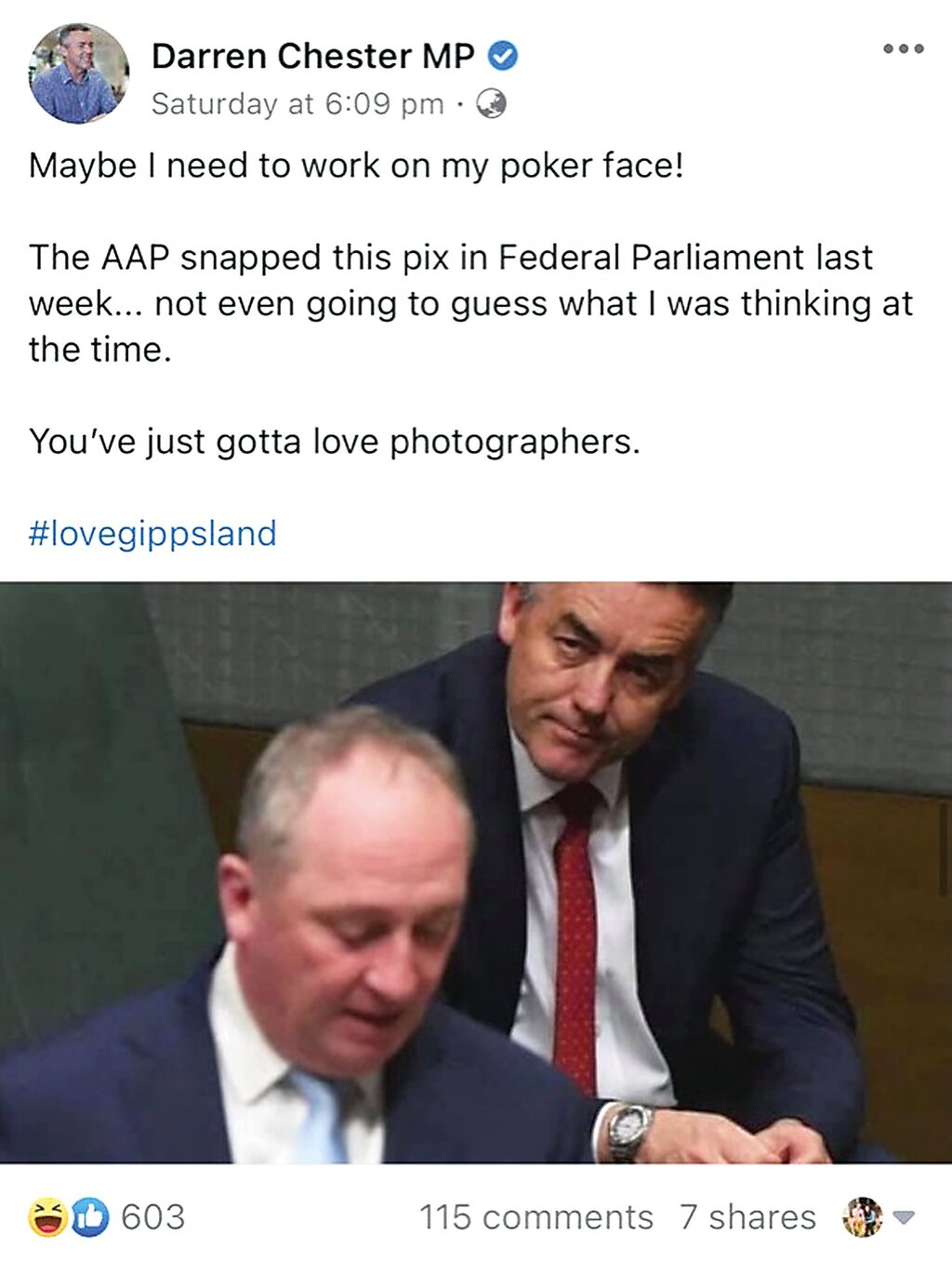 GIPPSLAND MHR Darren Chester publicly cautioned his party against climate denial earlier this month, calling for “more boots and less suits” when it comes to climate action.
In an opinion piece submitted to the Herald Sun, Gippsland MHR Darren Chester warned the Nationals could “wave goodbye to the generation of voters who will shape the future of Australia” if the party continued its fixation on coal.
“Quite simply, the Nationals party room can’t be looking back wistfully at the 1950s as the good old days, when our communities are looking forward with optimism and purpose to a better future in 2050,” he wrote.
The new backbencher called for “practical environmental measures with more boots on the ground and less divisive political debates”.
He called for his colleagues to push for a “massive increase” in Landcare and Coastcare funding to drive investment in practical land, river, estuarine and coastal management.
He also asked his colleagues to pay attention to the “more balanced approach” the Victorian Nationals were demonstrating — an approach “our Canberra leadership would be wise to follow”.
New Deputy Prime Minister Barnaby Joyce’s long history of scepticism regarding climate change has sparked fears the party, under its new leadership, will resist any push to adopt a target of net zero emissions by 2050.
A public supporter of former deputy prime minister Michael McCormack, Mr Chester was demoted from Cabinet for the second time in three years by the new Deputy Prime Minister, after a leadership change three weeks ago.
Mr Joyce rewarded supporters Bridget McKenzie, David Gillespie and Andrew Gee with Cabinet positions, and demoted Mr Chester, Keith Pitt and Mark Coulton from the central ministry.
Commenting on his disappointment following the leadership change, Mr Chester said politicians were “sent to Canberra to fight for them, not to fight each other”, and assured constituents he would recontest the seat of Gippsland in the next election.
Mr Chester holds the safe Nationals seat with a two-candidate preferred margin of 16.67 per cent.
Mr Chester downplayed any conflict between himself and Mr Joyce, insisting he wasn’t interested providing a running commentary in his colleagues.
While there have constituents on both sides of the political spectrum encouraging Mr Chester to go independent, he has reaffirmed his allegiance to the National Party.
Victorian state Nationals politicians have also made their discontent over Mr Chester’s sacking public, with Gippsland East MLA Tim Bull insisting Mr Chester shouldn’t have been “dropped from the A-team”.
There have been media report of a rift between the state and federal National divisions, with state leader Peter Walsh unsuccessfully moving to cut ties with the federal party at a recent board meeting.
The ABC reported the first motion passed at the conference welcomed “moves by agricultural industries to achieve zero net emissions and put in place policies to support farmers to achieve this goal”.
Following the announcement of Mr Joyce’s reappointment, state deputy leader Steph Ryan, who represents Euroa, acknowledged voters wanted politicians to do more on climate change, and said she believed Mr Joyce’s standing among women should have ruled him out of a return to the top job.
Mr Joyce resigned from the party’s federal leadership in 2018, after his extra-marital affair with a staffer was exposed, and a sexual harassment complaint was filed, which he denies.