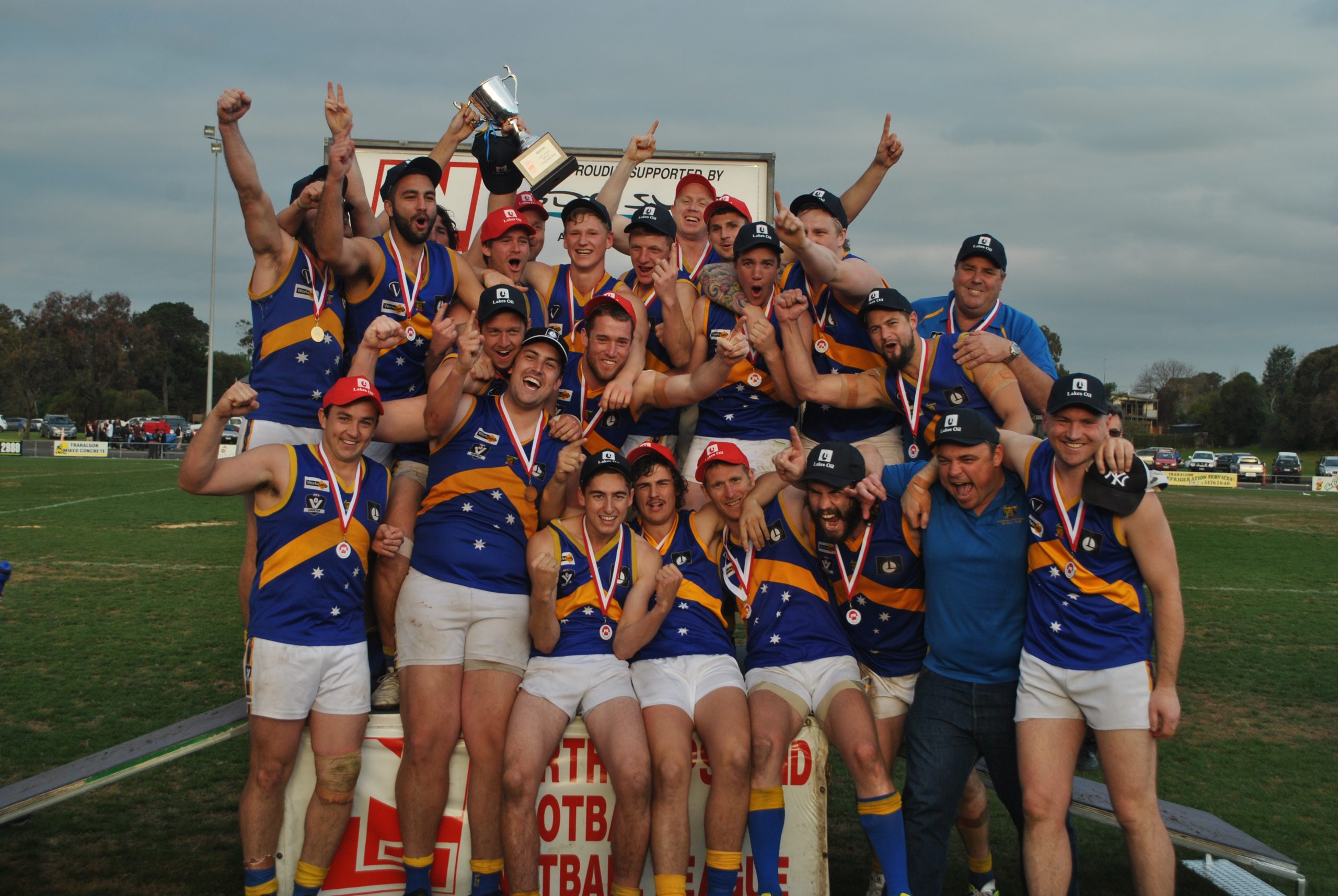 A 20-POINT loss to Churchill in the preliminary final brought an end to Sale City’s 2014 campaign and the club will be looking to go one game further this year.

A solid pre-season and the acquisition of a number of senior players should bolster the Bulldogs’ list as they look to win their first premiership since 2011. Former West Adelaide player David Piasente and Harrison Kaandorp are among the inclusions, while Byron Shingles is the biggest departure.

With a solid pre-season under their belt and under the astute guidance of Hayden Burgiel, there is no reason Sale City cannot return to the top of the league in season 2015.

From the coach: “We’re definitely better prepared this year than last year. We’ve had some extra time to work on our game plan and we’re pretty happy with where we are at. We’re injury free and in good shape for round one, so top three is definitely the goal.” – Hayden Burgiel

AFTER a disappointing straight-sets finals exit in 2014, Rosedale’s young list will be looking to take the next step this season.

The Blues have welcomed back local boy Ben Macreadie from the SANFL to take the reigns as head coach, while Craig Bourne and Jake Mowat both return from a year off. Brad Caldwell comes back after a stint with Maffra and will once again provide the team with a key target up forward.

Rosedale will also be hoping to showcase former St Kilda player Andrew McQualter in navy blue at some stage throughout the season.

There have been some significant inclusions to a list which has shown it is capable of playing finals and in a year where the competition looks fairly even, an improved season will make Rosedale a scary opposition for all teams.

From the coach: “We’re feeling confident, we’ve had a pretty big pre season so the boys are fit and we’re just looking for them to improve on last year. A top three finish is the aim.” – Ben Macreadie

HEYFIELD suffered another shattering grand final loss in 2014, falling at the hands of Churchill after having not been beaten all season.

The Kangaroos lost a handful of players during the off-season, however coach Damien Birss believes they had made a concerted effort to cover these gaps. Ash Dugan comes across from TTU and will be potent up forward as well as through the midfield, while James Beha and Andrew Lambey will also add to the side.

The loss of Lukas Jenkins, Dave Kelly, Nick Dowse, Mitchell Dowse and Brenton Dinsdale from last year’s grand final team will hurt, but it shouldn’t prevent them from being around the mark again in 2015.

From the coach: “From all reports it’s going to be a close competition. We’re just focussed on the group we’ve assembled and making sure that with our list we’ll be competitive again. We don’t have a huge turn over of numbers because our group is a close knit group that will play for each other. We just cover our ins and outs evenly (every off season) and we hope to keep improving.” – Damien Birss

YARRAM will be hoping to build upon its middle of the road finish in 2014 which saw it miss the finals on percentage. The return of non-playing coach Anthony Pavey is a major boost for the club and the recruitment of a number of key position players will also have a profound impact.

Justin Staley and Chris Pettitt have come across from rival Woodside, while Andrew Kiely will also where red and white.

The Demons look to be an improved side on the field in 2015 and one which should push for a place in the bottom end of the top-five come season end.

From the coach: “Like any side at this time of year we are striving to make an appearance come finals, the club finished one place off that last season, but we know when you look at other clubs and the improvement that has been made we too will have to work hard.” – Anthony Pavey

WOODSIDE finished in fifth place, however the difference between them and the top teams was clear during finals as it was totally outclassed by Sale City in the elimination final.

Fresh off winning a Mid Gippsland league best-and-fairest trophy, Daniel Risol arrives from Newborough to take over the reigns as senior coach and will add a major spark to the Wildcats midfield.

Gavin Stevenson will also add to the senior line-up, however the losses of Chris Pettitt, and in particular Justin Staley, to arch rival Yarram will hurt. Woodside will face up against these two recently departed guns in a round one Good Friday clash at Yarram.

From the coach: “It’s been a good solid pre-season in that the blokes who’ve done a full pre season are as fit as they’ve ever been. It’s a young side, but it’s a good opportunity for a lot of juniors to take the big step up to senior footy.” – Daniel Risol

A DOMINANT grand final win was the pinnacle in a superb 2014 season for a young Churchill side. The Cougars built throughout last season to arrive in peak condition on grand final day and will be hoping to go back-to-back this year.

Captain Chris Williams is still just 21 and will once again be the leader of the midfield, while Ben Holt will be the key target up forward.

The loss of Joseph Whykes to Morwell East will hurt somewhat, however a number of new faces will be eager to taste success.

A dangerous team across the park, with one premiership already under their belt, another one may be in the offering this season for the Cougars if they are hungry enough.

From the coach: “Our aim is to do it again this year, obviously the key is to make the top three and go from there. This year looks as though it will go back to being a very even competition so I don’t think that there will be any easy beats any week.” – Allan Chandler

COWWARR is among a bunch of evenly matched teams who will battle it out for positions in the bottom half of the ladder this year.

The Saints won eight games in 2014 and any improvement on that this year would go close to securing them a finals birth. They have made no significant additions to their side in 2015, so it is hard to see them jumping dramatically up the ladder.

The departures of Tully Faragher and Shane Galea are the big losses for the club, with coach Luke Cooper set to rely on Ben Plozza to lead the forward line.

They should be competitive most weeks, but with the league being so even it is hard to determine just where they’ll finish up come season’s end.

GLENGARRY will be hoping to see some improvement from its young list in 2015, but looks likely to finish around the same mark as last season. Robbie Cahill takes over the reigns as coach from Ryan Potter, who will be a big loss for the Magpies.

Their opening round clash at home against Cowwarr will provide a good guide as to how they will shape up throughout the season.

The inclusions of Sam Clavarino, Daniel Van Dyke and Rob Dawson will provide some additional pace, however the departure of experienced trio Potter, Aaron Winkler and Dean Brooks are a big loss.

From the coach: “Look, we’ve had a couple of very good practice matches against Yallourn-Yallourn North and Yarragon. We’re a very young side this year. We’re (focussing) on the development side of things, but are very impressive with speed and if we can keep improving, with the age level we’re at we can get better every week.” – Robbie Cahill

THE arrival of Jay Neagle as playing coach is a major boost for TTU in 2015. The former Essendon forward will present a high quality target in front of goal for the Bombers, while also providing some flexibility for the side by moving through the backline.

Strong seasons from Neagle, captain Luke Middleton and midfield star Brian Graham will be among the keys to the club’s finals chances this year.

Livewire Ashleigh Dugan has headed to Heyfield, while Daniel Frost is off to Queensland. Chase Saunders comes in from Yarroweyah, Stephen Hawkins arrives from Longwarry and Ricky Jorgensen crosses from Gormandale. The Bombers will be among a group of evenly matched teams fighting for victory each week, but with a reasonably experienced playing list could trouble the better sides.

From the captain: “We’re excited, obviously we had a disappointing year last year and we really want to start the season positively. It’s a cliche but taking it week by week and focusing on what we can control, has been the message all pre season. Jay’s made an immediate impact, obviously having played at the elite level he’s been really positive with our young guys and injected some professionalism into the group.” – Luke Middleton

LUKE Henderson’s side has welcomed a number of inclusions during the off season, as Gormandale attempts to reach the finals for the first time in five years.

The injection of youth will bring with it a lot of additional pace and dare, which the club hopes will keep it in games for longer periods of time.

The loss of Matt Sherridan will hurt their midfield, however a number of inclusions will be asked to cover this void.

The Tigers won five matches in season 2014 and will be hoping to increase that number this year in what will be a very even competition.

From the coach: “We’ve been really busy with our recruiting, and a lot of those are young players which will make us faster. The aim is to return to finals considering we haven’t played finals for five years. Internally we’ll be trying to be more competitive for longer because last year we were competitive in patches. We had two wins from our pre season matches so we’re confident about our form heading in.” – Luke Henderson