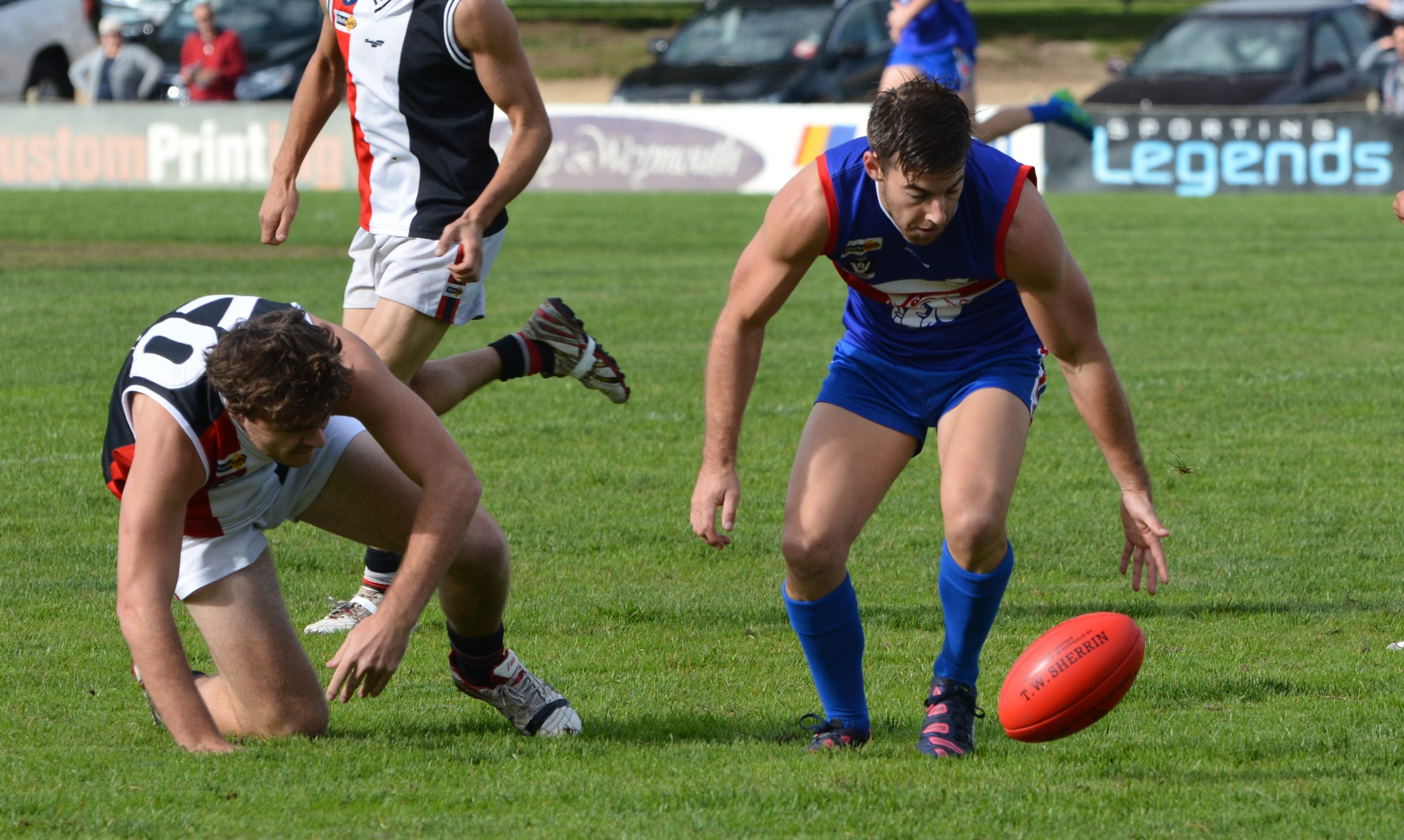 SALE City is the only undefeated side in North Gippsland football following its 26-point victory over a persistent Cowwarr outfit.

It was far from one-way traffic for the competition’s number one side, which was forced to work hard for the points as the Saints proving tough competition.

The Saints began strongly with Pat Tainsh and Shane Morgan influential early to give their side a five-point lead at the first change.

With coach Hayden Burgiel absent, the Bulldogs out-scored the visitors in the second term to lead by three points at half-time. Mitch Bennett made his presence felt with a solid quarter effort.

The Bulldogs mustered plenty of play in the third term, and could have extended the margin further if it wasn’t for a few wayward shots for goal.

The Saints could only trouble the scoreboard for one major, to trail by one of the biggest margins of the contest, 18 points, at the final break.

City was well-served in front of goal by Harry Kaandorp, Keenan Hughes and Nick Grainger who finished with two majors each, while Mitch and Jake Evans were stand-out performers.

DALE Fleming’s only goal of the match in the dying stages gave Rosedale it third straight victory.

Leading by a mere point in the final minute, Gormandale appeared poised to open its North Gippsland season account with victory against a red hot Blues outfit.

In a low scoring first half, which had five majors scored, neither

side was able to break clear Kapun Morris and Wayne Henry getting plenty of the ball as they drilled Gormandale forward.

Rosedale also peppered away at the goals with Gerard Barnes slotting through the Blues’ first major just shy of half-time. The Blues trailed by seven points at the main break.

The goals flowed freely after the long change, the Blues rallied, booting six majors to five during an entertaining third term.

Working hard to reel in the deficit, best-on-ground Jake Mowat and Luke Stuckey, got the Blues going before Fleming slotted through the winning goal.

Rosedale coach Ben Macreadie continued his impressive form of the opening month of the fixture, and was ably assisted by Jeremy Reid, who kicked three goals, and Brandon McDonald.

YARRAM claimed its biggest scalp of the season, defeating Heyfield by 14 points.

Little separated the sides throughout the contest before two late term goals from the Demons gave the visitors victory over the previously undefeated Kangaroos, 15.12 (102) to 12.16 (88).

The Demons led by five points at the first change before the Kangaroos went into half-time leading by two.

The visitors announced themselves contenders during the third quarter, booting clear to hold a 19-point lead at the final break.

The visitors, spurred on by experienced campaigners Grif Underwood and Andrew Kiely, looked to keep the Kangaroos at arm’s distance, but as it often does, the home side kept coming.

The Kangaroos kicked five majors in the final term before time ran out on their fight back.

The Demons shared the goals among 11 goal scorers, while exciting youngster Jari McDonald was named among their best.

Daniel Stevens was again solid for Heyfield, James Beha was crucial in the ruck contests and around the ground, with Josh Stubbe and Jesse Bedggood lively in the forward line.

WOODSIDE worked hard to match the strength and might of Churchill, but faded away following a strong first term.

With scores locked at 3.5 (23) apiece in the first term, the Wildcats dished up some of their best as they ruffled the Cougars early.

The Cougars regained their composure during the second term, booting five goals to one to break out to a commanding 28-point lead, one that they extended to 100 by full-time.

The win, handing sixth-placed Churchill its second win of the season, was engineered by Nick Campbell, captain Chris Williams and Ben Skinner, who kicked five majors.

INACCURACY in front of goal didn’t stop Traralgon-Tyers United from making an emphatic return to the winners’ list.

The Bombers kicked away early and if it hadn’t of been for inaccuracy in front of goal, the margin could have been greater.

The Bombers booted eight goals to one in the first half before adding 14 majors to three in the second.

The Bombers midfield brigade of Graham, Matt Stolarczyk, Marcus Pilgrim and Scott Zuehlke was polished and poised and dominating the contests.

It was a tough outing for the Magpies, who were simply outplayed.

Zac Mangion was their best player.