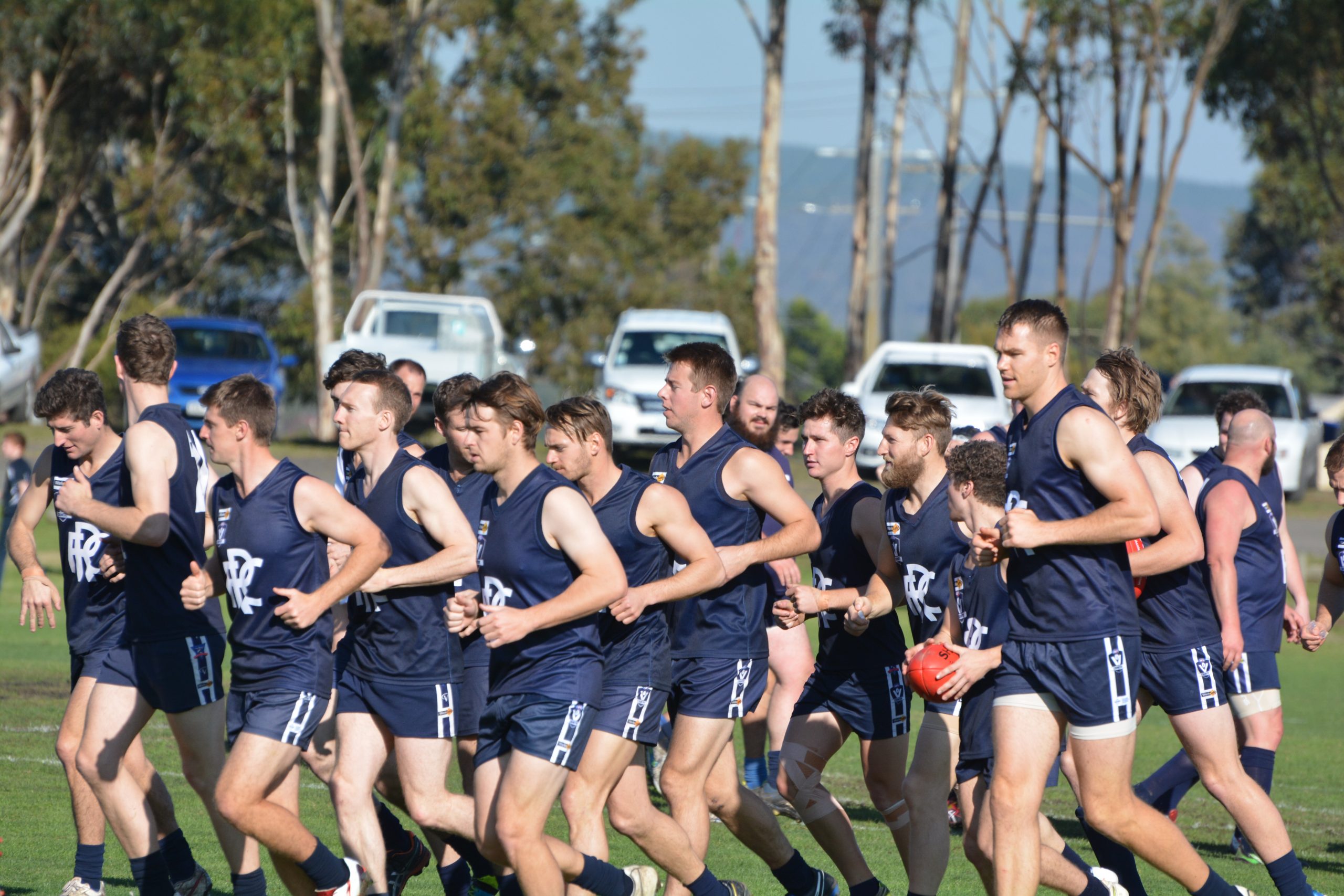 The inclusion of Andrew McQualter, Max Bailey and Tim Clarke to Rosedale’s line-up added yet another dimension to a North Gippsland football game which had already promised a lot.

During the frenetic opening five minutes, Rosedale quickly moved the ball forward with conviction. In what would be a match winning opening term for the Blues, the Kangaroos were left flat-footed as their back line struggled to hold Bailey at bay.

Turnovers and poor ball use looked to have killed off any chance the Kangaroos had of ensuring victory, as they struggled to clear the ball past half-back.

On the burst from the centre clearance, Rohan Diamond sent the Blues forward with Brandon McDonald kicking the opening goal. Coach Ben Macreadie made it two on the run as his side demonstrated the running game he was after.

With the leap of Frazar Brouns matching James Beha in the ruck, Jack Tatterson made it a third goals in the row.

The Kangaroos’ defence were under siege, as Bailey’s 206 centimetre frame caused headaches. The visitors resorted to dropping three defenders back on him, looking to spoil the tall forward in the marking contest.

While that worked to some degree, Bailey quickly brought the ball down with Gerard Barnes propping to pick up the ball and score the home side’s fourth from the goal square.

Bailey opened his account for the match, with several other first term shots going astray.

Ferocious tackling by Jack Woodland, Nic Dowse and Tom McMillan aided Heyfield as it worked hard to hold the ball in its forward 50. A free kick resulted in Luke Pratt scoring the visitor’s only goal for the term.

Trailing by 39 points at the first change, Heyfield was rattled as the Blues made the most of their opponents undisciplined and error ridden play. The panicked visitors at times were reduced to merely hacking the ball out of defence, only to see it land back in the safe hands of a Rosedale forward.

Clarke opened his account as the margin threatened to blow out before Heyfield registered its second goal through Josh Stubbe. However, as they had done early in the piece, the Blues responded through a Brad Scott snap goal.

Josh Stubbe added another for the Kangaroos before majors to Jordon Stubbe and Jack Woodland helped the visitors draw level for the term, with four majors scored by each side.

The Kangaroos had their chances in the third term, but costly misses in front of goal kept them at bay.

The goals flowed during a hard hitting third term which saw Rosedale lose McQualter to a hamstring injury. The Kangaroos began to make their impact felt in the centre clearance count as goal sneak Joel Dinsdale booted some of his five goals for the match.

SECOND-placed Sale City was too classy for Woodside.

Taking some time to settle into the contest, the Bulldogs’ solid second term set the tone as the visitors never faulted against the seventh-placed Wildcats.

Relentless with its ferocious attack on the ball, a signature of the Bulldogs’ style, City ensured a fifth win of the season while kicking seven goals to three in the final term.

Woodside’s Daniel Risol and Ryan Foat kept up the challenge, while Shane Kilgower continued his impressive form of past weeks.

The Magpies found themselves on the back foot early, copping a six-goal opening term blitz by the Demons which killed the contest.

Andrew Kiely (nine goals), Corbin Sutherland (six) and Ryan Underwood (five) were among eight goal kickers for the Demons, who boasted 45 shots at goal on their way to claiming top spot on the ladder.

The Demons didn’t take their foot off the pedal in the final term, slotting home 15 goals to one in a precession which left the Magpies defence under siege.

Glengarry chipped away at the scoreboard, however its lack of forward prowess and a costly final term did little to reduce the margin. Robbie Elrick, Jason Gee and Leigh O’Mara were tireless in their efforts for the Magpies.

For the home side, Kiely continued his dominance of the past month, Underwood has been on song since returning from injury and big man Lukas Jenkins’ presence and agility set-up many passages of play.

DESPITE nine of its best 22 sitting on the sidelines, Traralgon-Tyers United claimed a morale-boosting win over Cowwarr.

Within a goal at the main change, the Saints looked a chance to take the points, but failed to sustain their intensity as the Bombers booted seven goals to three in the second half to record their second win at home, 13.8 (86) to 8.13 (61).

The Saints were perhaps unlucky not to have led at half-time after dominating passages of play, however the pendulum swung the Bombers’ way in the second half as they regained focus and dry-up the visitors’ scoring options.

While only four Bombers kicked goals, their impact was felt by the Saints back six. Lachlan White kicked four goals, while Brian Graham, Chase Saunders and Stephen Hawkins made the most of their chances, booting three each.

WHILE Gormandale out-scored Churchill in the second half, the Cougar’s nine-goal margin at half-time proved telling at the final siren.

Appearing down and out, the Tigers mounted a comeback in the second half, booting 14 goals to 10 to draw to within five goals at the final siren. The comeback was in stark contrast to the first half which had the home side score just 2.4 (16) as the premiers boasted 20 scoring shots for a score of 11.9 (75).

The goals came quick and fast for the visitors, with Chris Williams booting five, Nick Campbell kicking four to take his season tally of 19, and Tim Darby booting three.

The Cougars were at their best early, led by coach Allan Chandler with experienced midfielders Brandon Mahoney and Travis Brighton dictating terms.

The Tigers defensive pressure, which coach Luke Henderson had highlighted as key before the match, improved significantly in the second half as they harassed their opponent into making mistakes and capitalised on the Cougars errors. The home side was well-served by young ruckman Al Jenkins, Ryan Burns and Toby Bye.