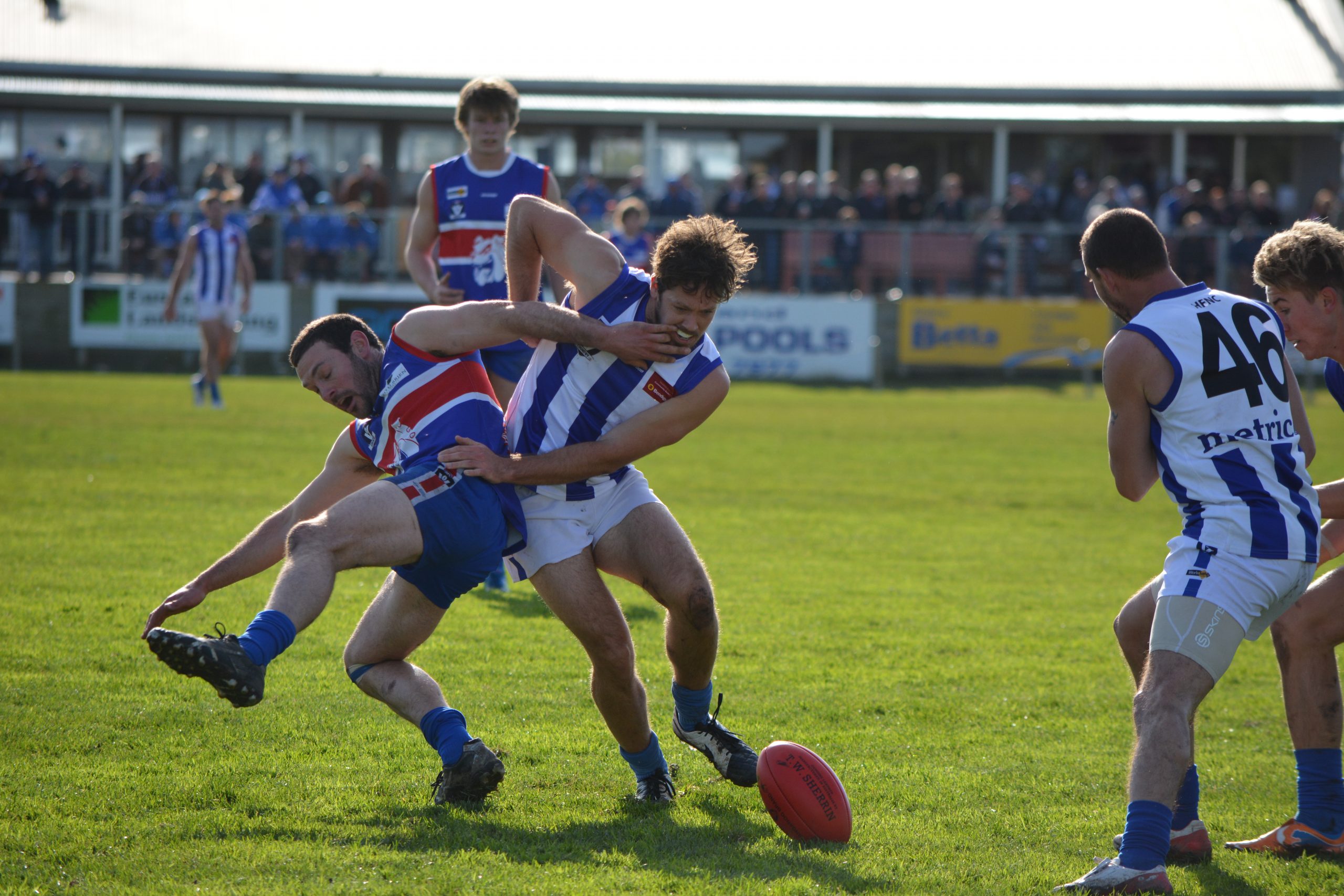 WITH its finals hopes in the balance, Heyfield was defiant against Sale City.

The 9.18 (72) to 8.9 (57) win elevated the Kangaroos from sixth place to fourth on the North Gippsland football ladder, while the Bulldogs relinquished top spot.

Down by nine points at the first change, the Kangaroos’ old firm of defender Scott Anderson, Jesse Jackway, Adrian Cox and Jack Woodland worked hard, making valuable contributions as they placed the visitors two points in front at half-time.

Heyfield worked hard to dominate the contest after the main change, however inaccuracy kept the Bulldogs within 14 points at the final change.

Heyfield’s charge on the scoreboard was led by James Beha, with three goals, Josh Stubbe and Jackway.

The Kangaroos’ defence was staunch against the likes of City’s key forward Jake Schuback, who was held to two majors, with Brad Walsh and Mitch Bennett chipping in with two apiece.

The Blues produced a barnstorming six-goal to nil third term to the kill the contest, turning a four-point half-time lead into a commanding 40-point margin by the final change.

With a top three finish on the line, there was plenty at stake. The sides exchanged blows during a physical opening term.

Rosedale coach Ben Macreadie, Dale Fleming and Rohan Diamond drove the attack on the contested footy against the likes of Yarram’s Grif Underwood and Louis Rodaughan.

Yarram defenders Trek Davis and Chris Pettitt were among the Demons’ best as they looked to contain the Blues’ forwards.

Goals came through the likes of defender Scott Johnstone, who pushed forward to snare two. Rosedale looked to Brandon Henness, Corey Beaver and Jake Mowat, who finished with two goals each, for options up forward.

The visitors led by five points at the first break before they extended the gap to 15 by half-time.

The Saints buried the home side’s hopes of victory with a nine-goal to one third term. Street, Ben Coffey, Linden Brunt, Todd Mann and Marcus Twomey who were the main contributors for the Saints.

The tables were turned in the final stanza as Woodside held Cowwarr to one major as it went about ensuring a respectable score line.

PREMIER Churchill was bundled out of the top five following its 51-point thumping by Traralgon-Tyers United.

Leading by 10 points at three-quarter-time, the Bombers kicked away in the final term, booting seven goals to one.

Six goals from Stephen Hawkins was telling in the Bombers victory, Rhys Martins’ influence around the contest hunting the ball was key with captain Luke Middleton holding his own against the ruck combination of Andrew Brown and Dillon Leys.

ON Sunday, Gormandale chalked up its third win of the season with a comprehensive 14-goal victory over Glengarry.

Jordon Sandy continuing his form in front of goal with four majors, while Al Jenkin popped up in the forward line to finish the match with two.