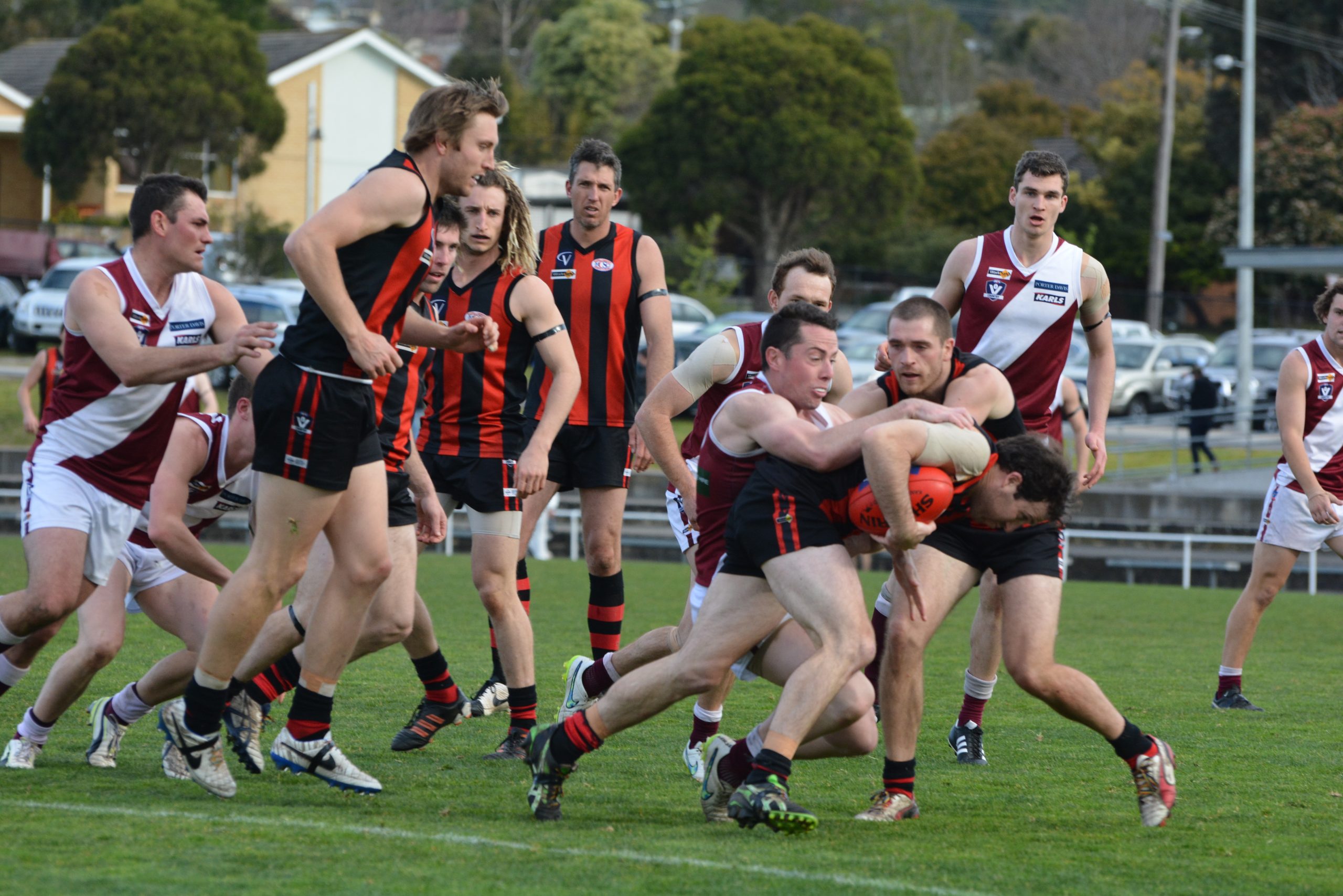 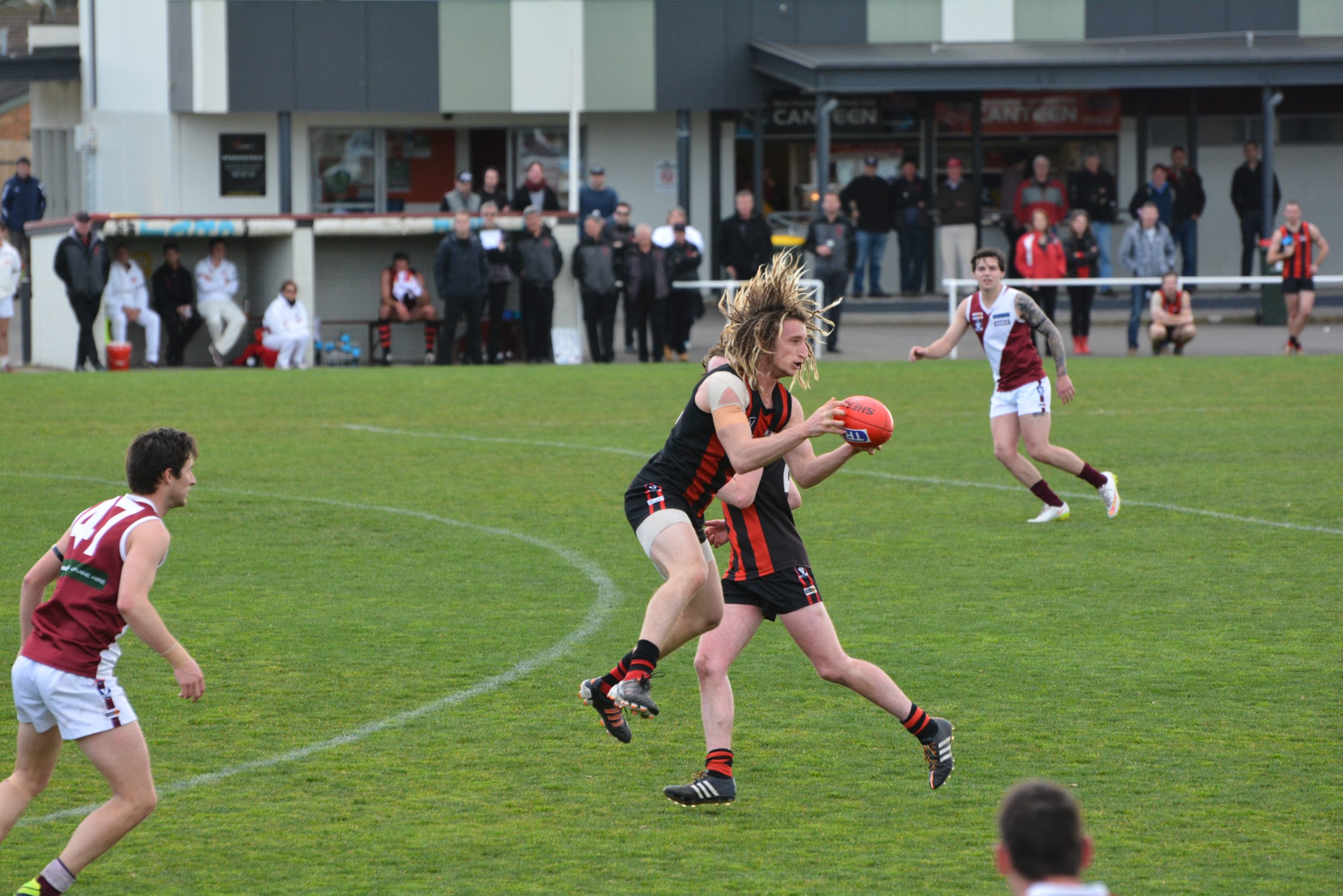 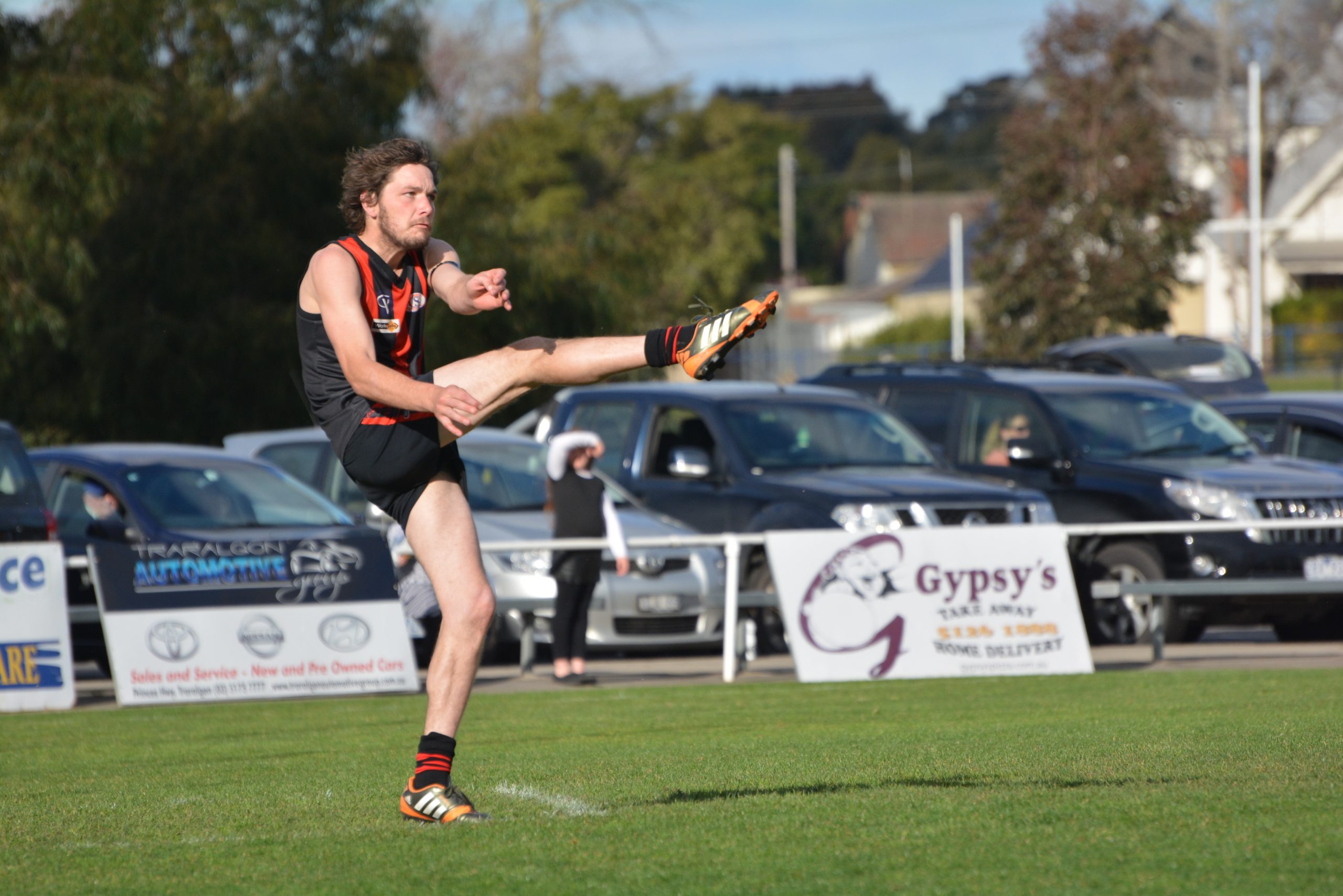 MAFFRA will need to do it the hard way if it is to achieve the ultimate success in season 2015, after losing a fiery Gippsland League qualifying final against Traralgon by 17 points on Saturday.

Despite the final score line, the clash was largely dominated by Traralgon, as the Maroons piled on nine goals to three throughout the middle two quarters on their way to a 14.13 (97) to 12.8 (80) victory.

Having become well-accustomed to one another during two closely fought matches during the home-and-away season, there was plenty of feeling between both sides throughout all four quarters.

Tensions overflowed on the cusp of the half-time siren as more than 25 players engaged in a large melee close to the boundary line. While some members of the crowd were forced to flee their seats along the fence, other onlookers decided to briefly get involved in the fracas, with tension off the field at half-time replicating the feelings on field during the first half.

If Maffra was hoping the push and shove would ruffle the feathers of the Maroons, they were proved terribly wrong.

With club stalwart Michael Geary playing his 200th senior match and having announced to his teammates during the week that season 2015 would be his last, the Maroons appeared determined to make his milestone a memorable occasion.

Both teams used the opening minutes to feel each other out, with neither able to convert their opportunities into goals.

After Traralgon forward Michael Burge missed a number of easy shots, the Maroons finally got the ball rolling with a wobbly Tim Johnson drop punt from the boundary line.

When Johnson ran on to a loose ball and snapped truly a few minutes later, it was clear Traralgon had come to play against their highly fancied opponents.

In typical fashion, the Eagles responded shortly after with some end-to-end play seeing the ball land in the hands of power forward Darren Sheen, who kicked truly to get his side on the board.

With possession evenly split throughout the remainder of the term, neither side could manage to gain the upper hand.

At quarter-time Traralgon held a 10-point advantage, with inaccurate kicking the only thing stopping it from having a greater lead.

At the first change, Maffra coach Wayne Butcher urged his players to lower their eyes and be more decisive when looking for a forward target, to avoid the large number of Maroon jumpers being dropped into defence. However, that message seemed to fall on deaf ears, as the Eagles continued to bomb the ball in long towards their star forwards Sheen and Andrew Petrou in the second term.

Despite finishing with three majors for the match, Sheen was once again well-held by powerful Traralgon defender Adrian Slottje, who got the better of numerous one-on-one duels between the pair.

The forward line set-up will need to be a point of focus for Butcher ahead of this weekend, with Daniel Bedggood evidently playing injured and Sheen left to carry the load far too often.

At the other end of the ground, Maffra was paying close attention to Traralgon forward Dylan Loprese, a move which backfired early in the second term when a free kick for holding off the ball handed the Maroons their first major of the term.

With the Maroons’ defence standing strong and their forwards firing, their midfield began to dominate the game. Geary, Tim Northe, Matt Northe and coach Mark Collison all racked up the possessions and used the ball efficiently around the ground.

The Maroons kicked the first three of the term to create a handy buffer by the half-way mark of the quarter, one which they held onto throughout the term as both teams wasted multiple opportunities.

While 25 points separated the sides on the scoreboard at half-time, nothing could separate them physically as the siren sounded. Andrew Petrou refused to let go of Collison at a boundary throw-in, a move which drew the ire of a number of Traralgon teammates.

When full-back Matthew Lewellin came in to throw his weight around, tempers boiled over.

Despite numerous threats, the umpires kept their yellow and red cards in their pockets and allowed both teams to emerge from the rooms in the second half with 22 players.

While the lead at half-time was not beyond the reach of Maffra, another dominant term by Traralgon in the third quarter essentially ended any hopes the Eagles had of a comeback victory.

Milestone man Geary slotted a set shot early in the third term, the first of five Maroon goals for the quarter.

With no dominant target up forward, the Maroons stretched Sam Pleming and the Eagles’ back line by regularly finding loose targets or one-on-one match ups inside 50.

While late goals to Petrou and Danny Butcher gave their side a small window of hope, the Eagles were realistically not playing well enough to bridge the divide.

With the match having largely replicated the round 16 clash between the two sides for the first three quarters, Traralgon coach Collison stressed to his troops the importance of keeping their foot on the accelerator to avoid a Maffra comeback. However it seemed only fitting that Maffra would mount some sort of charge in the final term, but despite the Eagles kicking four more goals than their opponents for the quarter, the damage had already been done.

Danny Butcher kicked two goals for the match and was among his side’s best, while Petrou and ruckman Trent Knobel were among the few to compete for four quarters.

The Eagles will need to quickly lick their wounds ahead of a semi-final showdown with Wonthaggi this Sunday. After last year’s disappointing elimination in the first week of finals, the importance of securing a double chance has been a point stressed by Butcher all year.

The experienced man at the helm of the Eagles knows his side is good enough to win the premiership, however it cannot afford another slip up if that dream is to become reality.

Traralgon will march into the major semi-final full of confidence, knowing that its attacking brand of football is good enough to match it with the might of Leongatha.

If results go as expected, this may not be the last time Maffra and Traralgon clash this finals series.

IN the under 18s, Maffra defeated Traralgon by 33 points to move one step closer to securing a grand final berth.

Sean Day and Jarred Jans both kicked three goals for the Eagles, who will now face Bairnsdale in this weekend’s second semi-final.

MOE proved too strong for Maffra, winning the under 16s qualifying final by 38 points.

TRARALGON will play Maffra for a spot in the Reserves grand final after an impressive 25-point victory over Leongatha.

There were numerous lead changes throughout the tightly fought match, but it was the Maroons who were in front at the final siren, securing the win 8.12 (60) to 5.5 (35).