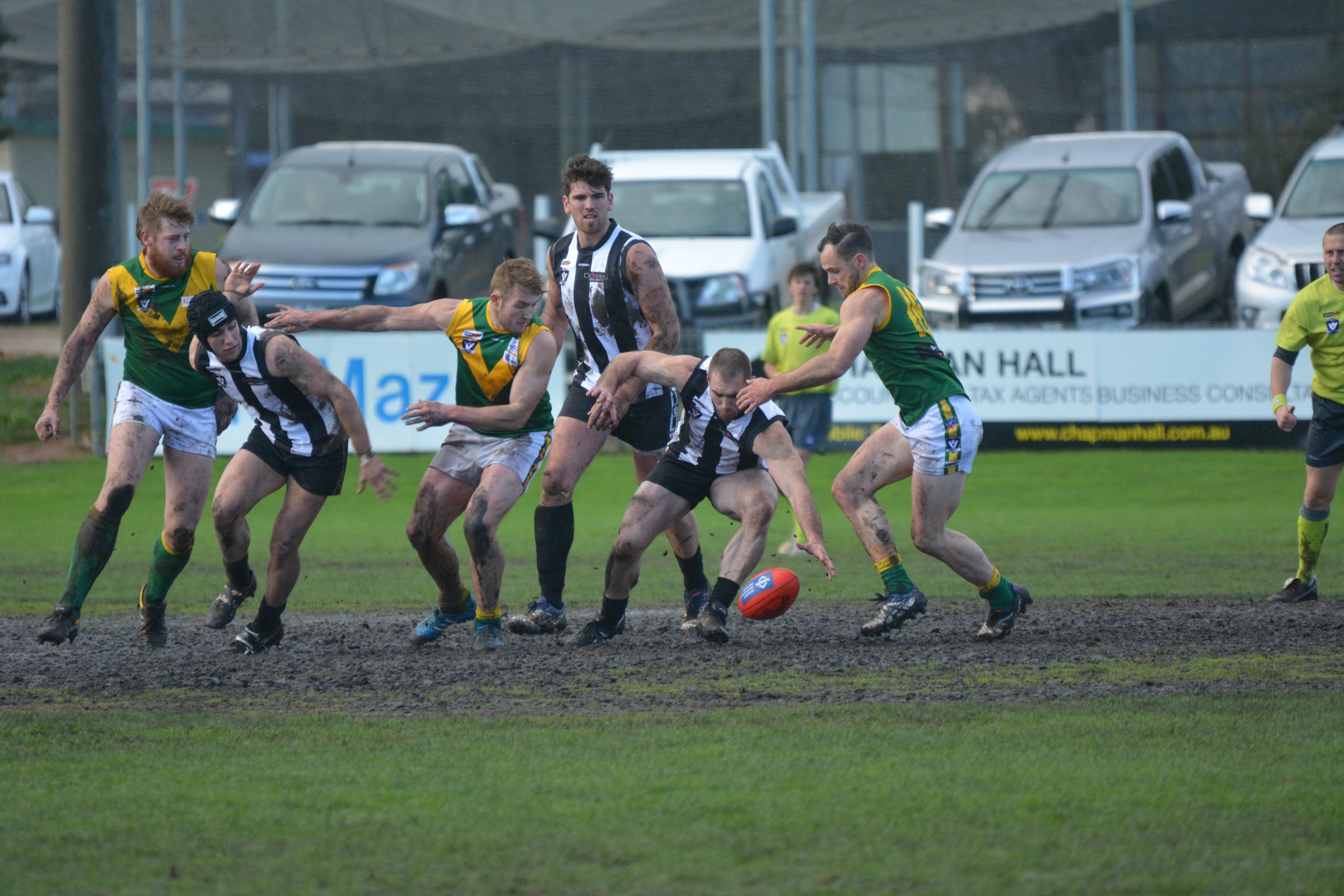 RELATED: Maffra wins in the mud

GIPPSLAND League football ladder leader Leongatha kicked away in the mud at Sale to record a 53-point victory.

The Magpies’ total was their lowest ever against the Parrots, nine fewer than their previous mark set in 2004.

The Magpies gave it their best shot in wet, windy and heavy going at Sale on Saturday.

Club officials had to work hard in the early hours to get water off the ground, but a few players slipped through the wet patches. During the final quarter, John McIntyre looked like he could have used a surfboard when he slid into the water at the social rooms end of the ground.

The undefeated Parrots are premiership favourites, and looked like a team on a mission to make amends for their grand final loss last season.

The Magpies were only 10 points down at half-time, but after Jack Lipman kicked a goal for Sale early in the third term, the Parrots went into another gear. The visitors booted seven goals in the second half, while preventing the Magpies kicking another.

Around the ground, the Magpies had their share of centre clearances, while their defenders worked hard against the Parrots’ talented forwards. The Magpies’ final score was not an indication of the time they went inside their forward 50, but many of their promising moves were cut off by Leongatha defenders, who took intercept marks, played on and hit targets up the ground with low well-directed kicks.

Young Kyle Dunkley, younger brother of the Western Bulldogs’ Josh, made his senior debut with Sale. Like Josh, Kyle has the talent to eventually achieve his aim to play in the AFL like their father Andrew.

Cody Henness, who was home from Gippsland Power, was Sale’s best player, while Andrew Quirk also had plenty of the ball.

Jamie Sweeney was good in defence, Kane Martin worked hard to bring teammates into the match, Lochie Ronchi is doing well at this level, and Lipman played his usual strong game in the ruck.

Leongatha did not have any passengers, with Joel Sinclair, Tom Marriott, Lochaln Dumont, Luke Bowman, Ben Willis and Hayden Browne their better players.

TRARALGON rebounded from their upset loss at Sale last round to thrash Bairnsdale at home.

The Maroons were ruthless in the wintry conditions, winning 10.18 (78) to 0.4 (4). It was the Redlegs’ second lowest score, have posted just two points against the Maroons in 1998.

The win keeps the Maroons safely in the top three.

DROUIN moved within two points of the top five after a 15-point home win over Moe.

Having kicked their lowest score against the Hawks in this league, the Lions remain eight points behind fifth spot.

Wonthaggi’s score was its lowest against Warragul, while the match aggregate of 55 points is the lowest ever between the clubs.

Both of the Power’s goals came in the first term, before the Gulls adapted to the conditions to kick four unanswered majors.

Both sides are locked on 28 competition points, with Warragul moving into fourth place by less than one per cent.