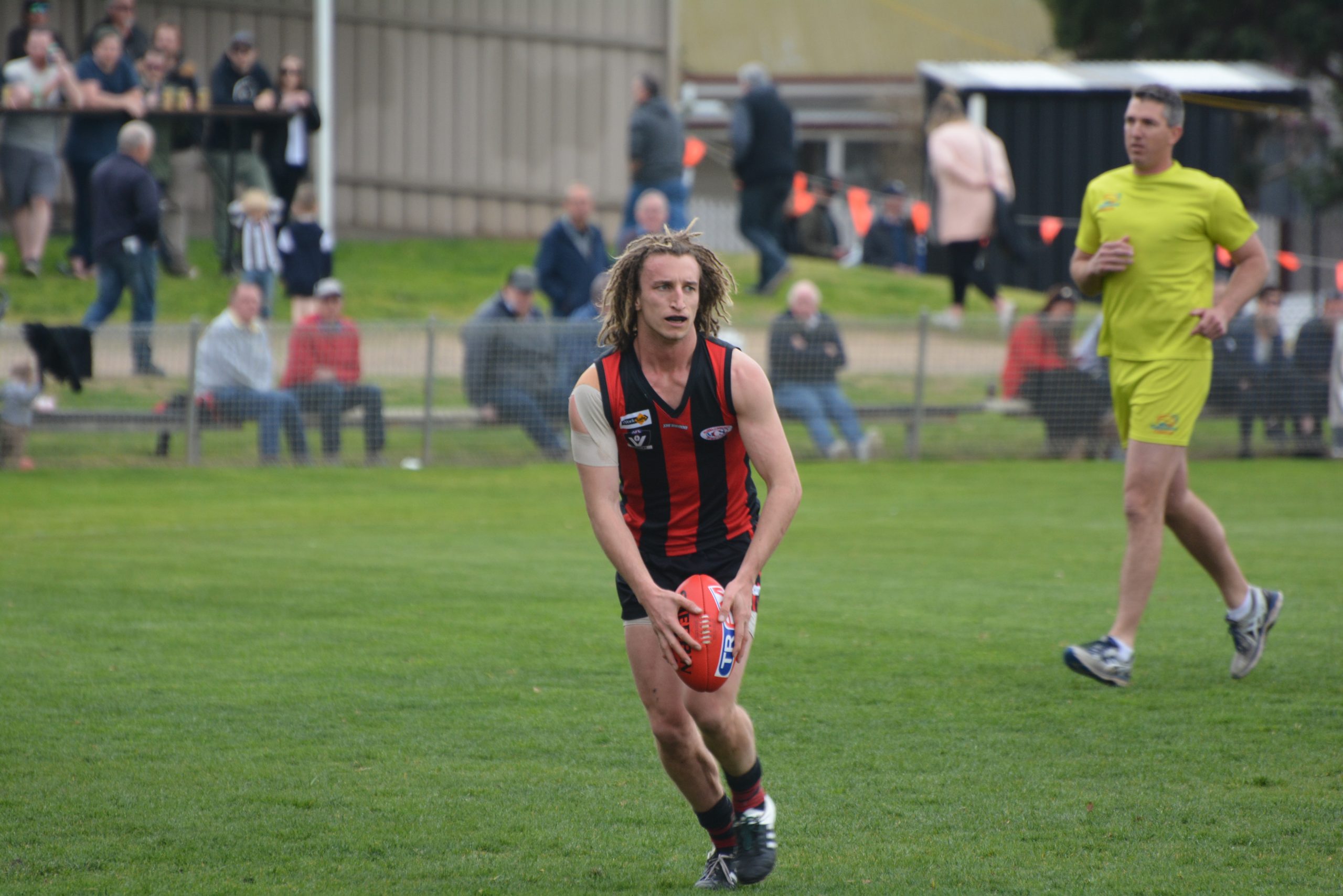 MAFFRA will have to go the “long way” if it’s to successfully defend its Gippsland League football premiership.

The loss means the Eagles will play Moe in the knock-out first semi-final on Sunday at Sale.

The Maroons will take on minor premier Leongatha in the second semi-final this Saturday at Moe.

The Eagles had included David Adams and Jarryd Clohesy, with captain Sam Pleming a late inclusion for James Huts.

Goals from Kel Porter, Mitch Bennett and Darren Sheen gave Maffra the ascendency in the first quarter. Holding the Maroons goal-less, the Eagles led by 20 points at quarter-time.

With the Eagles out-running the Maroons, coach Wayne Butcher implored to keep up the intensity.

With spots of rain, greasy conditions challenged both teams.

Traralgon kicked the only two goals of a tight second quarter through Dylan Loprese and Haydn Hector, but the Eagles remained eight points ahead at the main break.

Jay Neagle kicked a goal for Traralgon in the opening minute of the third quarter.

With Traralgon leading by one point, it wasn’t until the 20th minute that the second goal came, after Kade Renooy’s kick found Bennett in space.

In the 22nd minute, Rohan Hildebrand’s goal put Traralgon back in front. Four minutes later, Bennett kicked a long goal to give the Eagles back the lead.

Maffra led by five points at three-quarter-time. The Eagles had enough of the ball, but mistakes and a determined Traralgon defence reduced their lead.

Matt Northe kicked a goal in the first minute of the final term to put Traralgon in front. The Eagles returned the front soon after when Sheen kicked a goal.

The Maroons led again after Tim Northe’s major 10 minutes into the quarter.

Michael Stockdale kicked a goal from the boundary to extend the margin to seven points midway through the term. The Eagles got the quick reply through Danny Butcher.

Heading into time-on, Lee Stockdale kicked a goal for the Maroons after a Maffra turnover, extending the margin to eight points. When Neagle kicked a goal from 50 metres out, the match was Traralgon’s.

A lot of the credit for Traralgon’s victory must go to its defence, led by Bailey Cameron and Michael Stockdale, while Dylan Loprese was prominent across half-forward

Bennett kicked three goals for the Eagles, while Porter and Winston Gieschen led the way in the midfield.

In the reserves, Leongatha came from 10 points down at the final change to defeat Traralgon 9.7 (61) to 8.7 (54). The Parrots will play Maffra next Saturday in the second semi-final.

MOE knocked Morwell out of the premiership race with a 14.14 (98) to 8.5 (53) victory in the elimination final on Sunday at Traralgon.

The Tigers led by four points at quarter-time, but the Lions took control with five unanswered goals in the second term. The Lions kicked seven goals to five in the second half.

The season ended for both of Maffra’s junior teams on Sunday.

The under 18 Eagles lost to Bairnsdale 7.11 (53) to 5.5 (35). The Redlegs led by four points at three-quarter-time before they kicked six unanswered goals in the final term.

Under 16s: Bairnsdale v Leongatha, 9am.