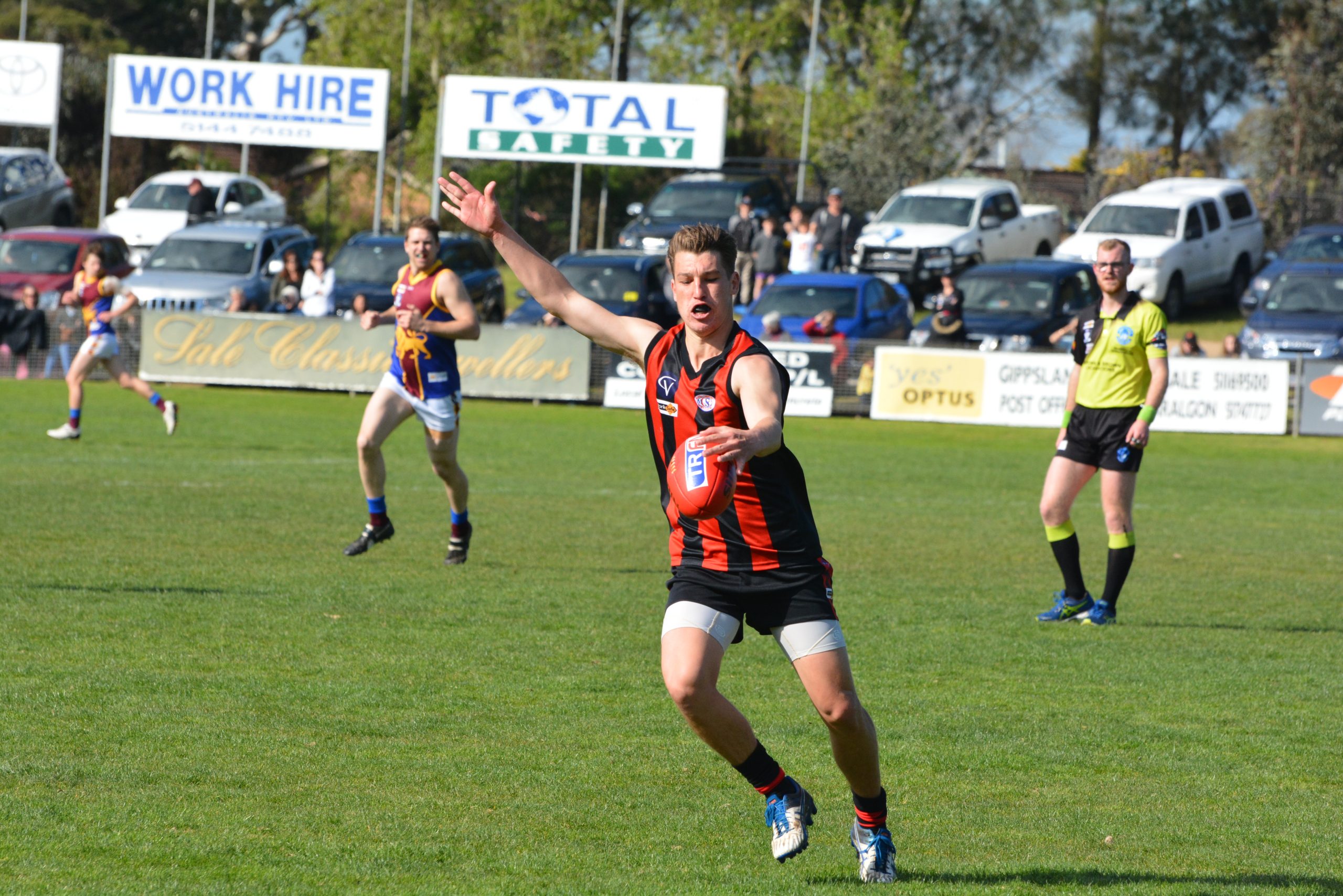 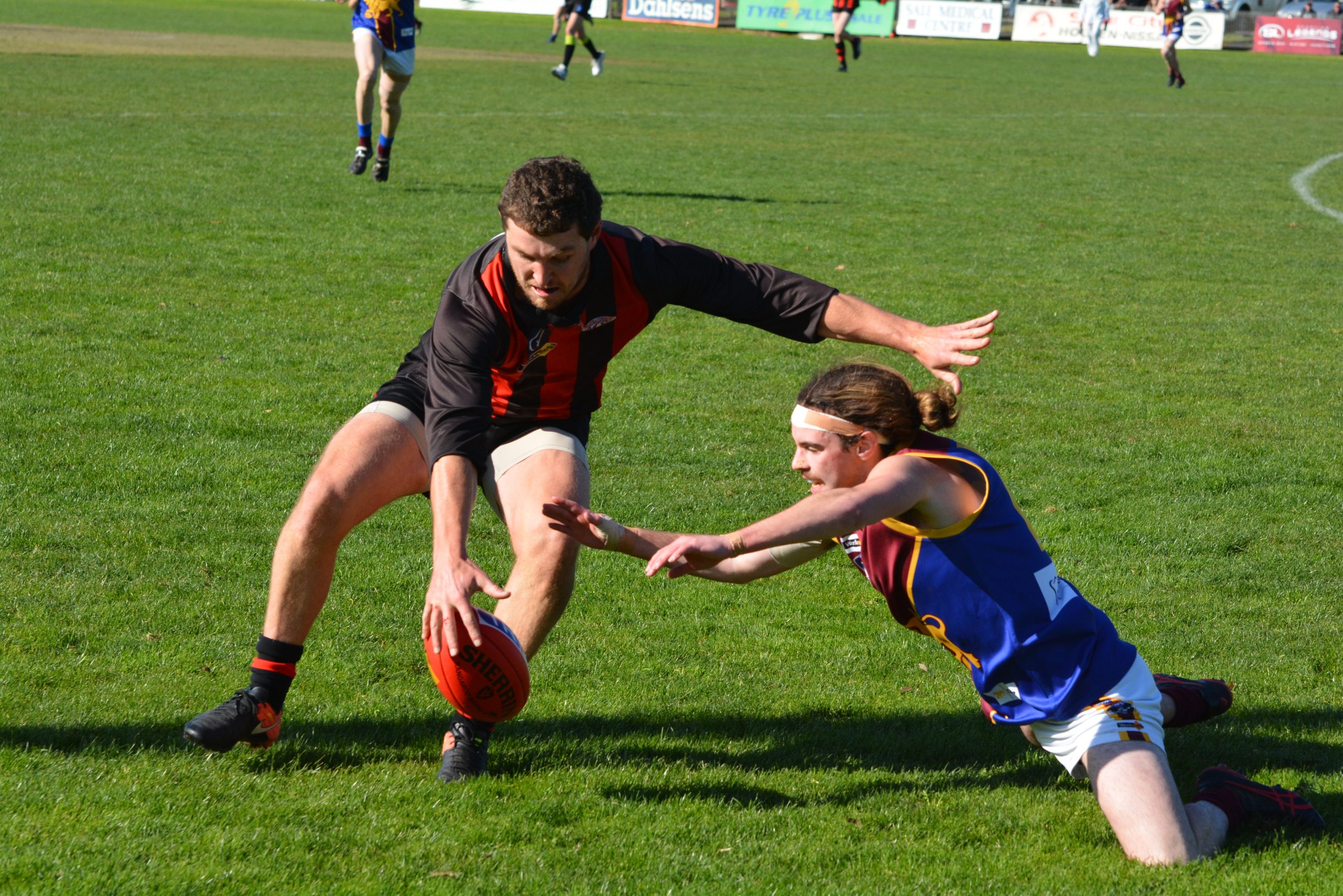 MAFFRA overcame Moe and remain in the hunt for the Gippsland League football premiership.

The Eagles were outstanding in attack, led by Mitch Bennett, who kicked six goals, and Daniel Bedggood, five. While he didn’t kick a goal, Darren Sheen was instrumental in setting up scores.

Alex Carr was a driving force through the midfield, while Jack Johnstone and Sam Walker were prominent in defence.

On a sunny spring day at Sale Oval, the Eagles had more of the ball in the first quarter, but weren’t getting the reward on the scoreboard until Bennett’s opening goal in the 13th minute.

Bennett kicked all three first quarter goals, while the Lions failed to trouble the scoreboard attendant, as the Eagles led by 24 points at the first break.

The Eagles were running hard, moving the ball quickly and applying pressure, preventing the Lions from attacking.

Moe’s first score came in the opening minutes of the second, when Scott Van Dyk booted a goal.

The Eagles responded with the next four goals.

Carr kicked to an open Bedggood, who kicked his first goal in the fifth minute. Three minutes later, Bedggood had his second.

Bennett kicked his fourth goal on the quarter-hour mark.

Carr’s goal from 45 metres out gave Maffra a 41-point lead early in time-on.

Daniel Risol kicked a goal for the Lions just before half-time, with the Eagles 35 points in front.

The Lions had the better of play to begin the third quarter, with coach James Blaser goaling after receiving a free kick, but the Eagles regained control.

A patient Lachlan Channing set-up a goal for Danny Butcher before a chain of handpasses was ended by a Tom Jolly goal.

Moe squandered chances to make inroads into the deficit, with Jacob Wood kicking its second and final goal of the term approaching the half-hour mark. The Eagles won the resulting centre clearance through Kel Porter, who kicked the ball to Jolly, who passed it to Kade Renooy to kick a goal seconds before the three-quarter-time siren.

Leading by 44 points at the final change, the match was in Maffra’s keeping.

The Eagles out-scored the Lions in the final term, kicking six goals to four.

Moe’s best player was Charlie Rieniets, who played well on Sheen. Col Sanbrook and Blaser played well in the midfield.

In the reserves, Morwell won a thriller, defeating Traralgon by one point, 8.8 (56) to 8.7 (55). The Tigers will meet Maffra in the preliminary final.

LEONGATHA booked a spot in a third consecutive grand final with a 28-point victory over Traralgon in the second semi-final.

The minor premiers kicked four goals to one in the first term to set-up the victory.

Trailing by 28 points at half-time, the Maroons issued a challenge during the third term, kicking three goals to one to reduce the deficit to 14 points at the final change.

Goals from Aaron Hillberg and Tom Marriot early in the fourth term ended any realistic hopes the Maroons had to staging a comeback victory. The Parrots kicked four goals to two for the quarter.

Ben Chalmers and Sean Westaway were outstanding in defence for Leongatha, while Ben Willis was solid in attack and the ruck. John Ginnane kicked three goals.

For Traralgon, Ben Amberg was good in the ruck, while Hadyn Hector played off across half-forward.

Leongatha also progressed to the reserves grand final after defeating Maffra 6.9 (45) to 4.3 (27). The Eagles will get a second chance of making the grand final this weekend against Morwell.

Under 16s: Traralgon v Leongatha, 9am.