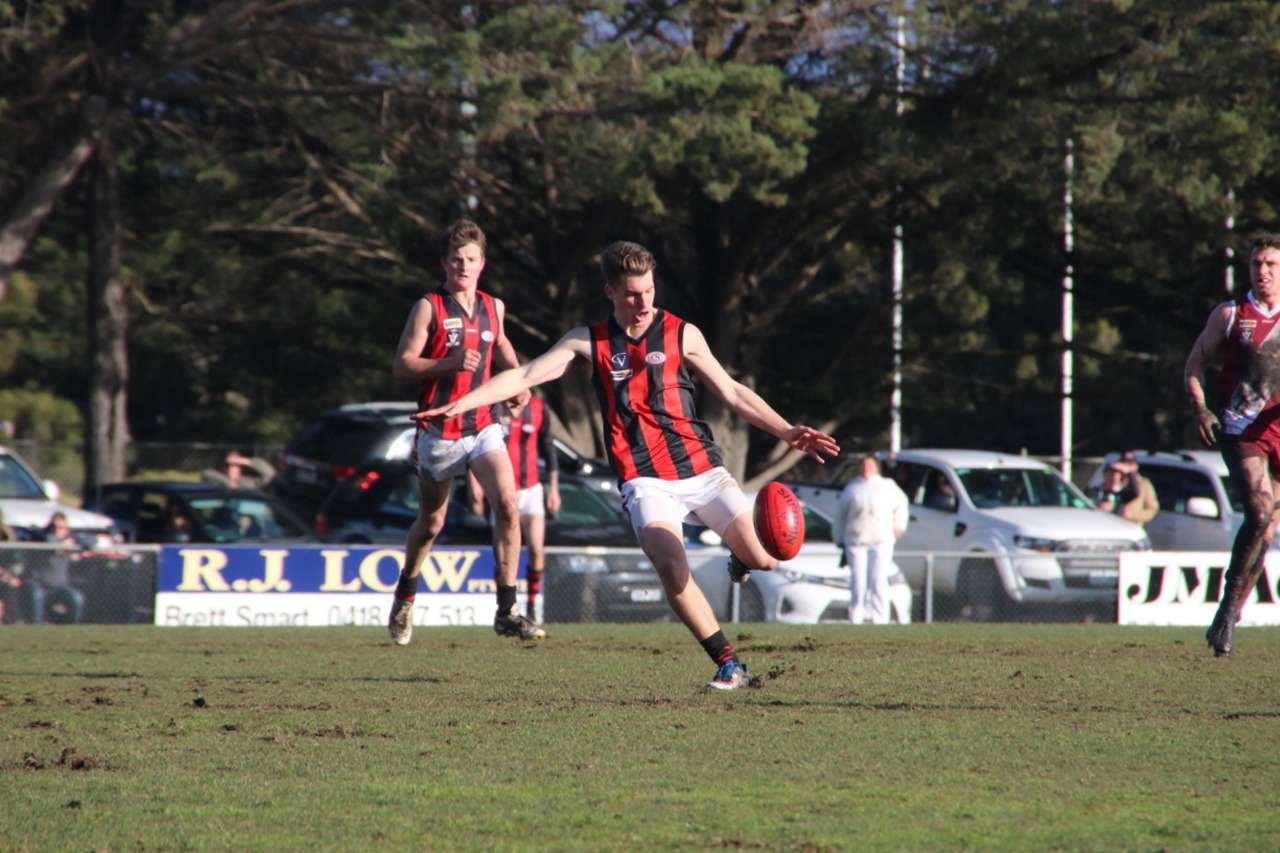 MAFFRA kicked six goals to one in the fourth quarter to earn a place in the Gippsland League football grand final.

In Saturday’s preliminary final, the Eagles trailed Traralgon by four points at three-quarter-time, before storming home to win 13.8 (86) to 8.13 (61). They will meet Leongatha in the grand final next Saturday at Moe.

Both teams had periods when they had most of the possessions, but Maffra’s ability to use their time in control better was a telling factor in the result.

Both teams had 21 scoring shots, but the Eagles kicked five more goals.

The Maroons rattled their opponents during the second and third terms, but once they regained their composure, the Eagles took control of the contest.

Rain during the week made the Morwell Recreation Reserve muddy, but the surface, although still soft, firmed up by the time senior match began.

Maffra onballers Kel Porter, Alex Carr and Jack Johnstone weren’t deterred by the soft ground, hard at the ball and moving it well. Carr, in particular, providing strong clearances from the packs.

While Loprese kicked three goals on him, Andrew Petrou was outstanding in defence.

A long kick from Carr found Renooy, who kicked the first goal of the match in the fifth minute.

Traralgon was in front within minutes after goals from Loprese (after a 50 metre penalty) and Tim Northe.

Bedggood kicked a goal from a tight angle against the breeze to level the scores, before a long kick from Dylan Alexander resulted in Renooy’s second major.

Out-running the Maroons, Maffra appeared to be kicking into its forward 50 with more purpose than its opponent.

Bedggood’s second goal helped give the Eagles a 14-point break at quarter-time.

The Eagles hopes were boosted when Lee Stockdale was shown a yellow card on quarter-time for a hit on James Whelan. Stockdale was off the field for the first 15 minutes of the second term.

While Maffra was kicking with the aid of the breeze, Renooy’s goal in the early minutes of the second term was the Eagles’ only major of the quarter.

Maffra led by 22 minutes heading into time-on, but the Eagles’ ill-discipline allowed the Maroons to get back into the match.

After missing a shot for goal, Loprese received another free kick after a knock by James Huts. Loprese made no mistake a second time.

With the Eagles frustrated by the Maroons’ antics, Carr was shown a yellow card.

Shortly before half-time, Rohan Hildebrand kicked a goal the Maroons’ third goal for the term, after another 50m penalty.

The Eagles led by two points at the main break.

The Maroons dominated the third term, but it didn’t show on the scoreboard. They kicked 2.7, as the Eagles’ defence did well to absorb the Traralgon attacks.

Against the run of play, Winston Gieschen kicked the opening goal of the term for the Eagles to give them a four-point lead.

Goals from Matt Northe and Loprese gave the Maroons an eight-point advantage. Mitch Bennett’s goal cut the deficit to two.

Maffra was back in front in the opening minutes of the final term, after Johnstone combined with Bedggood to get the ball to Sheen.

Renooy kicked his fifth from the pocket. After goals from Bennett, Bedggood and Johnstone, Maffra was 32 points in front.

The Eagles weren’t allowing the Maroons to roam unattended, forcing turnovers and making their opponents pay for their mistakes.

A late goal from Jake Bishop was merely a consolation for the Maroons.

Ben Amberg worked hard all day for the Maroons in the ruck.

THE Maffra reserves lost their preliminary final to Morwell.

After finishing the home-and-away season on top of the ladder, the Eagles were knocked out of the premiership race with consecutive finals defeats.

The Tigers adopted the muddy conditions better, kicking the first four goals of the match. The Tigers were more efficient when entering their forward line.

MOE will play Traralgon in the under 18 and 16 grand finals.

The Maroons won both junior preliminary finals against Leongatha.

In the under 18s, Traralgon defeated minor premier Leongatha 8.10 (58) to 5.4 (34). The Maroons led by a point at half-time, before kicking four goals to one after the main break.