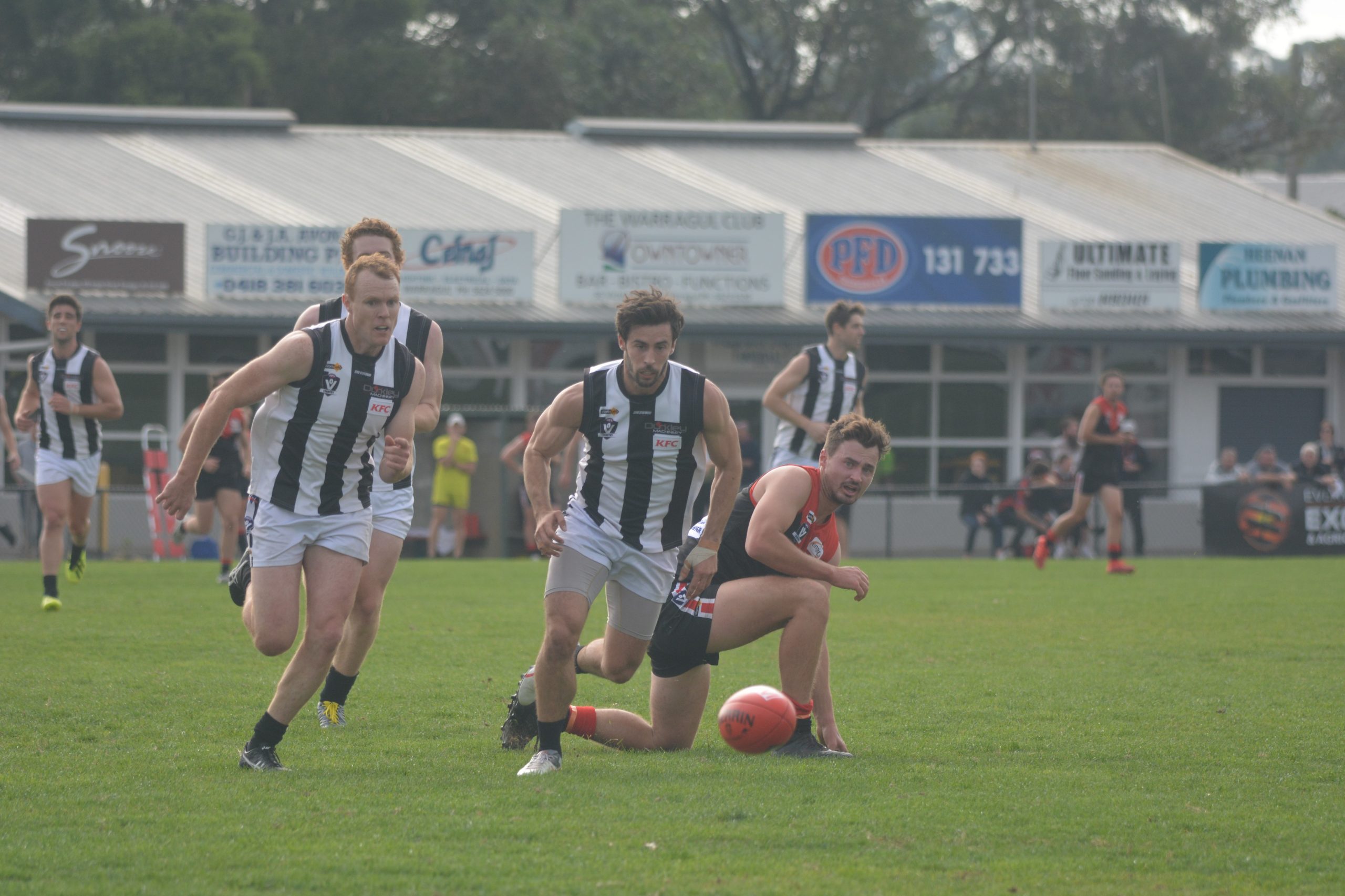 SALE recorded a comprehensive 31-point victory over Warragul during round two of Gippsland League football.

A trip to Western Park is always viewed as a dangerous proposition for teams from the east, with Saturday’s encounter shaping as another tough match.

The Magpies had five forced changes from the round one line-up, handing debuts to Ethan Dyer, Kyle Simpson, Josh Ryan and Jack Rietschel, while returning Gippsland Power player Luke Williams settled into the defence.

As both teams found their feet early the Magpies’ forward pressure was outstanding, led by Brad Dessent.

Warragul’s defence was made to feel threatened at every opportunity, this created numerous chances for the Magpies’ fleet-footed midfield such as Mitch Dowse and Kane Martin, who swooped on anything at ground level.

The Magpies opened up a 21-point lead in a four-goal opening term.

The outstanding pressure and threat of the tall targets up forward forced Warragul to change tact. Extra Gulls were pushed into defence and opposition coach Ben Hughes moved on-ball to provide more physicality.

Despite this, the intensity at the contest of the Magpies did not flounder and with such an inexperienced side it was the debutants who flashed in and out of the game, providing the spark for the Magpies.

Rietschel’s errant goalkicking cost him a couple of majors, while Ryan’s two-bounce goal from 45 metres was a great reward for effort. The contests created up forward by Daine McGuiness and Brad Dessent could not be questioned.

The Magpies were all over Warragul as their defence excelled, allowing the Gulls only two goals for the half, while slotting seven themselves.

Warragul persisted with similar tactics at stages in the third quarter, the onset of numbers around the contest at times forcing the Sale back line to defend hard. Sale’s composure and experience down back was pivotal.

The Magpies broke through with a Mitch Dowse goal.

As tensions boiled over, Warragul gave away a 50m penalty, gifting Tom Hams a goal before forced skill errors down back meant the ball landed in the hands of Jordan Dessent, who retrospectively sealed the match with a long goal late in the third quarter for the Magpies.

A 45-point lead at the beginning of the fourth looked too much for Warragul, but reminders of last year’s close encounter from a similar position were evoked when the Gulls kicked the first three goals to bring the lead back to 27 points.

Coach Shane Fyfe was clearly pleased with the outcome, praising his young and inexperienced combatants. The expectation and standard of role playing within the group was a key factor in the win.

Hams was clearly best-on-ground, his marking around the ground, decision making and cleanliness by foot outstanding.

Mitch Dowse was again bullocking, and his two goals aided, by his ability to play inside and outside, is a dangerous prospect for opposition teams.

The ever-reliable skipper Jordan Dessent and Martin injected their experience where necessary. They were pivotal when the game was there to be won.

Mitch Thacker was terrific down back, effectively forcing Warragul coach Hughes to change roles, while Chris Laverty, Dyer and Nic Dowse were all accomplished in their composure, willingness to compete and decision making.

The Sale forwards worked tirelessly, with their commitment to structure and forward pressure a highlight.

The Magpies are now 2-0, but have a tough game at Maffra on Good Friday. The hard work and commitment shown by the group will be tested by the league’s perennial powerhouse and closest rival in the Eagles.