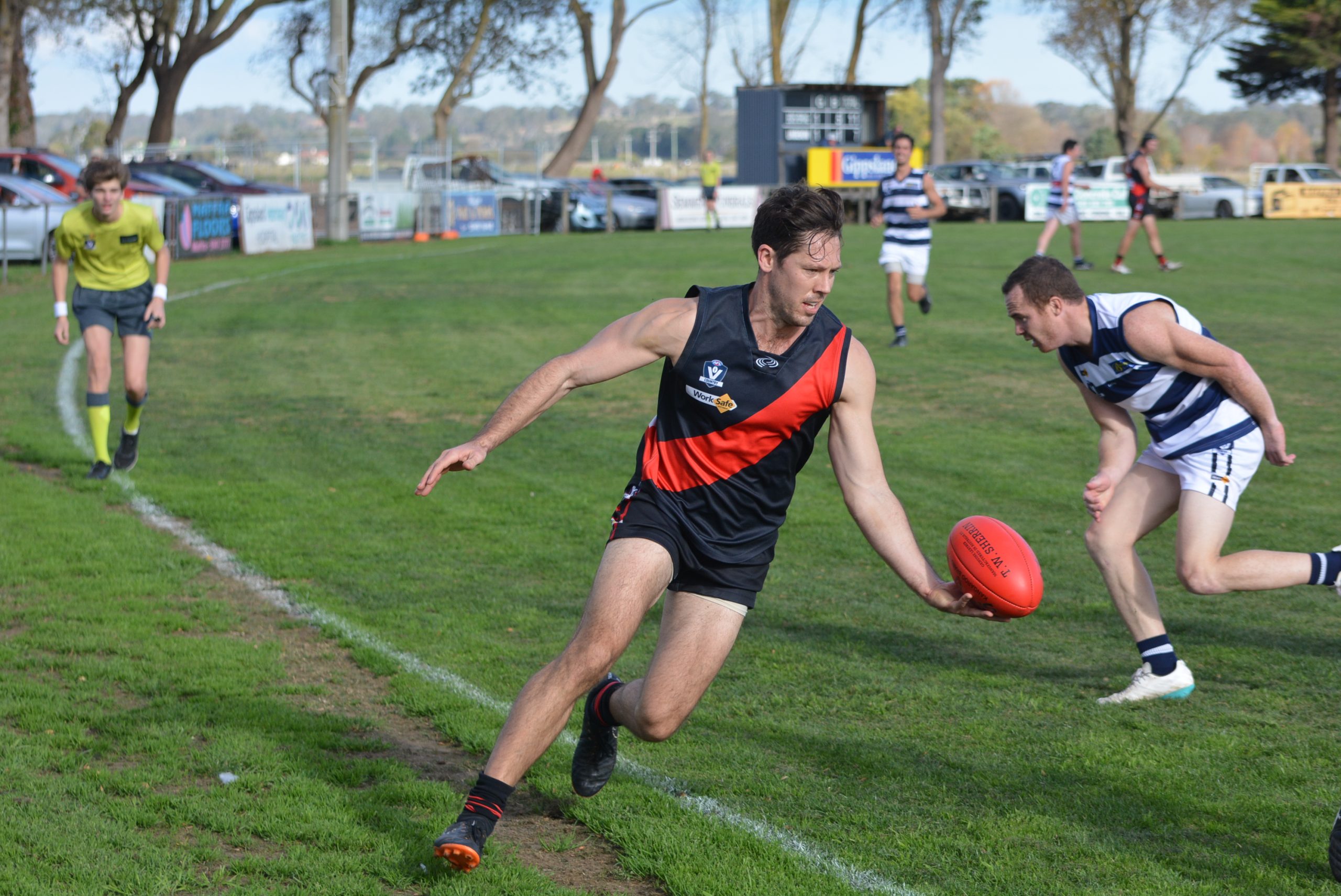 THE clash of the two undefeated teams in East Gippsland football lived up to expectation, with Boisdale-Briagolong holding off Lindenow in a thrilling match by just five points.

Not helped by a strong breeze across the ground, the Bombers almost paid the price for inaccurate kicking in front of goal, returning a score line of 7.17 (59) to the Cats’ 8.6 (54).

Honours were shared in the opening term, before a contrast of fortunes ensued in the second.

Lindenow made the most of its opportunities inside 50 to take a five-point lead at half-time as the Cats scored three goals straight during the second quarter, while Boisdale-Briagolong could only manage one major from seven scoring shots.

The Bombers hit back in the third, with a quartet of goals giving them a 16-point buffer at the final change.

The fourth quarter saw momentum ebb and flow as Boisdale-Briagolong’s forwards and midfielders were unable to convert chances. One goal, five behinds did not make for pretty reading, but it turned out to be enough to see the Bombers hold on in a pulsating finish.

Ruckman David McKean, defender Shay Ferguson and onballer Shaun Bates all performed well in the red and black. Danny Pratt and Nat Campbell kicked two goals each for the Bombers, who are now a game clear on top of the Cats on the ladder.

STRATFORD broke away from Paynesville after half-time to record a 42 point victory and post its fifth win for the season.

The Gulls made better use of the ball in front of goal in the opening term, kicking three straight, before a high scoring second quarter saw nine goals kicked between the two sides.

Whatever was said to the Stratford team at the main break obviously worked, as the Swans came out in the third term and piled on 11 scoring shots to no score. Thanks to a third quarter blitzkrieg and Cohan Lee hitting the scoreboard, Stratford finished the job and continued to make Boisdale-Briagolong and Lindenow nervous that it’s not suffering from any sort of premiership hangover.

Haydn Erfurth kicked three goals for the Swans, while Regan Tait set-up the play at the stoppages with his ruck work, and Lewis Bolton began many attacks off half-back.

LUCKNOW scored an impressive win over Lakes Entrance, with the Magpies leading at every change thanks to an impressive five-goal opening quarter.

Lakes Entrance tried valiantly to awaken from its slumber in the second quarter, and went into the main break only 19 points behind. However, a ruthless Lucknow evaporated any confidence the Seagulls may have had as it ran out for the second half, as they kicked four goals to none to put the game beyond all reasonable doubt at three-quarter-time.

WY Yung gave itself a percentage-boosting win in a one-sided match against Orbost-Snowy Rovers.

At quarter-time, the Tigers had nine goals on the board, and by half-time the margin had blown out to 106 points.

Wy Yung went about its business in a ruthless fashion, in what was another tough day for the Blues. The Tigers’ 159-point victory – 30.10 (190) to 5.1 (31) – saw them gain a significant percentage gap on teams ranked lower than them on the ladder.

James Young lead all comers in front of goal with six majors, and received good support from James Beha and Shaun Mooney who also chipped in with three. Ben Plozza and Stephen Groves put in honest displays for Orbost-Snowy Rovers, while Tyler Morrow (on permit from Moe to play alongside his brother) also played well, and kicked two goals for good measure.