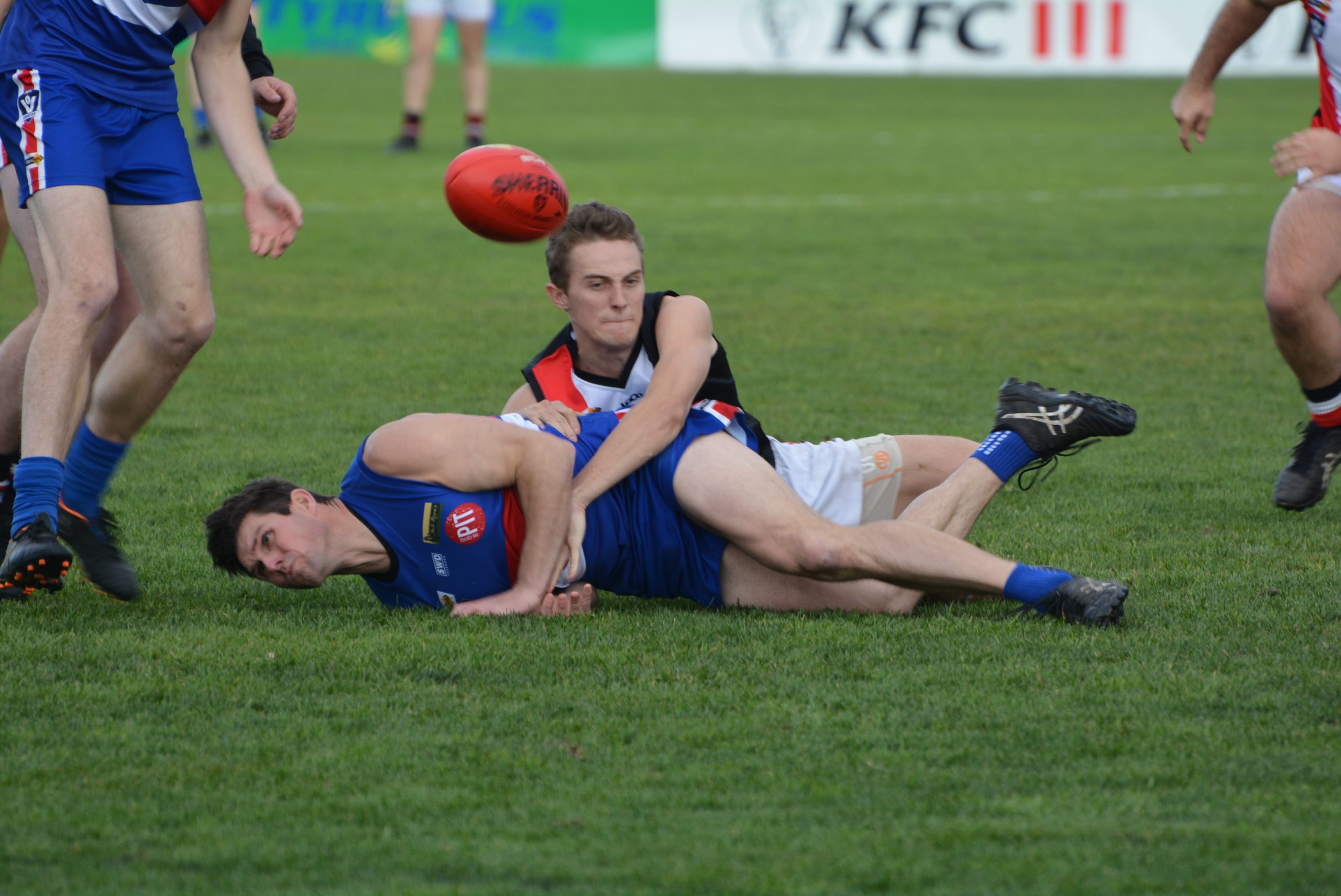 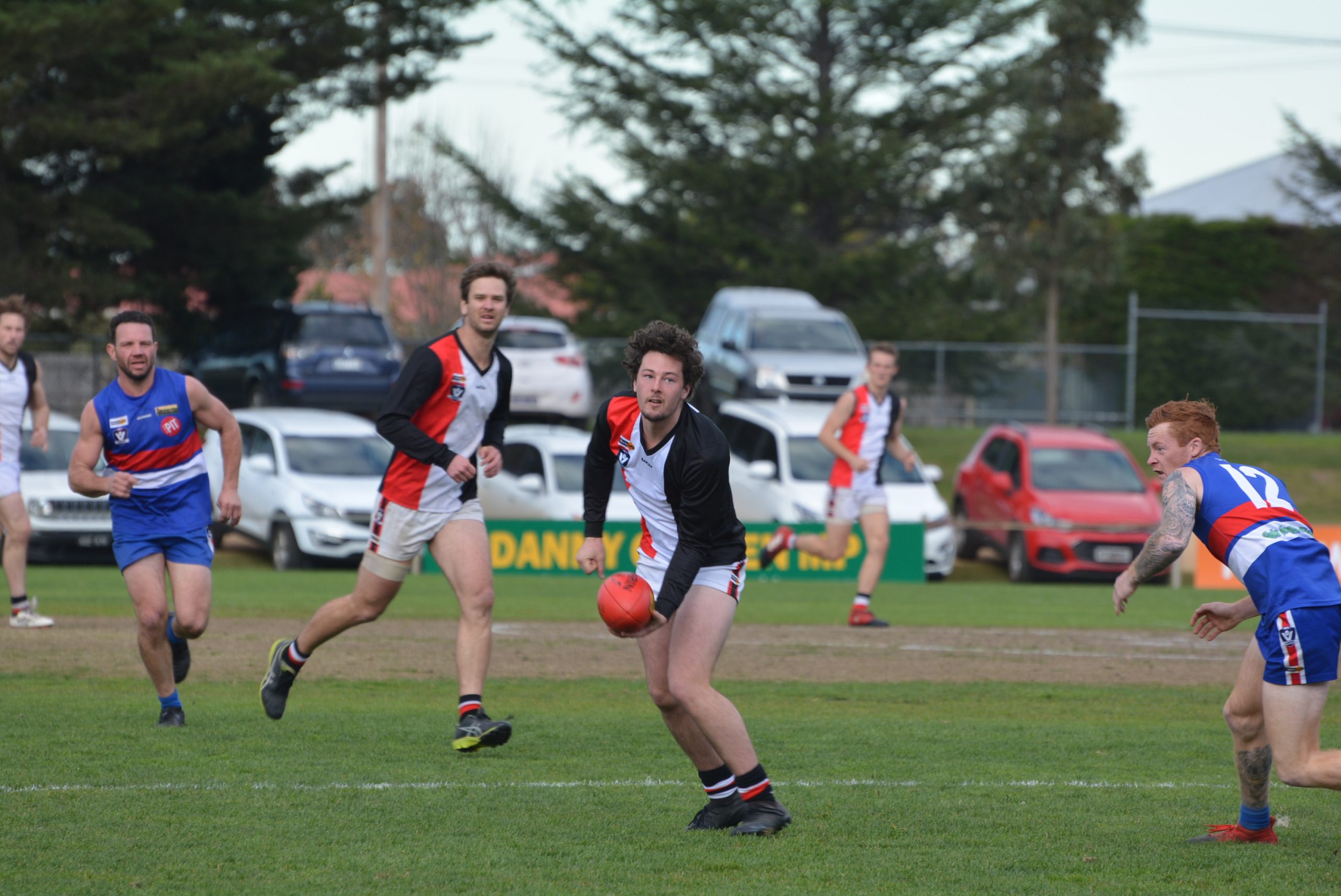 COWWARR narrowed the gap between it and the North Gippsland football top five with victory over Sale City.

The Saints won at Stephenson Park on Saturday 15.11 (101) to 11.11 (77) to move to within four points of the Bulldogs, who remain in fifth place on percentage, thanks to Traralgon-Tyers United’s big loss to Churchill.

The Saints set up their win during the first half, when they were more efficient with the ball. The visitors led by 21 points at half-time before both sides kicks six goals in the second half.

While it had plenty of the ball, City wasted opportunities to kick goals in the first quarter, as the Bulldogs took time to adjust to the breeze.

Each side kicked a goal early, before Braden Johnston kicked a goal for Cowwarr after a teammate marked an errant Bulldog kick in defence.

Riley Johnston sent the ball to Sam Moran, whose kick found Shane Morgan, who kicked the first of his four goals for the day to give the Saints back the lead.

After a couple of misses by the Bulldogs, Ben Chivers goaled to put the home side five points in front.

A 50 metre penalty helped the Saints move the ball into their forward line, before Morgan booted a goal to give them a one-point lead at quarter-time.

Bulldogs coach Jacob Schuback lamented the effort of his players, saying at quarter-time they were “lazy”, and needed to stick to their zones.

The Saints began the second quarter strongly, with Morgan winning a one-on-one contest to take a mark and kick a goal in the opening minute.

A turnover in the midfield led to Morgan kicking another goal, giving the Saints a 13-point advantage.

The Bulldogs pegged the deficit back soon after when Nick Grainger kicked a goal after marking Josh Granger’s kick.

A goal from Mathew Leicester put the Saints 14 points ahead.

The Saints finished the quarter better, adding three goals to one to take a 21-point lead into the main break.

Momentum swung the Bulldogs’ way during the third quarter, when they kicked five goals to two, cutting the Saints’ lead to five points at the final change of ends.

The Saints held off the Bulldogs’ challenge in the final term, booting four goals to one to win by 24 points.

Best-on-ground Nick Szabatura and Will Runciman were strong in defence for Cowwarr, with the midfield led by Pat Tainsh and Andrew Cunningham punishing the Bulldogs’ mistakes. James Chalmers was a danger in the forward line.

Chivers stood out for the Bulldogs, kicking two goals and working well with Brad McKay, Jacob Schuback and Jake Evans-Boulter in the midfield.

Centre half-back Josh Barton and half-back Abe Schuback also did well to get the Bulldogs back into the contest, while Kerrod Macgregor-Davies booted four goals.

HEYFIELD moved from sixth place on the ladder to fourth after a 140-point thumping of Glengarry.

Leading by 27 points at quarter-time, the visiting Kangaroos booted seven goals to one in the second term to be 64 points ahead at the main break.

Heyfield continued their dominance in the second half, adding 13 goals to one.

Matt Beddgood, Adam Wallace, Jack Woodland and James Conway controlled proceedings through the midfield, while Scott Anderson was again dominant at full back.

ON a weekend of large margins, Rosedale recorded the biggest, defeating Gormandale by 161 points.

The margin was surprising considering the Bombers went into the contest in fourth place on the ladder – they now found themselves outside the top five.

Nick Celima led the way for the Cougars, with Ben Kearns and Brendan Holt each kicking four goals and Ben Skinner three.

YARRAM was too strong for Woodside, winning by 113 points.

Underwood and Farley were particularly damaging through the midfield.