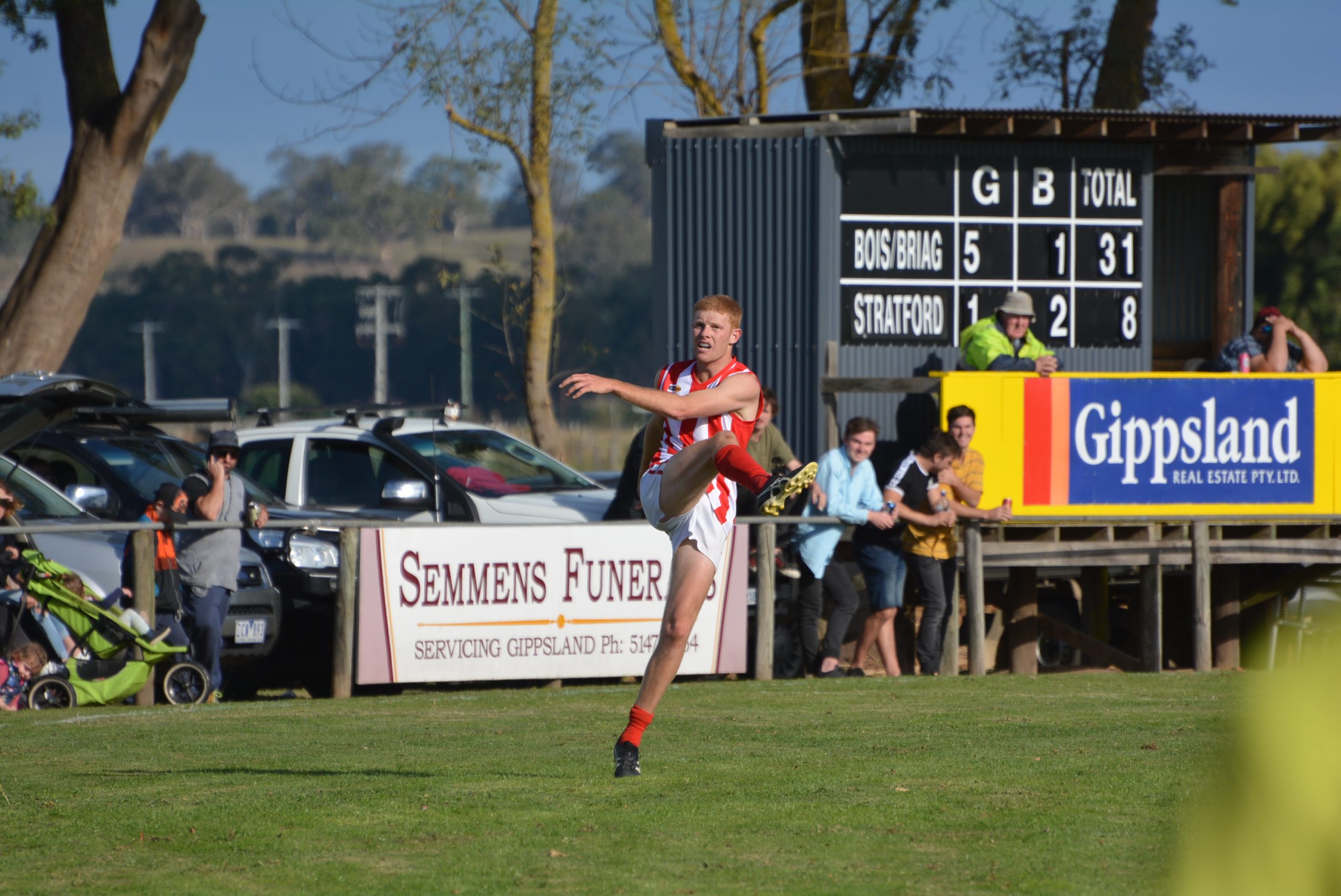 STRATFORD will look to boost its percentage when it hosts the winless Orbost-Snowy Rovers in East Gippsland football.

A mixture of luck and poor execution has seen the Swans lose their past three games, despite being in winning positions late on each occasion.

Stratford players will be hoping these close losses do not come back to hurt them at the back end of the season and will also be aiming to flip a few results the Swans’ way when they meet sides on the return.

Stratford will be approaching Saturday’s match with expectations of putting the game away early, before moving onto bigger occasions.

Despite languishing at the foot of the ladder, Orbost-Snowy Rovers has shown glimpses in the past few weeks to suggest a maiden victory may not be too far away. That being said, it will be difficult to see the Blues pipping Stratford on its home deck, although no doubt they will battle hard and put up a concerted effort to not allow the scoreboard to blow out to an embarrassing margin.

BOISDALE-BRIAGOLONG should maintain its unbeaten run when it travels to Lakes Entrance.

Having already won more matches halfway through this season than they did for the entire 2018 campaign, the Bombers look set to waltz through the month of July and prime themselves for a full assault at premiership glory.

Having missed finals last season on percentage, Boisdale-Briagolong’s aggressive off-season recruiting drive has so far looked like it will be a hard juggernaut to stop.

Internally, the club probably knows anything short of a grand final appearance will be a failure, and that thought process in itself brings with it a degree of nervous pressure.

In an interesting contrast, it was Lakes Entrance which was in the Bombers’ shoes this time last season, as the Seagulls looked to make their way to the final match of the year.

A new season has seen fortunes change for both clubs, and Boisdale-Briagolong will be looking to trust the process in Saturday’s match, bank the four points, and move on.

LUCKNOW’S chances of featuring in the finals series may hang on its clash against Lindenow.

The Magpies, currently in fifth position, are a game outside the top four, and will need to make up some ground to give themselves the best chance of qualifying.

With a position in the top two all but sown up, Lindenow will look to continue its winning form. The Cats are currently enjoying a run of four consecutive victories and are coming off the back of an impressive final term performance against Stratford last weekend.

Lucknow’s fortunes so far in 2019 have seen it defeat lower sides with relative ease, whilst it has competed strongly with the others. Eager to claim a sclp, the Magpies will take some confidence from their round nine encounter against ladder leader Boisdale-Briagolong, which saw the Magpies only go down by eight points.

While there is still a lot of football to be played, a Lucknow win tomorrow will enable it to maintain a realistic chance of taking the Magpies’ season past the home and away stages.

LIFE for Paynesville will not get much easier when it plays a rejuvenated Wy Yung.

The Gulls may still be recovering from a demoralising afternoon last weekend when it only kicked one goal in a 165-point humiliation against Boisdale-Briaglong.

The Tigers entered the top three for the first time this season thanks to a 12-goal win over Lakes Entrance, and will look to close the gap between themselves and Lindenow, currently in second position, in coming weeks.

Wy Yung has won four of its past five games, including wins over finals aspirants Stratford and Lucknow, and will approach the match with Paynesville with thoughts of decimating the Gulls’ percentage below 50.