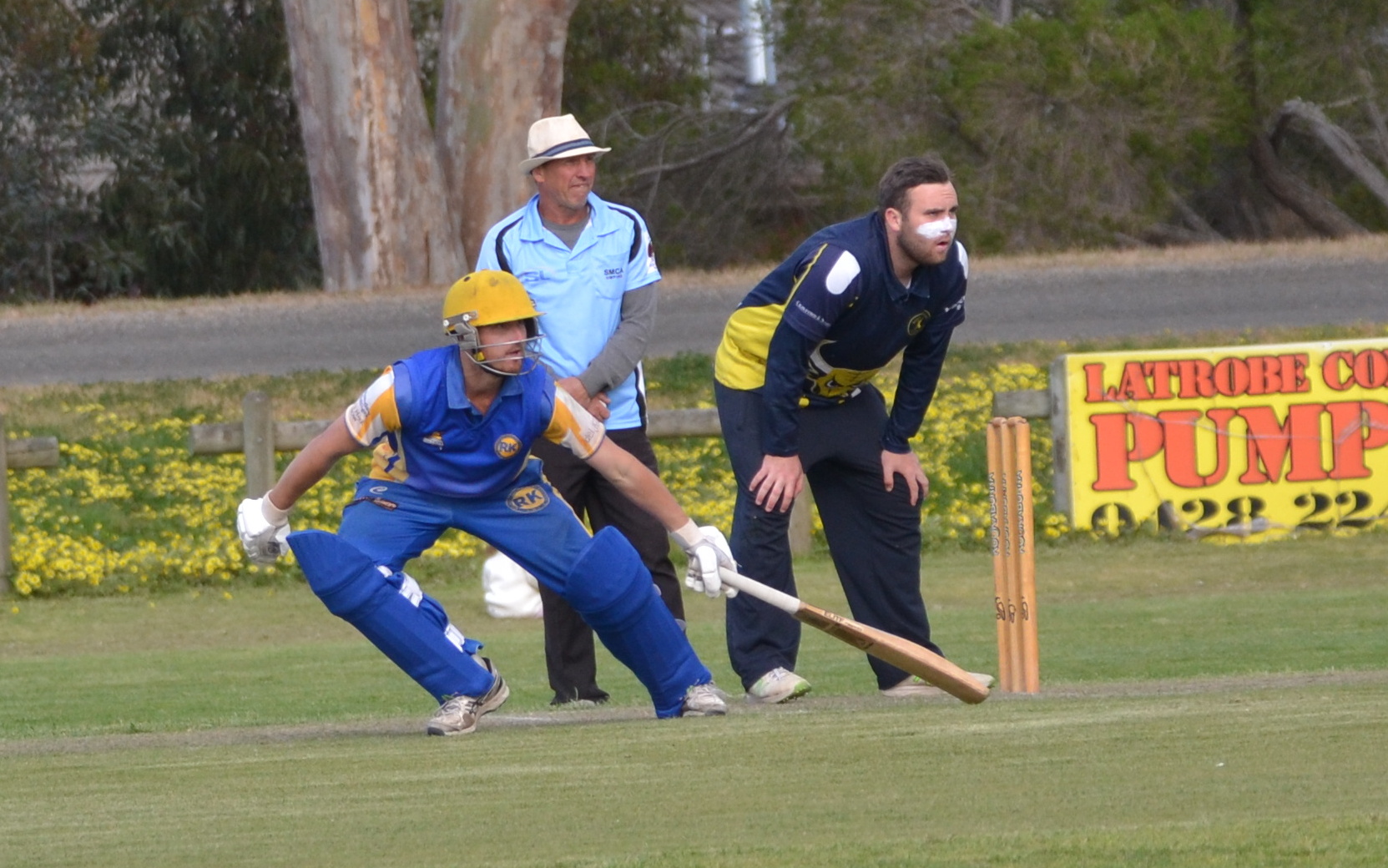 A ONE wicket win to Sale against Boisdale-Briagolong highlighted round two of Sale-Maffra Cricket Association.

The Swans got home by the skin of their teeth, as the last wicket pair of Lachlan Carman and Matt Raidal held their nerve to scratch out the required runs.

A five wicket haul to Boisdale-Briagolong bowler Jonathan Beech ended up being in vain, as the Saints were brave defending a modest first innings total of 134.

Upon winning the toss, the Saints put together a scorecard that had no major contributions.

A lack of sizable partnerships was telling, as only Beech with 25 and Liam Hurst with 29 were able to make an impression.

After sitting relatively comfortably at 3-68, Boisdale-Briagolong collapsed and lost 3-6 and looked set to be dismissed cheaply.

Some counter-attacking down the order from Todd Mann and Steve Noble pushed the score above three figures, while Hurst did his best to farm most of the strike to ensure the side posted a competitive total.

Sale import Coenie Nel was the best performed bowler, finishing with figures of 3-20, whilst Brad Jones collected 2-31, including the key wickets of Hurst and Boisdale-Briagolong captain Toby Leeds, who scored 19.

In reply, the Swans tried hard to lose the game, and almost made an absolute meal out of chasing the Saints’ target.

Sale captain Rohan Blandford did the bulk of the work at the top of the order, scoring a run-a-ball 28.

When Blandford was dismissed, the entire Sale score was 32, meaning 88 per cent of the Swans’ runs in the first few overs had come from Blandford’s bat.

Boisdale-Briagolong bowler Louis Howard claimed Blandford’s opening partner John Mayman for a golden duck, and when Tim Dessent got an edge on one off Hurst that went through to Jonathon Outhard a short time later, it was game on.

With the Swans 3-43, Nel and Nathan Massey set about consolidating the innings.

Massey got himself to 18 before being trapped in front by Beech, which set about a mini-collapse from Sale as Joe Boyle, Simon Jago and Jones all went cheaply.

As Sale slumped to 7-105, the 30 needed to win would have felt like 300. Things only got worse for the Swans, as Nel became another one of Beech’s victims when he departed for 43.

Beech then got Daniel Croft moments later, to see the scoreboard read 9-122.

Needing 13 to win with one wicket in hand, tail enders Matt Raidal and Lachlan Carman made a name for themselves, eventually securing the winning runs and sending a collective sigh of relief through the Sale camp.

Beech finished with figures of 5-26 from eight overs.

AN all-round team effort from Rosedale-Kilmany saw it defeat Bundalaguah, in a good confidence booster for the Warriors.

The Bulls were sent in and found themselves unable to press home an advantage.

Opening batsman Jason Langshaw batted for two hours during his knock of 67, but was bereft of any support, as the next highest score was 18.

The Rosedale-Kilmay players were sent into uncontrolled jubilation when captain Hayden Glover knocked over key Bundalaguah player Steve Spoljaric for a duck, which set the tone for a disciplined bowling display by the Warriors.

The Bulls closed after their allotted overs with 150 on the board, which they probably would have taken considering the lack of output from many in the top six.

The Warriors then chased the required runs with nine overs to spare, as all batsman did their share of the heavy lifting. Rohan Diamond made 32 from 34 balls, and Cameron Freshwater remained unbeaten on 41. Glover hit the winning runs, with a club over midwicket.

COLLEGIANS won a high scoring match against Maffra, in the second consecutive week Collegians posted a first innings total over 250.

Away from the result, the game carried with it two separate heartaches, as players from both sides narrowly missed scoring their maiden SMCA first grade centuries.

Collegians opener Zac Hurley fell two runs short, whilst the Eagles’ Jack Egan was left stranded on 95 not out.

Batting first, Collegians players sent the ball to all parts of the ground, with Hurley combining with Jack Tatterson who scored 30, and first drop Adrian Burgiel who made a half century. Isaac Love also got amongst the runs again, to remain not out on 61.

With the scoring rate threatening to get out of control, the Maffra bowlers were forced to stem the bleeding. Josh Davis, although wicket-less, returned respectable figures given the circumstances, while opening bowler Nathan Magnuson did his best with 2-65.

The Eagles ended up making a good fist of the chase, but a poor start saw them stumble to 4-67 – meaning they were always paddling against the current.

With the game looking like it was a foregone conclusion, Egan decided there was nothing to lose and proceeded to whack 11 boundaries in his knock.

He combined with Jackson Scott (34) as the pair put on 91 for the fifth wicket. Maffra eventually closed at 6-202 in what acted as something of a platform game on which to build from.

STRATFORD made light work of Longford, with the Redbacks able to enjoy an early beer after wrapping the game up with minimal fuss.

In possibly the worst timing imaginable, Kerrod Macgreogor-Davies, who transferred from Stratford to Longford last week, found himself playing against the team he had played for in the previous round.

The Lizards elected to bat first but were unable to do anything spectacular, and were bowled out for just 76.

Longford was without Richard Bell, who started the season with a fine 82 against Collegians last week, and his absence was evident as the Lizards failed to build any partnerships.

Taylor Tatterson retuned figures of 3-3 for the Redbacks, as wickets fell at regular intervals.

Stratford got the required runs in the 16th over, with the only annoying part being the fact that a wicket fell when the scores were level, meaning Jack Wrigglesworth had to get fully kitted up to score one run.

Redback openers Lewis Bolton (39) and Cormac Hassett (34) got the job done for their team.