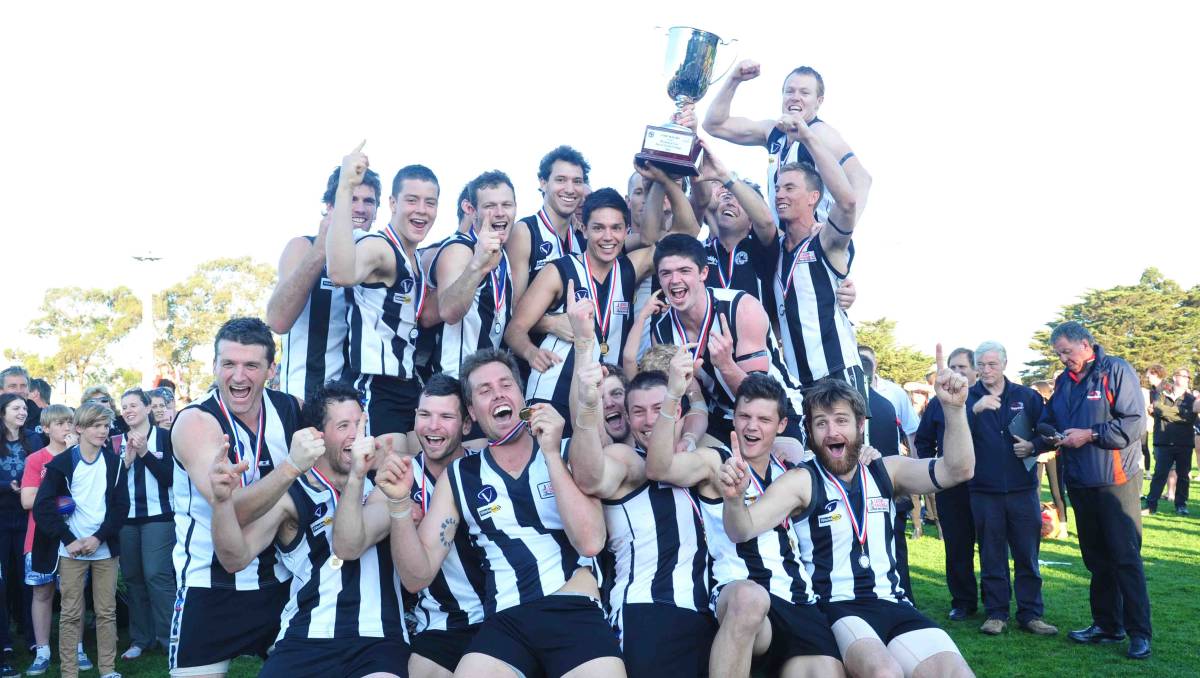 SEVEN out of 10 Gippsland League teams featured in at least one grand final in the past decade, with a number of memorable contests living on in the memory of players, coaches and spectators.

For the most part, attendees have got their money’s worth on grand final day in the past 10 years, with only two genuine blow-outs occurring.

The past three years have been a particular highlight, and have all been decided by single figure margins.

The decade began and finished with Maffra adding to its enviable tally of senior titles, while also claiming another one in the middle for good measure.

Sale won one and was one of the benchmark teams for a long period, and neighbouring rivals Traralgon and Morwell each took home a pair of cups each.

The Tigers claimed back-to-back flags, as did Leongatha, who will be looking to extend its run of five successive grand finals when or if football returns in 2020.

The 2010s wasn’t all about the premiership winning teams. There was also some good stories to come out of Drouin, who featured in consecutive grand finals, and like St Kilda in 2009 and 2010, were probably stiff not to win at least one. And then there was Wonthaggi, who made its first Gippsland League grand final with a team of genuine role players.

Here, we begin our look at the Gippsland League grand finals from the 2010s.

THE 2010 grand final was always going to be a hard act to follow given what had taken place the year before, when Maffra’s Nick Horsford lived every boys’ dream by kicking a goal after the siren to see the Eagles to their most famous victory.

There was no premiership hangover for the Eagles, who finished the 2010 season three wins clear on top of the ladder.

Their grand final opponent Drouin took the long road to the decider, coming from fourth position. The Hawks enjoyed a barnstorming run into the big dance, winning nine of their previous 10 games, including a six-goal final quarter effort to get over Traralgon in the preliminary final.

Just two points separated the teams at the main break, with Maffra 11 points ahead at the final change of ends. The Eagles did enough in the final quarter to win by 18 points and make it back-to-back flags.

The Drouin team that day featured Chris Dunne and Pat McGrath, two players who would go on to win back-to-back titles for Leongatha against Maffra a few years later.

DROUIN enjoyed another solid home-and-away season in 2011, finishing second on the ladder below Traralgon, who claimed the minor premiership by one win.

Incidentally, both teams recorded draws throughout the season, although not against each other.

The second semi-final gave a good indication of how even the Hawks and Maroons were, with Traralgon getting up by 17 points. Drouin came back a fortnight later after defeating Maffra in the preliminary final for another crack at Traralgon to make it successive grand final appearances.

Scores were deadlocked at the main break, before Traralgon kicked seven goals to four in the third quarter to take a handy 16-point lead heading into the fourth. The margin proved to be enough, with the Maroons eventually winning by 14 points – not too dissimilar to the result in the second semi-final.

Traralgon forward Dan McKenna was the clear best afield and virtually single-handedly denied Drouin, kicking eight goals. McKenna had a good apprentice that day in a young Tim Membrey, while on the Drouin side, another future AFL player by the name of Anthony McDonald-Tipungwuti kicked three goals.

Traralgon midfielder Haydn Hector, who broke the AFL draft combine beep test record the previous year with a score of 15.7, also played, although it was the only match he played all season. One has to feel sorry for the poor bloke who missed out.

This 2011 season signalled the end of an era for Drouin, who suffered a dramatic fall from grace in the years to follow, with its finishes in the next three seasons being seventh, ninth and 10th.

SALE laid claim to cementing its place as one of the greatest teams in Gippsland League history after it virtually crucified every opponent it came up against in 2012.

The Magpies finished the regular season two wins clear on top of the ladder, with a whopping percentage of 265. Some mind-blowing statistics from that season saw Sale’s average winning margin sit at close to 80 points, while the average opposition score against the Magpies was only around 36 points.

The week-to-week annihilations Sale handed out to its opponents returned four triple-figure victories, including a 176-point win over Bairnsdale, as all-in-all the Magpies kicked 212 more goals than their opponents After dropping a game in round six, Sale went on a 14-game winning streak and was rarely challenged – it’s closest win after round six was 36 points.

Perhaps the two most telling statistics from that season are that Sale kept Leongatha, the team which finished the regular season in second position on the ladder, goal-less for an entire game, and beat grand final opponent Maffra by margins of 60, 79, 38 and 56 points.

The Magpies’ full ground press initially caught every other team off guard, as Sale rolled over its opponents with a high octane style that created incredible levels of pressure.

On-lookers were left stunned and amazed at its effectiveness and by the second half of the season, bedazzled opposition coaches were scratching their head to try and conjure up a way to counteract it. In the end, not only could teams not beat Sale, they couldn’t stop them.

The grand final followed a similar script to what had happened all season, with Sale leading at every change to win by 56 points.

Among the best players in the black and white that day were future club leaders Shane Fyfe and Jordan Dessent, as well as Ferguson who kicked five goals.

A very young Josh Dunkley also played. Remarkably, Dunkley was a bottom aged under 16 player at the time.

HISTORY appeared certain to repeat in 2013, after Sale completed another dominant home-and-away season. The Magpies again finished on top of the ladder, with a percentage of more than 200.

Sale ended up three wins clear of its nearest rival, an improvement from the previous season, and also won five games by more than 100 points – also more than it managed the previous year.

One of those 100-point wins came the week before finals began and against eventual grand final opponent Morwell.

Despite finishing second, Morwell proved a hard team to get a gauge on during the home-and-away season, as it won six games by 20 points or less and lost to sixth-placed Bairnsdale, to go with the 122-point loss at Sale.

The Tigers lost the qualifying final to Maffra, but defeated the Eagles a fortnight later in the preliminary final to book a date with Sale.

Sale entered the grand final with 32 consecutive wins under its belt. Morwell was given little chance, but a muddied Ted Summerton Reserve made for a different outlook for the grand final, which was played on a Sunday.

Under first year player-coach Harmit Singh, legend has it former Collingwood and then Morwell player Tarkyn Lockyer showed the team vision of how Collingwood set up for kick-ins and looked to replicate its style. Whatever instructions were given clearly did not fall on deaf ears, as David defeated Goliath by 81 points.

During the second quarter, the Tigers kicked seven goals to none and had the scoreboard reading 12.6 (78) to 1.3 (9) at half-time.

Disbelieving spectators were left to rub their eyes to make sure what they were witnessing wasn’t a dream, and it’s likely a few Morwell players and staff members were forced to do the same thing.

The man who would go on to coach Morwell a couple of years later, Joel Soutar, kicked four goals in a best-onground display, while Lockyer was also busy. Young guns Boyd Bailey (three goals) and Ryan Tatterson were also prominent.

IT is not often the preliminary final is remembered more than the grand final, but that was the case in 2014, after Wonthaggi stormed into its first Gippsland League decider with a come-from-nowhere victory the week prior.

In one of the greatest games ever in Gippsland League history, the Power overcame a 45-point deficit at three-quarter-time of the preliminary final to defeat Sale by three.

For the third year in a row, Sale finished the regular season with a percentage of more than 200, although this time, it had to be content with finishing equal-first on the ladder after Morwell marginally piped it.

The two teams that had played in the previous year’s grand final were again the pace setters in 2014, each winning 16 games and trading a win and a loss against each other.

The Power had spent 18 months quietly going about its business and by 2014 was nipping at the heels of Morwell and Sale.

Wonthaggi’s rise as a strong football club coincided with the opening of the local desalination plant, which was in full swing by 2012 and attracted people to the coast.

Under second year coach Rob Railton, Wonthaggi’s dour, ultra defensive style proved difficult to score against. While not necessarily loaded with top end talent, Wonthaggi played a system which worked for it.

The Power only scored an average of nine goals per game against the top five sides, but this did not matter as it also conceded the least amount of points of any team in 2014.

The grand final proved to be a bridge too far for the Power, who went down in the premiership decider by three goals.

Tim Ryan and Ash Close were adjudged best players for Morwell, while Tarkyn Lockyer kicked three goals in another sound game on the biggest stage.

In the eyes of many, Wonthaggi played its grand final the week before, and it was clear some players were emotionally exhausted from what had taken place in the lead up.

In part two: Maffra and Leongatha dominate the second half of the decade.