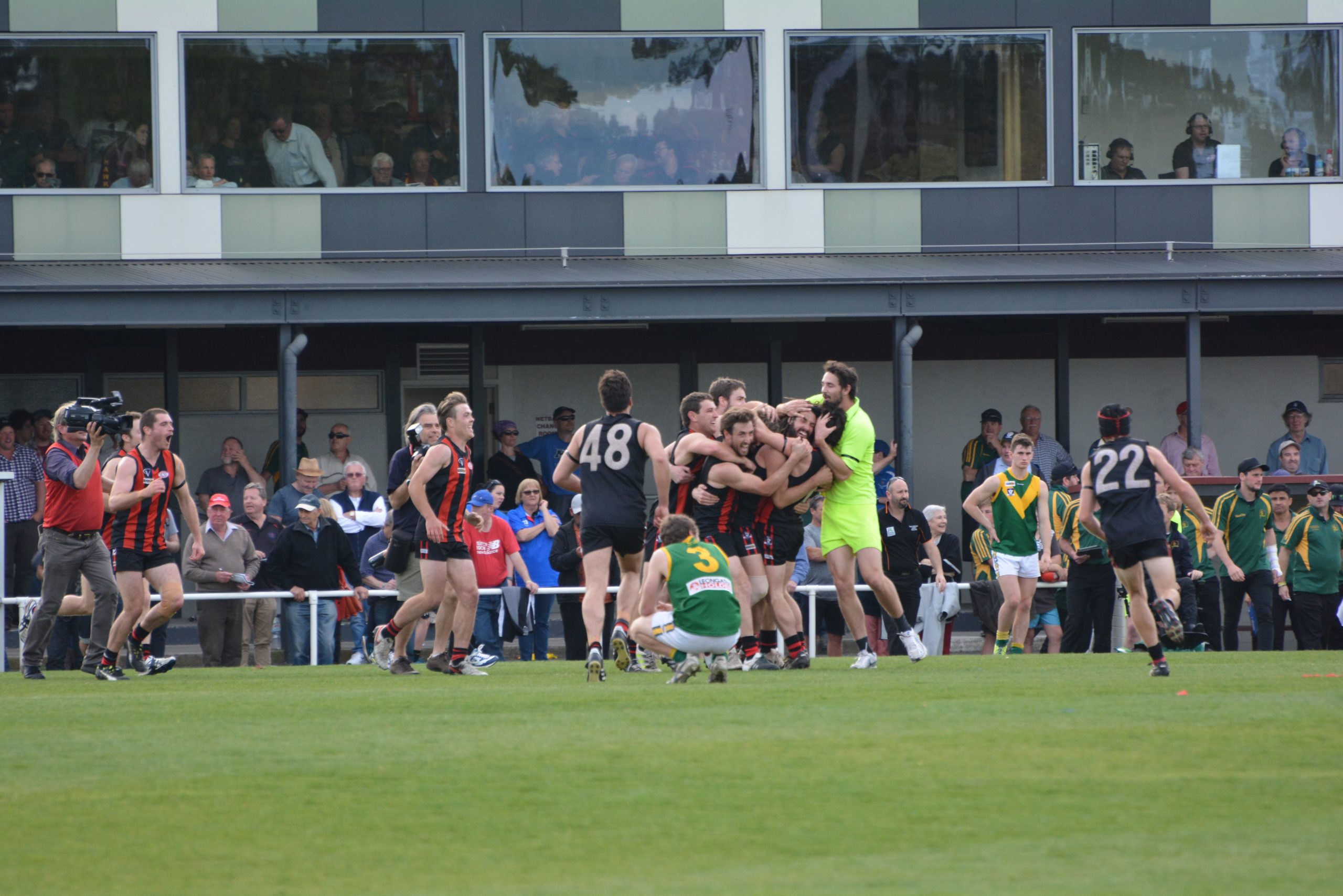 SEVEN out of 10 Gippsland League teams featured in at least one grand final in the past decade, with a number of memorable contests living on in the memory of players, coaches and spectators.

For the most part, attendees received their money’s worth on grand final day in the past 10 years, with only two genuine blow-outs occurring.

Last week, we looked at the first five grand finals of the decade. In part two, we close out the 2010s.

THE two teams which missed finals the previous season ended up in the grand final in 2015.

Beau Vernon returned to Leongatha to take up the senior coaching role, and made an immediate impact, propelling the Parrots from seventh to first in 12 months.

The Maroons also enjoyed a rise up the ladder, going from sixth to third.

Traralgon and Leongatha faced each other in the final round of the regular season in 2014, and in 2015, also ended their seasons by playing each other.

Things got off to a less than ideal start for Traralgon, which was inflicted with a 123-point shellacking at the hands of Leongatha in the opening round.

Sitting in a precarious position with six wins and four losses following a defeat to Leongatha on the return fixture, the Maroons decided enough was enough. From there, Traralgon put the foot down and went on an eight-game winning streak, which it carried into the finals.

The Maroons defeated Leongatha for the first time all season in the second semi-final to earn their ticket to the big dance.

Traralgon maintained its form in the decider, kicking the first five goals of the game, of which Leongatha didn’t recover from. That five goal head start ended up being the winning margin.

A METHODICAL Maffra cunningly put everything together at the business end of the season in 2016, en-route to winning its second premiership of the decade.

The Eagles finished the regular season in second position, five wins and some distance behind Leongatha.

The minor premier appeared on track to make up for a runner-up placing the year before, going through the home-and-away season undefeated.

Heavy rain denied Leongatha a clean 18-win zero-loss record, after the round 12 match against Maffra was called off because the Maffra Recreation Reserve was under water.

After the abandoned game, Maffra’s run to the finals was not exactly smooth sailing, as the team went loss, win, win, loss, win, loss. A final round loss to Warragul at Western Park enabled Warragul to make finals.

In what was one of the feel-good stories of the year, the Gulls needed to win their final two games against Traralgon and Maffra to get in.

With favourite son Leigh Sheehan coming out of retirement, the Gulls defeated Traralgon by three points, and then Maffra by 13.

Maffra raised a few eyebrows by resting key players Kelvin Porter, Sam Pleming and David Adams for the final game of the home-and-away season, with the trio then all coming straight back into the team for the qualifying final a week later.

The Eagles defeated Traralgon in the qualifying final, before inflicting Leongatha with its first loss of the year in the semi-final to advance to the decider.

The grand final saw a repeat result, with Maffra kicking five goals to three in the last quarter to win by 21 points.

Porter and fellow midfielder Danny Butcher were the two stand-outs, while former AFL ruckman Trent Knobel provided them with first use.

THE second of what would turn out to be four consecutive Leongatha-Maffra grand finals returned just the third one-point margin in Gippsland League grand final history, and the closest since 1973.

Again the two stand-out teams in the competition, the Parrots and Eagles did not play each other in September until the grand final after Traralgon rolled Maffra in the qualifying final, while Leongatha went straight through after winning the semi.

In what was probably the best grand final of the decade, a 10-goal opening quarter saw the Parrots take a four-goal lead into the first break before Maffra made use of the scoring end in the second term to slam through five goals of its own.

The Eagles held a two-point lead at three-quarter-time, but Leongatha was able to hold on for dear life and have its nose in front by the barest margin at the final siren.

It was a day for key forwards as Leongatha’s Chris Dunne slotted through six, including the winner, in a best-on-ground display, while at the other end, Maffra monster Darren Sheen had to be content with five.

Having lost only seven games in the previous two seasons – four of which were finals – the win was utter relief for Leongatha.

The win also capped off a triumphant return for coach Beau Vernon, who became a quadriplegic just five years earlier while playing for Leongatha.

Vernon’s premiership medal and the Leongatha jumper he was wearing at the time of the incident has since been put on display in the National Sports Museum at the MCG.

MAFFRA and Leongatha again finished the regular season occupying places one and two on the ladder, and again faced off in the grand final.

Only percentage separated the teams as the ladder was finalised, with the Eagles taking out the minor premiership.

Round 16 proved to be an interesting day for both clubs, as Leongatha lost at home to lowly Drouin and Maffra again lost at Warragul for the third season in a row.

Despite these late season hiccups, the Parrots and Eagles showed how it’s done during September and played out another tight grand final.

Just five points separated the teams at quarter-time and half-time, with Maffra leading at the first change and Leongatha taking honours at the main break.

Scores were then all tied up at three-quarter-time at 51 a-piece, although Leongatha had registered 7.9 to Maffra’s 8.3.

Cade Maskell with five goals for the victors was enormous, as was veteran Col Sanbrook who provided plenty of dash and carry.

Having also won the reserves premiership that season, one can only imagine the party over the Leongatha hills in the days after.

ANTOHER epic Maffra-Leongatha grand final was played out in 2019.

Season 2019 saw statistically one of the most even competitions in Gippsland League history, with the team which finished last only missing a finals spot by three games, and only one win separating first from fourth.

There was added incentive to claim the minor premiership in 2019, with hosting rights to the second semi-final up for grabs.

Maffra finished on top for the second consecutive year, and went straight through to the grand final after defeating Leongatha in the semi. The Parrots set up a rematch a fortnight later, and very nearly made it a hat-trick of titles.

In a seesawing contest, the lead changed four times in the final quarter, with Maffra this time coming out on top, hanging on by eight points – one less than Leongatha did the previous season.

The decade closed the way it had opened, with a Maffra premiership, and also squared the ledger in Maffra-Leongatha grand finals at two-all.