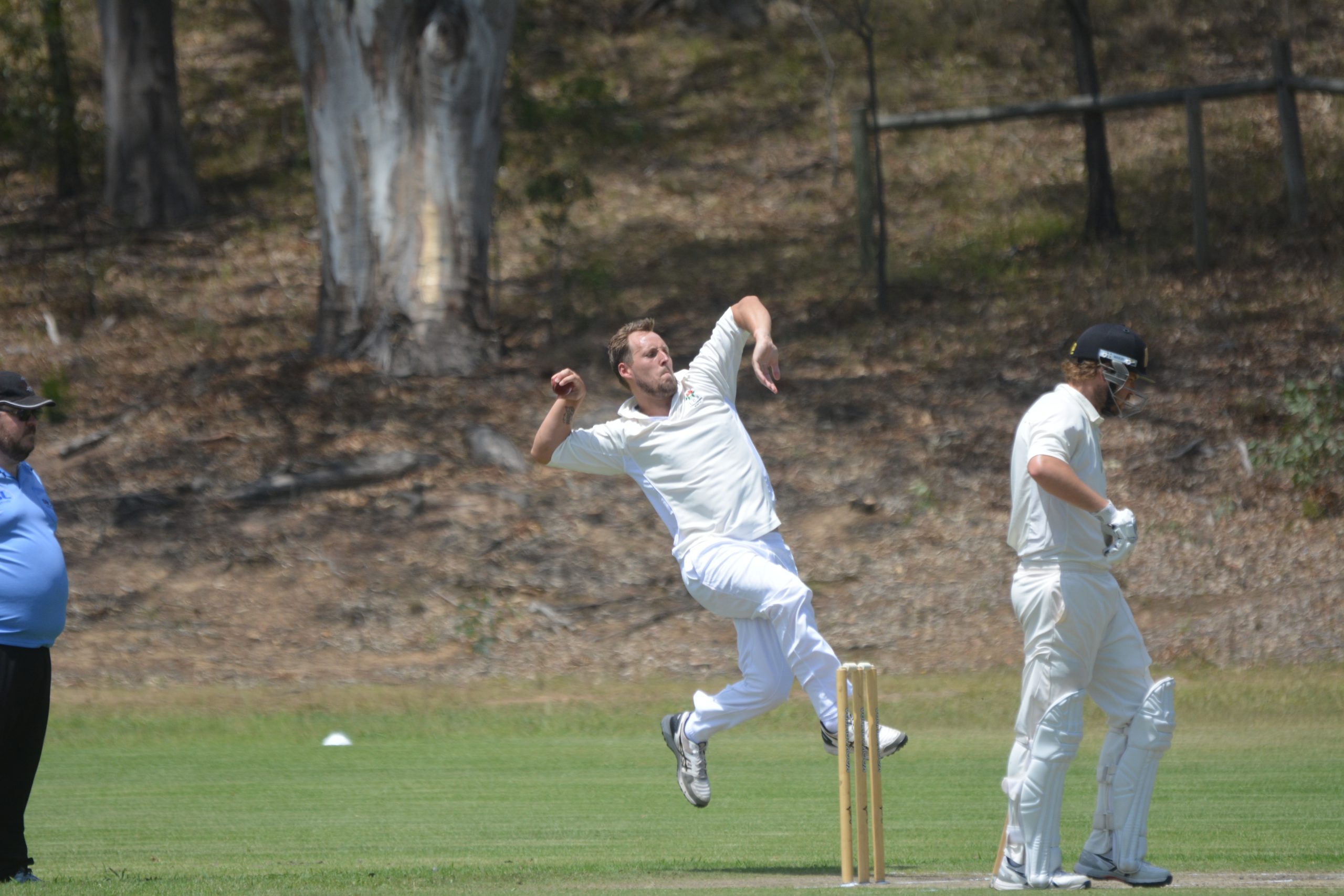 IN this day and age of over-analysis and sports science, Boisdale-Briagolong opening bowler Todd Mann might just be the epitome of the phrase ‘do whatever works for you’.

In a career spanning a number of years, Mann’s homegrown bowling style has seen him terrorise a number of batsman across Gippsland.

The self-taught pace bowler has well and truly made a mockery of everything a traditionalist would normally associate with a typical fast bowler.

Mann does not have a long run up, a clean gather or even a highly economical action – what he does have however, is more than 400 first grade wickets.

With a style that defies the textbook, Mann measures 10 paces after giving his hat to the umpire and then turns at the top of his mark.

Preparing to bowl, he then walks the first four steps of those 10 paces and runs the final six until reaching the crease.

From there, his menacing eyes stare down the 22 yard strip as he offers the ball up, almost as a warning to the batsman should they wish to run away, before appearing to untangle his arms from the discombobulated contortion they create at the point of delivery.

Once the ball is propelled from a reasonably high point it races down the track, extracting a good deal of sharp bounce that will often have batsman thinking the ball ‘got onto me a lot quicker than I expected’.

In terms of pace, Mann would probably be pushing the 120 kilometre an hour barrier. And his short run up enables him to bowl 20-over spells without much strain.

“I don’t get tired, it’s all shoulders,” Mann explained.

“I’d rather bowl 20 overs in a row. If I can have the ball in my hand it’s good, I don’t like to give the ball to anyone else.

“The arms going everywhere has always been there. I don’t know I’m doing it. I’ve seen a couple of videos and it’s not normal.

“A few people have tried to correct my bowling action and run up but it just doesn’t feel comfortable.”

While the action isn’t exactly of former South African test spinner Paul Adams ‘frog-in-a-blender’ notoriety, there have been many international cricketers who have found success doing things their own way.

West Indies legend Shivnarine Chanderpaul averaged more than 50 in test cricket with his trademark ‘crab-like’ stance’, while Sri Lankan Lasith Malinga has made a career out of bowling at the death in limited overs cricket with his round-arm ‘slinger’ action able to deliver searing yorkers. Australia’s best current batsman also has his own unique style. It’s unlikely any coach would have taught Steve Smith to do a 180 degree jump after leaving the ball, and it’s equally unlikely anyone thought he would be compared to Don Bradman after coming into the test team as a leg spinner who batted at eight.

Speaking of Bradman, a quick Google image search of ‘Don Bradman batting grip’ may prove surprising to those who have not seen it on close inspection.

Like Mann, two of the fastest bowlers in world cricket today hardly have a run up. India’s Jasprit Bumrah essentially catapults the ball after shuffling a few paces, and England’s Jofra Archer proved too quick for even Smith to handle in the last Ashes series.

Success has come for Mann at both club and individual level, and he has been part of three first grade premiership teams across Gippsland.

“At Traf I was only 17 when we won it and didn’t appreciate it at the time, I thought it was just going to happen the following year,” Mann said.

“We played Drouin and basically beat them in the first day.

“It was a low-scoring game, we made about 130 and had them eight down for 50-odd overnight and only two of their blokes brought their gear the next day and within the first 15 overs we took the two wickets.

“The Yarragon one was huge, the whole town was there.

“We played at Western Park and after the celebrations we drove into the gate at Yarragon and no word of a lie the whole town was there just bowing to us. It was unbelievable scenes.”

After a few seasons at Rovers in the Traralgon and District league, Mann explained his move to Boisdale-Briagolong came about from virtually a chance meeting.

“I knew a bloke called Jon Outhard, JJ, he came out and played a few games with me for Bruthen (Football-Netball Club) in 2018 and he said ‘well if I’m coming out to play a few games reckon you’d come out to Briag?’ he said.

“I’d never heard of Briag before and went out there and JJ was doing the wicket.

“I introduced myself and all that stuff and ended up having a fabulous first season, who would have thought.”

In that first season the Saints went from secondlast on the ladder at Christmas to eventfully win the premiership.

As well as premierships, Mann has also achievedthe rare feat of being inducted as a Legend of Gippsland Cricket. To be inducted as a legend one must gain selection in four All-Gippsland XIs.

The All-Gippsland XI is selected from the top performers in Gippsland Cricket League representative matches.

The father of three was inducted in 2015-16 and said it was surprising to hear his name listed among some of the great local players.

“I can look back in a few years time when I finish cricket and tell stories to my kids that dad was a Champion of Gippsland Cricket so I’m honoured.”

When asked who were some of the best he had played with and against, Mann said a few players stood out.

“I’ve played with some great cricketers,” he said.

“One of the best innings I’ve seen is Gamini Kumara’s 187 not out in a semi-final for Yarragon.

“I was captain-coach and decided to bowl first against Bunyip because the wicket was green.

“We had them 2-0. Tom Papley, who now plays for Sydney, played for Bunyip and he was a gun at cricket.

“Bunyip had everyone on the boundary except the wicket-keeper and the bowler and Gama was still hitting sixes and fours. It was one of the best knocks I’ve ever seen.

“Gama will go down in history as probably the greatest cricketer Yarragon’s ever had.”

Mann labelled two other Yarragon players up there with the best in Daniel Hamilton and John Allsop.

The man known as ‘Mantis’ has built a reputation in local cricket for his extraordinary hitting ability.

At first glance one would not suspect someone who walks to the wicket with crooked glasses and worn out pads and gloves to be much threat, but Mann said when it came to ‘looks can be deceiving’, Allsop fitted the bill.

“There’s a story of Mantis playing a country week game at Punt Road and Mantis hit a six into the Jack Dyer Stand and there’s a mark, still to this day, where the ball landed.”

Another player to rate a mention is current Boisale-Briagolong captain Toby Leeds.

“He’s a very unorthodox player. His stance for starters is one of the weirdest stances I’ve ever seen. His legs are spread like he’s doing the splits but he just watches the ball that well from ball one.

“He just picks it up and makes it look so easy. For a bloke who bats like that. I don’t think he has a weakness and I don’t say that about many batsman. He probably gets himself out.”

A number of opponents Mann has come up against over the years have also made for good tussles.

“Probably Matty Dowsett and a bloke called Dale Serong from Longwarry are the two best batsman I’ve bowled to,” he said.

“They just come out from ball one and try and take any bowling attack on.

“There was also a bloke called James McMahon from Hallora back in the day he was a very handy cricketer.”

Mann also pointed to a few Traralgon-based players in the top echelon.

“Lee Stockdale is a freak and I rate Jordy Gilmore as one of the best players in Gippsland,” he said.

“A bloke called Greg Munro people forget when he played for Ex Students, you couldn’t get him out, and Shaun Barbour from Gormandale, he’s done everything in cricket.”

Despite the credentials of the above mentioned players, Mann ranked Trafalgar’s Rhys Holdsworth at the top of the list.

Holdsworth still holds the record for the highest score in Warragul and District cricket, after managing a scarcely believable double century in A grade as a 16-year-old.

Mann had the best seat in the house to the innings, as he was at the other end as the pair put on 241 for the sixth wicket.

“I still think Rhys is the best cricketer I’ve played with,” he said.

With a decent cricket resume himself, Mann believed the effectiveness of his bowling laid in the simplicity of just enjoying the game.

“If you get hit for six so be it, get hit for four, who cares. At the end of the day it’s not life and death. Cricket’s a game.

“We’re not professional cricketers down here by any chance but if you want to be successful, you train hard, you play hard, simple as that.”

With a unique bowling action that has servedhim well to date, Mann said an adherence to the KISS principle of ‘Keep It Simple Stupid’ was a good base to work from.

“Just go in and have fun, don’t overcomplicate cricket because cricket’s not a complicated game.

“It’s like playing tennis, hit the ball over a net, that’s how I see it, cricket’s no different.

“Run in with a smile and enjoy your cricket.”