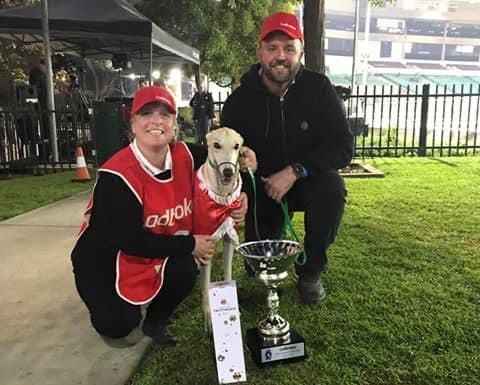 A $12 chance at the tote, Playlist began well out of box one to win the 520 metre race at Sydney’s Wentworth Park in 29.96 seconds, three and three-quarter lengths clear of favourite Tommy Shelby.

Clark and wife Bianca had a lot to endure just to be in Sydney.

With rumblings of a border shutdown, New South Wales stewards advised Clark before the heats to make the journey north as soon as possible.

With his dogs not settling in their first night at the Potts Park track, Clark slept beside them on a stretcher. Clark even helped with the mowing at the track.

The dog was slow out of the box, but worked his way to the front by the final turn before winning by 3.37 seconds in 29.62.

The son of Barcia Bale and Omega Lucy now has four wins from 10 starts.