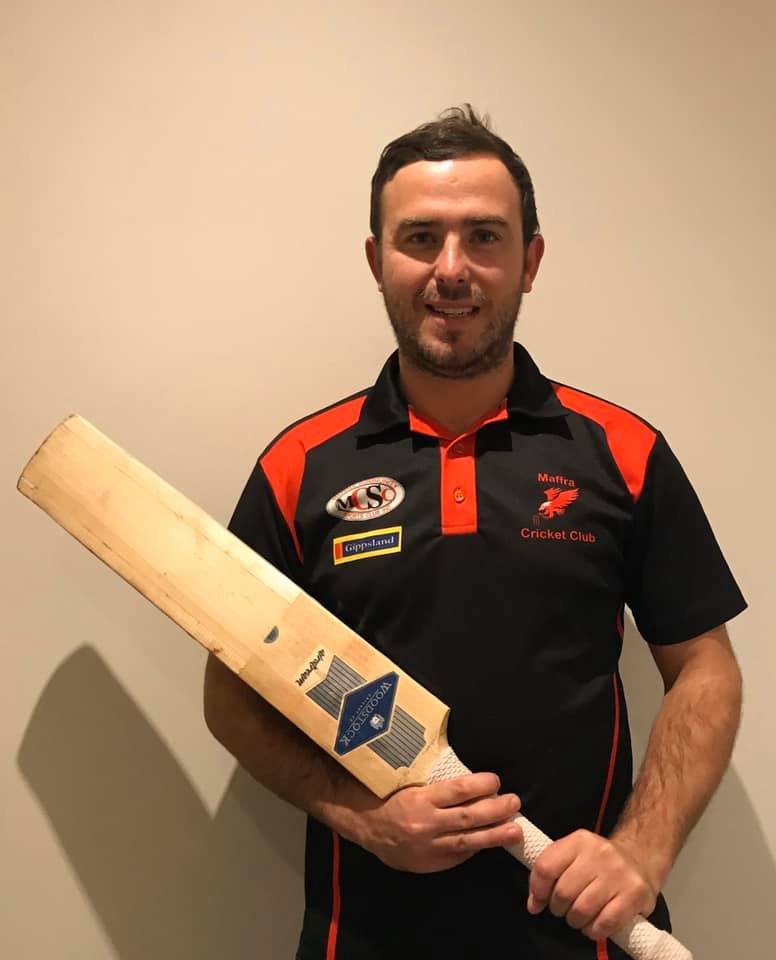 The 30-year-old will be aiming to take the first grade team deeper into March after a couple of near misses.

Since making finals in 2017-18, the Eagles have been unlucky the past two seasons, narrowly missing the post regular season action by just two points in 2018-19, and eight points last season.

Such was the evenness of the competition last season, Maffra could have finished the home-and-away season in second position heading into the final round.

In taking on the role, Hopkins will inherit a solid list, with all Maffra teams from seconds to fourths coming off the back of finals appearances last season, including the thirds, who claimed the premiership.

Since coming to Maffra from the United Kingdom in 2017, Hopkins has averaged a healthy 31.98 playing as a top order batsman.

With the new season on the horizon, Hopkins said he was looking forward to the challenge and working closely with first grade captain Josh Davis.

“I’ve always been interested in coaching – to give something back to the game is really important,” he said.

“I’ll have a vital role in selecting teams with Josh.

“He’s still young and will be fully in charge of the players which I think is good; you’ve got to have that balance of captain and coach because if it’s all on my shoulders it becomes a bit too much.”

As Hopkins explained, he was taking a steady approach to plotting the Eagles’ 2020-21 campaign.

“Obviously it’s going to be a weird season, but if it is a full season I’m looking at it in stages,” he said.

Given ordinarily the sign of a team on the rise is one which suffers close losses in the season prior, those in the Maffra camp will be hoping this is the case. The Eagles were competitive for most of last season, and could have taken a place in the finals as the third or fourth-ranked team.

Looking at things pragmatically, the only two teams which really comprehensively defeated Maffra last season were grand finalists Sale and Stratford, while the team had to risk losing outright trying to win by the same margin in the last home-and-away round against Rosedale-Kilmany to make finals.

Hopkins said the challenge this season would be to turn some of those close losses into close wins.

“We just have to be more clinical. There were too many games last season I felt we should have won – we were in commanding positions and let them slip and didn’t get over the line,” he said.

“We played competitive cricket but it’s such a tight competition that I reckon just after Christmas we lost important games then we were playing finals cricket two games before the actual finals started, they became must-win games.

“One that comes to mind is College toward the end of the season where we couldn’t quite bowl them out. If we had’ve got the full match points there that would have put us right in position for finals.”

The side could be bolstered by the availability of Daniel Bedggood, who may well be eager to play more often after the football season was cancelled.

“When Daniel plays it just brings a different atmosphere to the group,” Hopkins said.

“He’s a freak – he bats, bowls and is amazing in the field.

“When he played last season we were a different team and if we can get him for the full season, which hopefully we can with no football going ahead, hopefully he’ll do a full season for us.”

Hopkins will be able to draw on the experience of Maffra campaigners such as Davis, Brett Lanigan, Nathan Magnuson and Jim Beaumont throughout the season, and will want them all playing somewhere near their best consistently.

Maffra was helped significantly by the return of Ben Durrant last season, who came back after a few seasons in Victorian Premier Cricket, and took 24 wickets in just seven games.

The Eagles also have some promising young players who should get better as they get older.

Zach Kearns was one that impressed the new coach last season, and could be called on to shoulder more responsibility

“After Christmas is the best I’ve seen Zach bowl – he was absolutely fantastic,” Hopkins said.

“He was by far our best strike bowler at the back end of the season, so that’s fair due to him putting the work in and wanting to play A grade.”

With return to play guidelines hopefully not too far away, Hopkins said the main objective was to maintain an environment in which on and off field success directly correlated.

“It’s all about winning games of cricket – that’s what the main objective is.