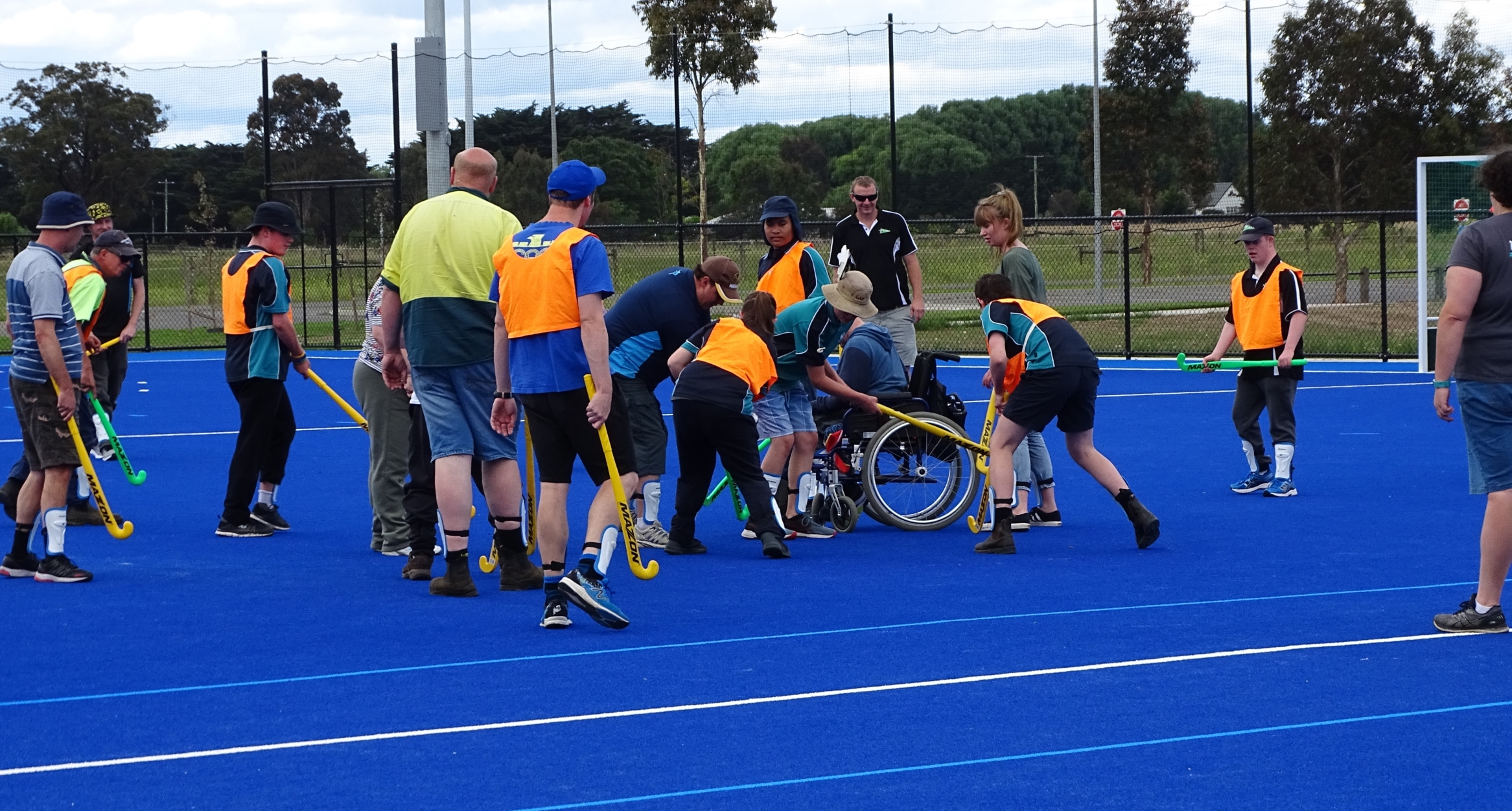 AFTER being forced to play in dangerous conditions at the weekend, East Gippsland Hockey Association has called for the installation of a safer synthetic pitch at one of the venues the association uses.

While the recent high rainfall totals have not affected the association’s synthetic pitches, muddy and unsafe conditions at a grass hockey field at Bairnsdale’s WORLD Sporting Precinct forced the women’s match between Swan Reach and Sale to be abandoned at half time, and the open match to be cancelled altogether.

On a neighbouring pitch, Maffra and Nagle battled it out, with the day beginning with the field partially submerged by water in the under 11s, until it deteriorated to thick mud for the women’s and open games.

The ball was often lodged in the field, with players attempting to bypass the sludge with overhead flicks.

East Gippsland Hockey Association released a statement on Sunday slamming the facility’s pitches as “dangerous”, “unplayable” and “not conducive for a sport that is mostly played with the ball on the ground”.

The association said any excitement for the return of competitive hockey after COVID-19 restrictions forced a season break soon gave way to disappointment.

“This was extremely disappointing for all involved after no hockey in 2020 and an already interrupted season in 2021,” the statement read.

“It has been decades since hockey was regarded a grass sport.

“Synthetic hockey facilities are vitally important to the growth of the game, and even more important for skill development.

“Since the development of the synthetic in Sale, the three clubs who call the facility home have seen significant growth in all age groups, and most particularly through their introductory Hookin2Hockey programs, which are now leading the way in Victoria for Hookin2Hockey facilities.

“In addition to growth and participant retention in the traditional formats, the synthetic in Sale has seen new social programs take-off with a number of adults taking up the sport for the first time or picking up a stick for the first time since school.”

The association said after the federal and state governments committed to more than $10 million in funding to upgrade the WORLD facility, the hockey community’s excitement was “fever pitched”, but had turned to disappointment as the details of the multi-million project emerged.

“The project will see competition lighting, fencing and a new shared pavilion with netball. However, it won’t deliver the most critical element for hockey as a synthetic surface has been omitted from the scope,” the statement reads.

“It is mind-boggling that with such a large investment, the East Gippsland Shire Council has elected to reinstate a natural turf pitch.”

The association believes the synthetic field would greatly reduce ground maintenance and the burden on volunteers from Bairnsdale, Nagle and Swan Reach hockey clubs, who spend hours line marking the field for game days.

“These savings in volunteer labour creates new [opportunities] to invest greater time in growth and development of community sport,” the association argues.

It says the synthetic field would not just benefit the hockey community, but the broader community.

By using the all-weather surface for practice, other sports clubs wouldn’t have to damage their own natural turf fields, or compete for time for other facilities.

“A synthetic hockey field is suitable for training by soccer and AFL clubs, and also creates the opportunity for other sports such as touch football, social hockey and soccer,” the statement reads.

“The Gippsland Regional Sports Complex facility has also played host to a range of all abilities programs.

“The synthetic surface has increased the access for a broader range of participants due to the stable, flat, and safer surface.”

East Gippsland Hockey Association has more than 450 playing members, with seven clubs fielding teams from Maffra through to Orbost.

More than half of its membership comprises of juniors, and half is also female — demonstrating the sport’s strong gender equity position.

“Hockey has had a long and proud history in the East Gippsland region, and the hockey community is still hopeful that the East Gippsland Shire Council will reconsider the project scope and include the provision of a synthetic field,” the association said.