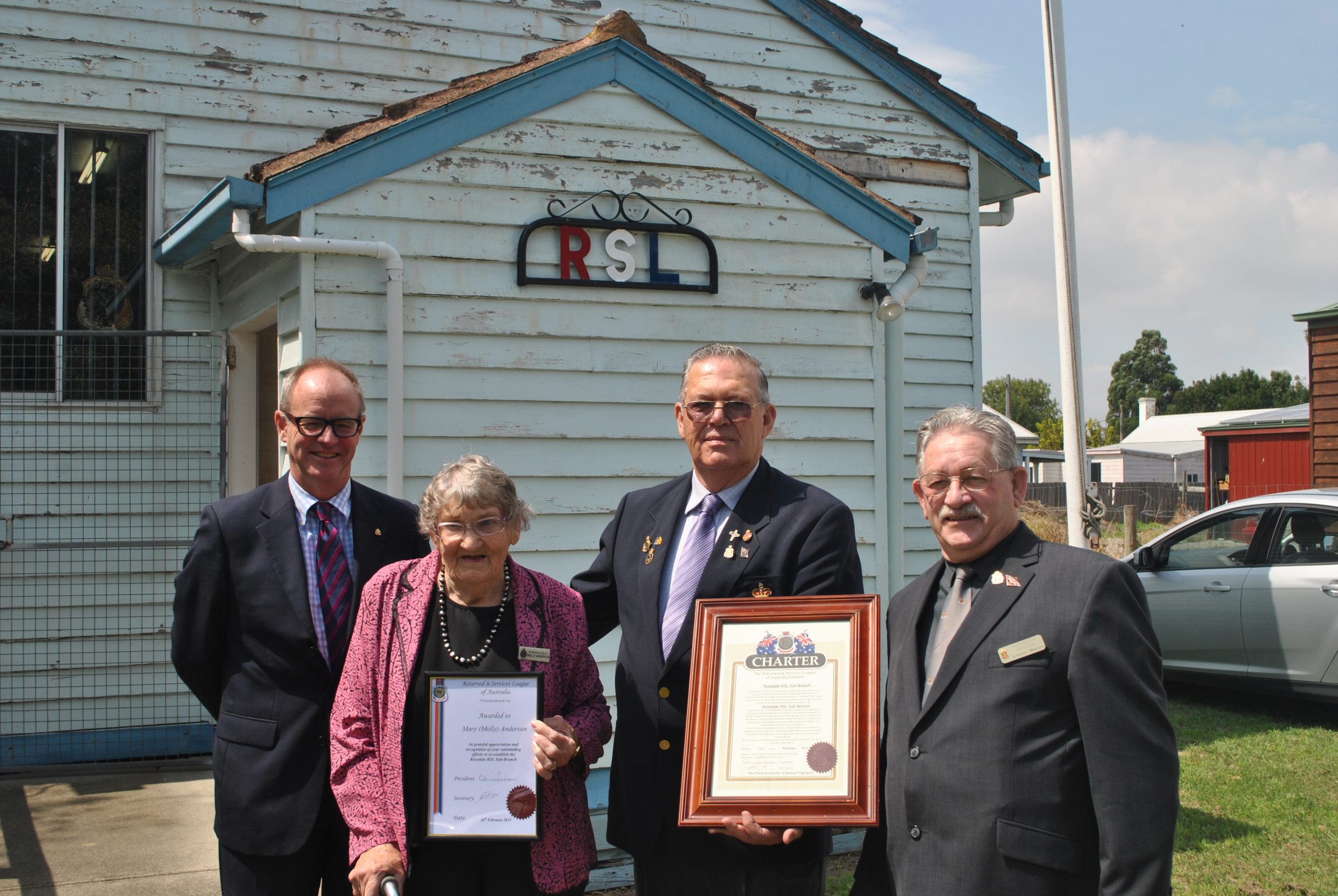 AFTER a nine year absence the Rosedale RSL officially re-opened on Thursday, the culmination of months of hard work by Rosedale locals and Gippsland RSL clubs.

Disbanded as an official sub-branch in 2006, the reissuing of the RSL sub-branch’s charter marked the success of a combined effort by the Rosedale women’s auxiliary and Maffra, Traralgon and Morwell RSL sub-branches.

After receiving a call for help from the women’s auxiliary, Maffra RSL president Lindsay Morton provided guidance and leadership throughout the dealings with the Victorian RSL’s head office, ANZAC House.

“When it first started I was approached because they (ANZAC House) were going to sell the hall,” Mr Morton said.

“When we first talked to ANZAC House they told us straight out, ‘No, it’s going to be sold,’ I didn’t quite accept that and they agreed in the end that if we could find 35 members we could open a sub-branch. Well, we went out and found 58.”

The newly reformed RSL has become the 289th sub-branch throughout Victoria.

Victorian RSL chief executive officer Michael Annett was on hand to present the charter to the sub-branch and said the credit was owed to the united community effort.

“There’s been very much a ground swell of community desire and all we’ve really done at the headquarters in Melbourne is facilitate that,” Mr Annett said.

“We’ve got 289 sub-branches and the majority of those are in country Victoria, and whilst most of the ones in country Victoria are not the big commercial clubs, they’re the footprint and they represent the opportunity for veterans and their families to connect with the RSL, especially if they need welfare or specialist support.”

He indicated it was fitting that in the centenary year of the ANZAC landings at Gallipoli, the Rosedale RSL would be able to hold its own commemorations after years of combining with the Traralgon RSL to mark major occasions such as ANZAC Day and Remembrance Day.

New Rosedale RSL president Bob Newton, said the opening of the sub-branch was something the whole of Rosedale could be proud of.

“It is the people themselves that have enabled this to happen, I’m just the figurehead basically.”

Mr Newton credited the work of the women’s auxiliary as being instrumental in saving the hall and recreating the sub-branch.

“Most of the thanks would go to the likes of Molly Anderson and Margaret Lobley, who have been unceasing in their efforts to save this hall. The only way they could achieve that was to re-establish the sub-branch.”

For the roughly 60 people gathered at the Rosedale RSL hall, it was a day to celebrate the success of a year-long battle.

“It’s been 12 months of hard work, but we’ve achieved a lot. It’s been a great result,” Mr Morton said.