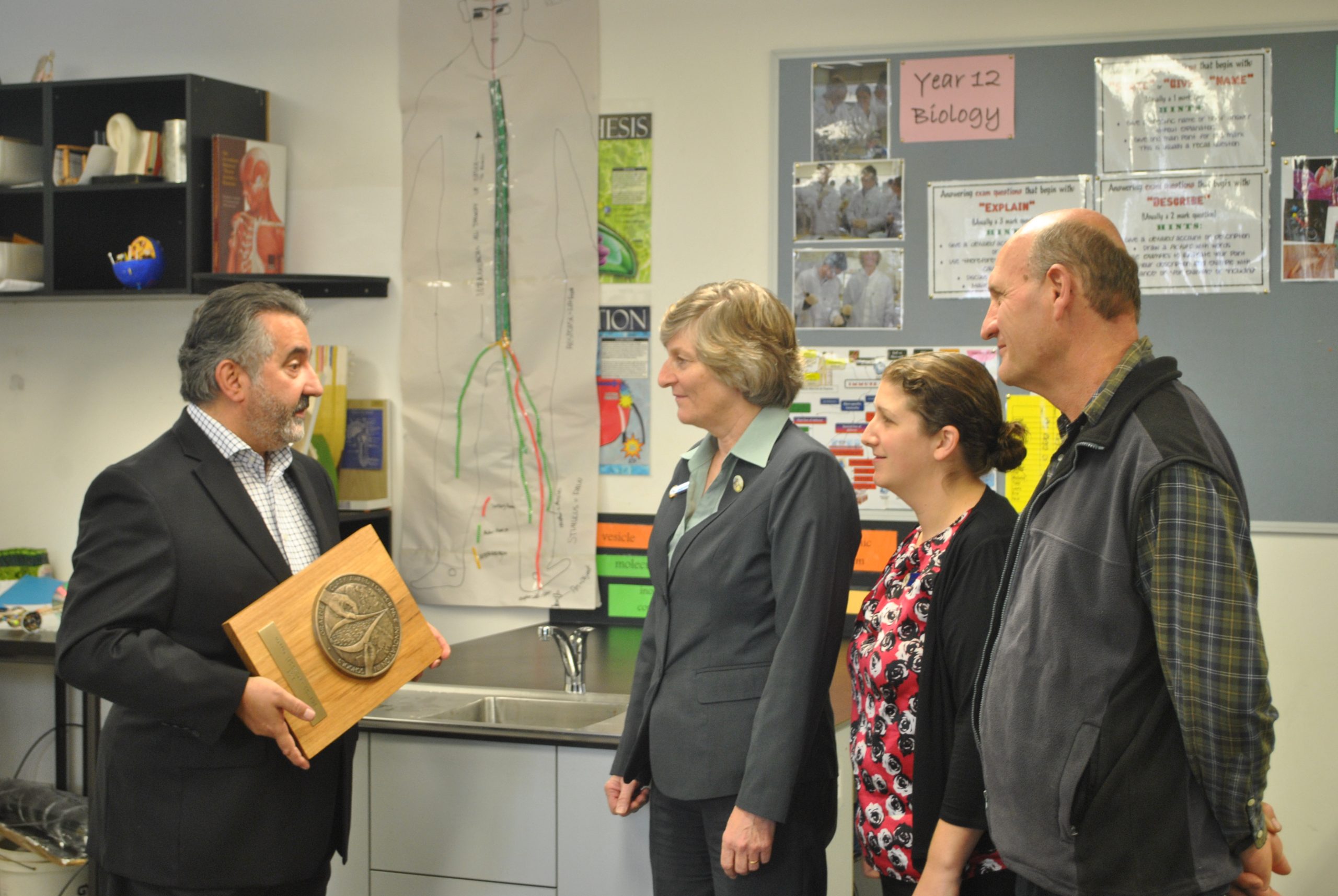 Named in honour of one of Australia’s most respected scientists, the Graeme Clark Oration award for Science Innovation was presented to the school for its year eight ‘Broadening Horizons’ program.

Aimed at increasing student engagement in science and developing the educational aspirations of students by working alongside local businesses, the project was the unanimous choice of judges.

Science teacher and instigator of the ‘Broadening Horizons’ program, Kylie Lambert, said it was terrific for the school and its students to be recognised for their efforts.

“It recognises the work that we’ve been doing in a small regional school, when sometimes it goes unnoticed,” Ms Lambert said.

“It’s extremely important because it does raise the profile of our school and also gives the kids a lot of confidence in what we’re doing here.”

Students worked in groups to produce a scientific investigation and were coached throughout by mentors from local organisations such as the Department of Human Services, Regional Development Victoria and the Baw Baw Shire.

Ms Lambert said students investigated issues of interest to them, from junk foods, to the human body, to the great outdoors.

“They ranged from things like looking at growth of bacteria and yeast and mould on hamburger buns — so a (range of popular fast food outlets’ buns compared) —and looking at why mould grows on burgers, and why it doesn’t grow perhaps on some others,” she said.

An additional aspect of the project, and one that was highly commended by the judges, was the collation of data before and after the program in regards to the connection between the students, their parents and the school, and also their level of engagement in learning.

The data showed that the number of students who believed science was useful in their everyday life had nearly doubled as a direct result of the project.

Also of note was the significant reduction in the stereotypical view that scientists are different to most other people.

Executive Director of the Graeme Clark Oration, Luan Ismahil, said the submission by Maffra Secondary College typified everything the panel was looking for.

“The Graeme Clark Foundation decided they would create this award essentially to profile the efforts of a school community in promoting science,” Mr Ismahil said.

“We wanted to find a school that had put together an initiative to work with the community and to inspire students into studying science.”

Mr Ismahil said that when it came down to deciding who would be crowned the inaugural winner, Maffra’s submission was the standout in everyone’s mind.

“It was all very positive and the panel decided that without question Maffra was really the deserved winner of this inaugural award.”

The college’s project culminated in an expo open to the community, where students displayed the findings from their scientific investigations.

From the school’s perspective, Ms Lambert said the biggest positive was the confidence the students had received by being recognised with such a prestigious award.

“A lot of our kids when they went to the Oration saw the kids from the private schools and city schools in their blazers with lots of resources,” she said.

“To have them gain that understanding that you can (also) do great things, it just requires a little bit of effort, to have them recognised like that by such a highly respected organisation like the Graeme Clark Foundation, it’s really great.”