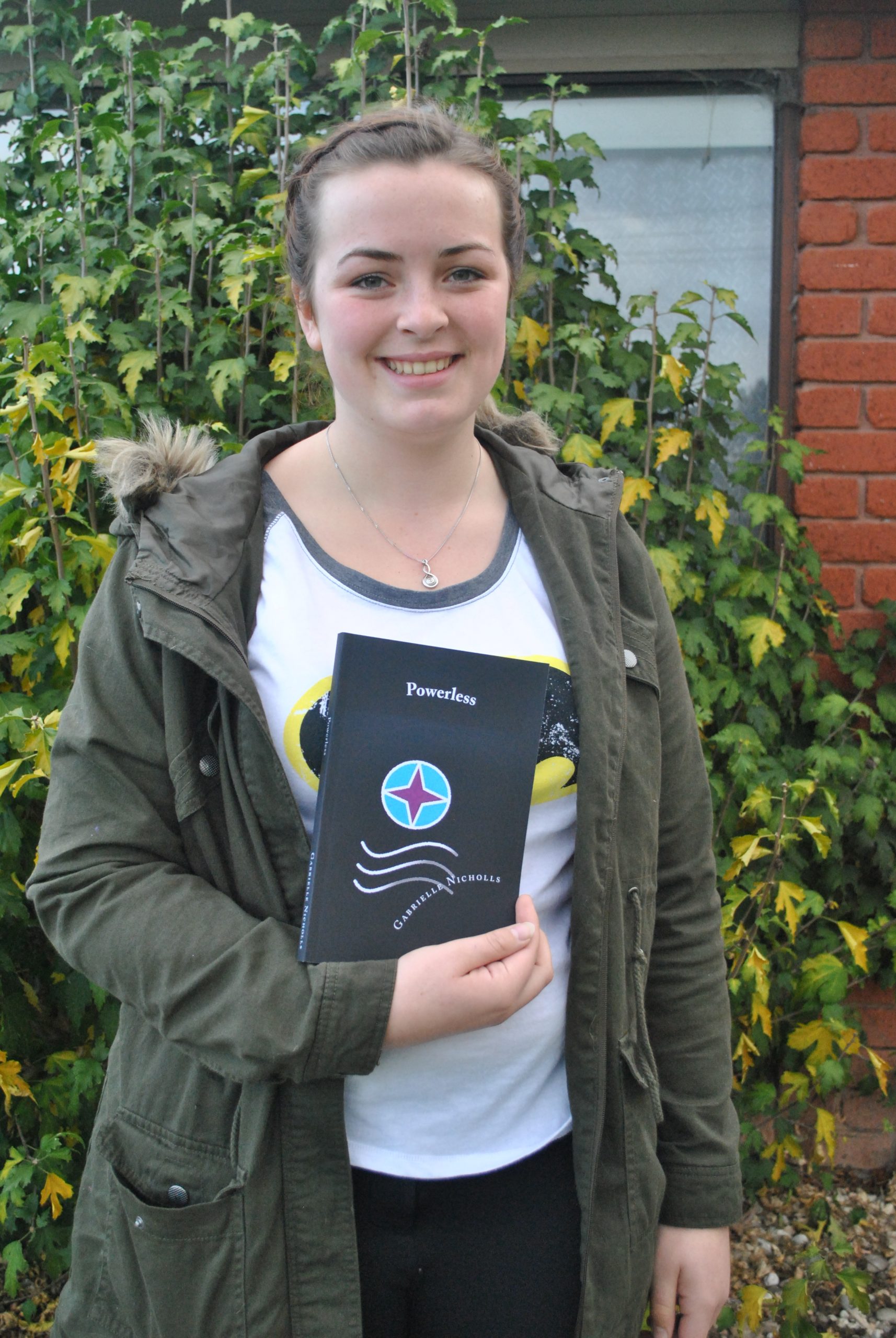 WITH dreams of becoming a writer since she first learned to read, Sale’s Gabrielle Nicholls made her dream a reality by self-publishing a novel at the age of 15.

The online National Novel Writing Month competition, usually shortened to NaNoWriMo by participants, challenges writers to set a word limit and complete a novel within one month.

After hearing about the competition from a librarian at school, Gabrielle set to work writing her debut novel Powerless.

The fantasy-themed book follows the journey of Jessica LaTista as the sidekick to her supernatural best friend Alicea.

“I won’t go into too much detail because I don’t want to spoil it, but it’s pretty much based around the sidekick in the story,” Gabrielle explained.

“Her best friend is turning into something weird and she’s kind of stuck along on the journey trying to help her out.

“She’s pretty much tagging along on her friend’s adventure but it’s more about her journey of coming to terms with her own humanity while she’s getting left behind in her friend’s magic tracks.”

Now aged 16, Gabrielle was only 15-years-old when she wrote, edited and submitted the book.

“The way to win it was just to hit your word count goal by the end of the month which I did, which was 35,000 words,” she said.

It was the first time Gabrielle had ever written something of that length before, and within such a limited timeframe.

Nearly every day when she got home from school, Gabrielle would do her homework before hacking away at the 35,000 word requirement she had set.

“So I was coming home, doing some homework and then writing,” she said.

Gabrielle said completing the book was a challenge as she was studying for school exams at the same time, but it was something she was committed to.

Just a few days before celebrating her 16th birthday in April this year, Gabrielle’s book was published.

She went on a self publishing website that was linked to NaNoWriMo where she was able to publish it for free.

“I got it published three or four days before my birthday,” she said.

“I got two proofs and I gave one of those to mum and then I got five free copies to give to whoever I wanted, so a couple of my friends have got one.”

Gabrielle’s proud mother Naomi Boss was the first person to receive a copy of the book.

“She told us all along she had to write a book in a month,” Naomi said.

“She didn’t really say much about it while she was doing it, she just kept it to herself.

“Once she did it I said ‘well I want the first copy’ and she signed it for me.

“She didn’t want to, she didn’t quite know what to write.”

Inside the cover, Gabrielle has written a dedication to her family and friends.

It said: “I would like to dedicate this book to all my friends and family who supported me throughout the course of my writing it. I know it wasn’t much fun so thanks for putting it for me.”

Underneath the dedication in her mum’s copy, she wrote ‘this means you mum. Thank you so much for your support’.

Even from a young age, Naomi said Gabrielle had a real talent for writing stories and creating worlds.

“Her bookcase is absolutely chock-a-block full of books.”

After reading Powerless, Naomi said she was quite surprised at how entertaining and well-written it was.

“As a teenage writer, you don’t know what to expect really but it was surprisingly very, very good,” she said. “I really enjoyed it.”

Naomi said she was happy for Gabrielle to pursue writing, as she clearly had both a passion and talent for it.

“As long as she’s happy I don’t mind what she does, but she absolutely loves writing so as long as she’s got something to back herself up I’m happy for her pursue it,” Naomi said.

Gabrielle said by having her book published, she had already achieved her life’s dream.

“It’s pretty much what I’ve aspired to do since I could first read,” Gabrielle said.

“I’m stoked. This is pretty much my life’s dream and I’ve achieved it and I couldn’t be happier.”

Gabrielle said she currently had about 33 stories on the go, with plans to pursue writing as a career after completing high school. Gabrielle has already sold some copies of Powerless online and has hinted there may be a sequel in the works.

Powerless by Gabrielle Nicolls is available from amazon.com.au