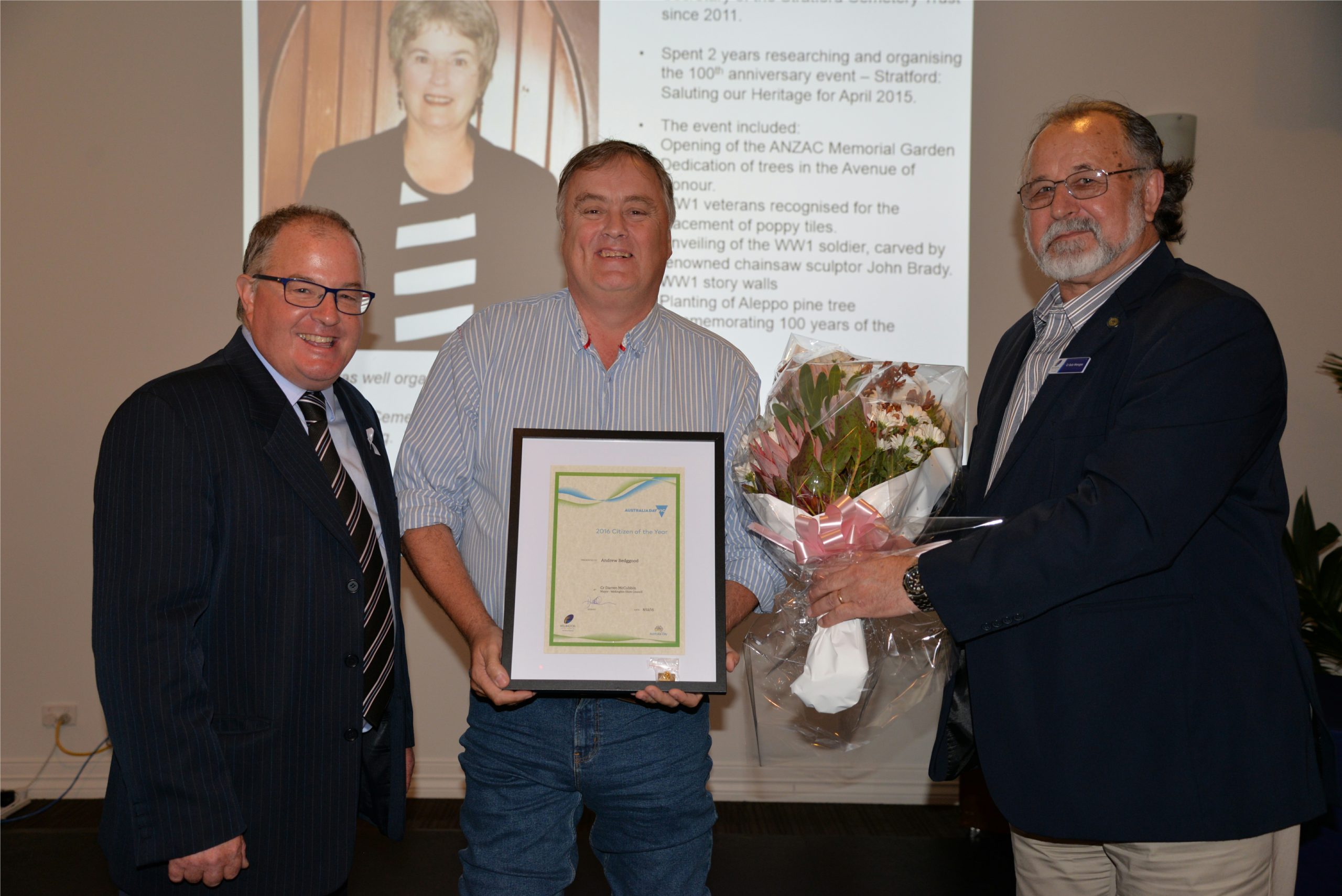 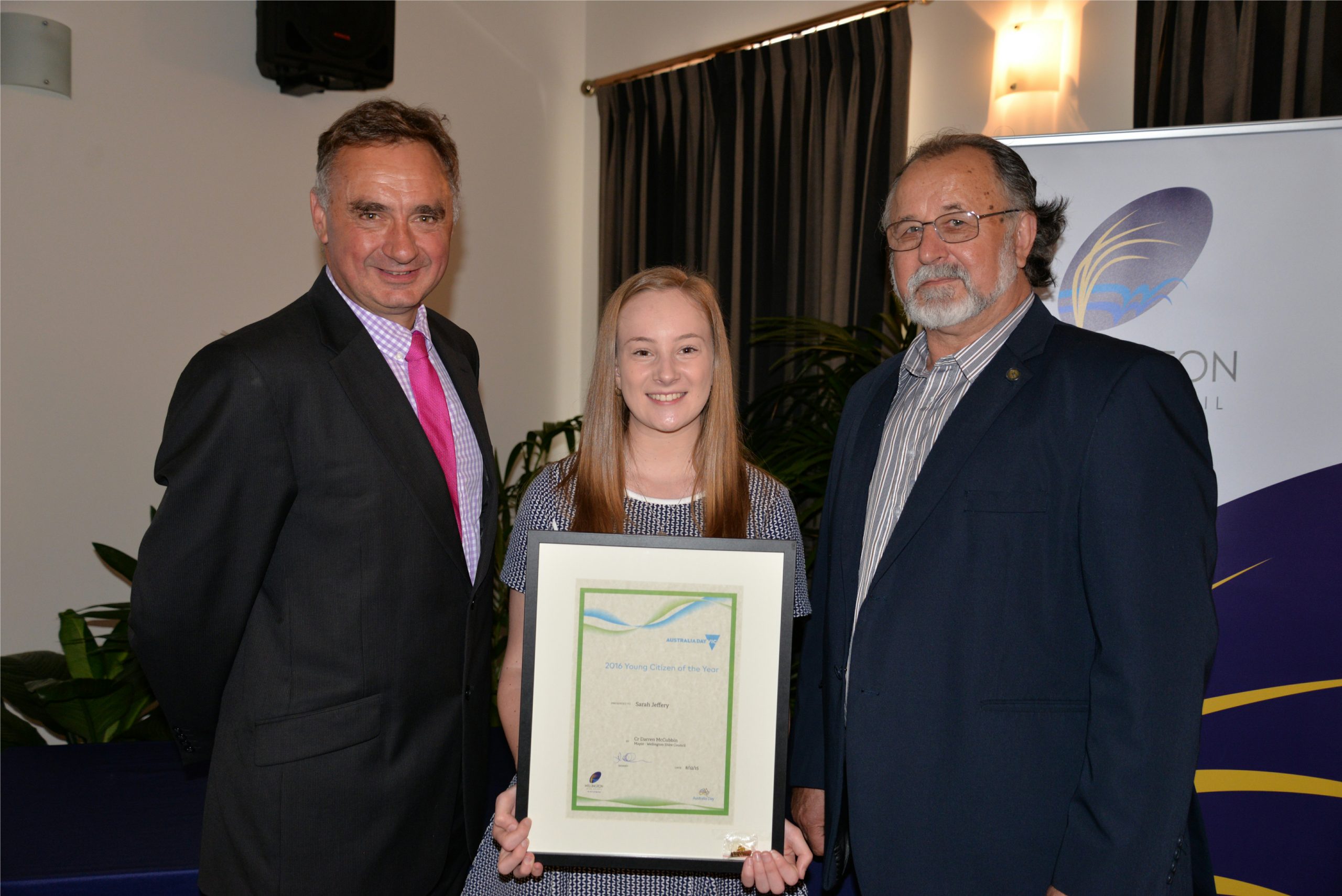 Also honoured were the Lake Glenmaggie Community Representative Group, which was named Community Group of the Year, and Stratford: Saluting our Heritage, organised by the Stratford Cemetery Trust, which was declared the Community Event of the Year.

“Congratulations to all of our worthy winners,” he said.

“On behalf of council, I acknowledge the important role that you play in making ours a happier, brighter and more compassionate community.”

Citizen of the Year 2016 Andrew Bedggood created the Sale to Sea Disability Kayak Challenge in 2009, with close friend Troy Anderson, to highlight the ability of people to overcome adversity and lead active lives.

He is a key driving force behind Sale to Sea and has taken responsibility for the majority of the work needed to bring each challenge to fruition.

Since its inception, Sale to Sea has donated to individuals and organisations needing assistance, with more than $30,000 disbursed in the past year.

Mr Bedggood lost the use of his legs in an accident in 1983, and the Sale to Sea Disability Kayak Challenge is an excellent demonstration of how people can overcome adversity, with many other participants joining in over the years with their own inspirational stories.

Mr Bedggood told the Gippsland Times he was urging people with disabilities and the able bodied as well to challenge themselves.

“Its not about winning or beating anybody else, it’s about challenging themselves to try something different and to see what it’s like for people with disabilities to achieve the same sort of goals.”

The challenge will be capped at 100 people for safety reasons, with a minimum of 25 per cent of participants having disabilities.

“I would even challenge the Premier of Victoria (to take part) ­— everyone comes under the pump,” he said.

Young Citizen of the Year Sarah Jeffery was recognised for participating in a wide range of community events, including Meals on Wheels,  a homeless sleep out, Global Reality Meal and many more.

As a student at Catholic College Sale, she has participated in the Sale Music Festival and College Walkathon.

The Stratford: Saluting Our Heritage event showcased the work of the Stratford Cemetery Trust, which spent two years researching local involvement in World War  1 to commemorate 100 years since the Anzac landings.

The project involved recognising local veterans who returned from the war, including opening the Anzac Memorial Garden for the 240 men and women across Avon Shire, as well as unveiling a statue by chainsaw sculptor John Brady.

Community Group of the Year was won by the Lake Glenmaggie Community Representative Group, for its work supporting the community there.

As well as staging several events, the group also bought a defibrillator for Coongulla and District Boat Club.

“Every year council is presented with the great privilege of determining who, of all the people nominated, should receive these awards,” Cr McCubbin said.

“Not only is it a privilege but it’s also an enormous challenge.

“Consider all of the things that wouldn’t have happened without our nominees.

“All of those events, programs, activities, charitable acts; all of those things that wouldn’t have happened without the people here today in this room.

“It’s never easy for councillors, as a group of people sitting around a table, to determine which nominees are our winners because quite honestly, it’s all of us that really win.

“Our whole community takes home the prize, because we are so fortunate to have such extraordinary citizens.”