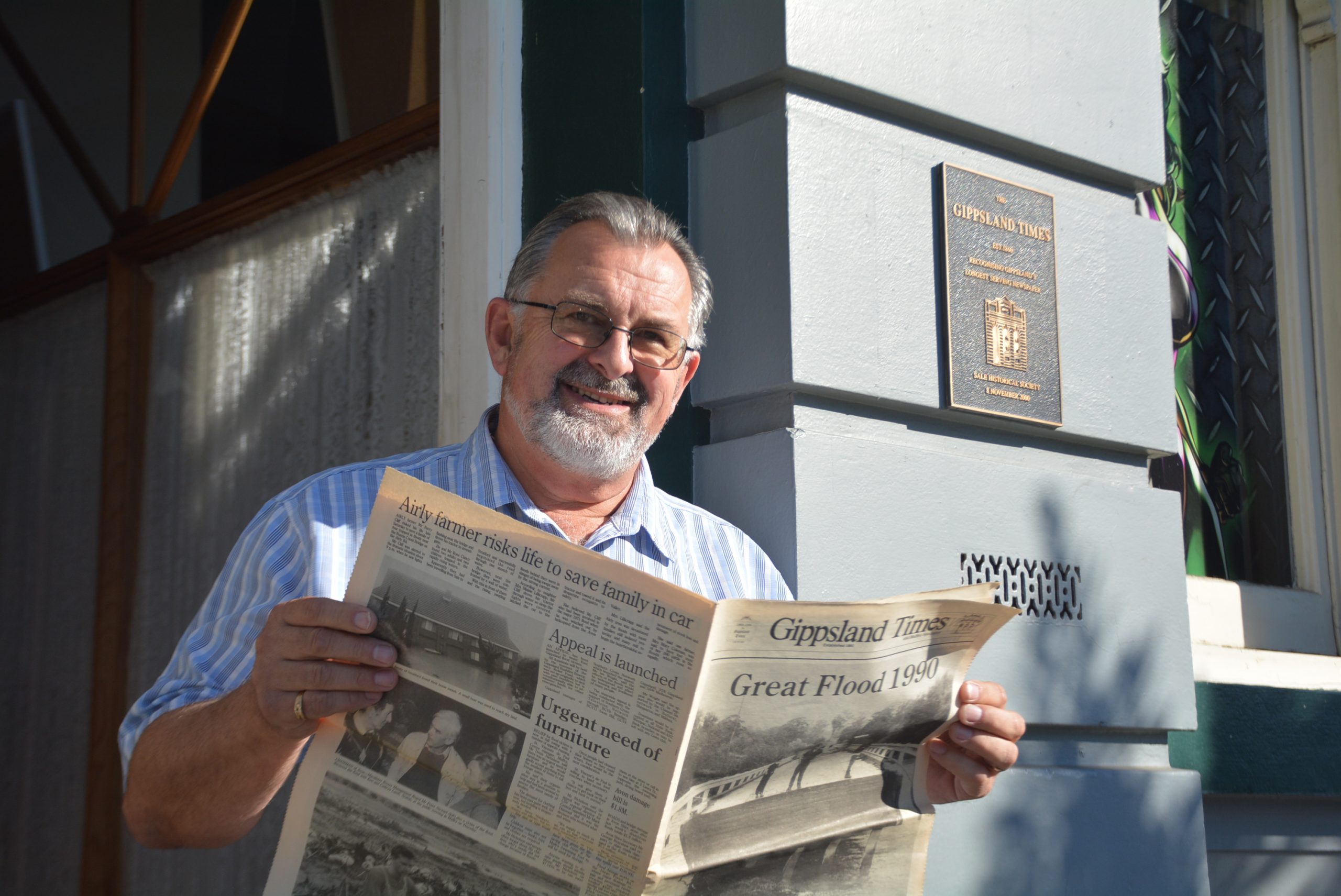 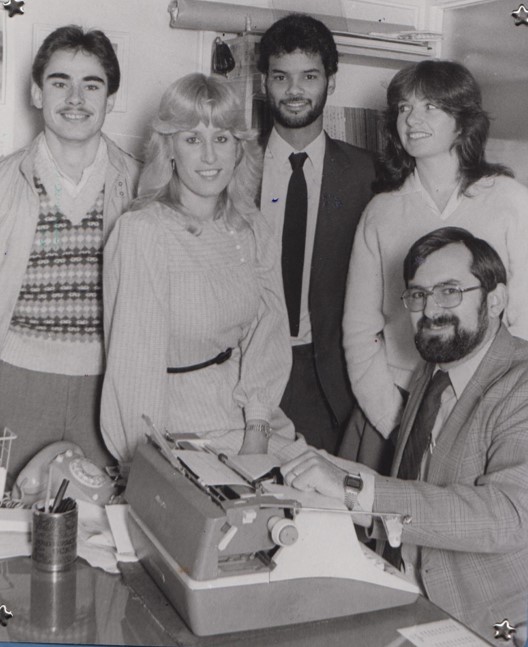 The working life of a country journalist can be fascinating and varied, and one of Gippsland’s longest serving journalists has seen a lot in his almost 48 years on the job.

From sightings of black panthers, Tasmanian tigers and UFOs through to court cases, car accidents and the demise of the National Safety Council of Australia Victoria Division, former Gippsland Times editor Colin Coomber has reported on them all. Colin was with the Times for 24 years – 16 as editor – before leaving to set up the award-winning monthly newspaper Catholic Life for the Catholic Diocese of Sale.

He began his cadetship with the Gippsland Times in 1972 a month after turning 17, and his love of storytelling blossomed. Never at a loss for words, Colin had found his niche.

When he began with the Times there were about 50 full time staff employed. There was an editor and four journalists, including two cadets, six administration staff, two (and later three) photographers and production and advertising employees.

In those days staff were paid in cash in little yellow pay packets, and it was Colin’s job to act as occasional ‘body guard’ to an office girl picking up large amounts of cash from the bank.

Journalists typed up their articles on typewriters using copy paper, which went to a dedicated proofreader before being re-typed by typesetters. Hot metal and linotype machines were used to produce the paper – but in an emerging computer age, things were changing.

The Gippsland Times embraced the new technology in the early 1980s, at first in its production department.

“We had these steel-cased computers,” he remembered. “The keyboards had about 180 keys. We were one of the trial sites for the Cybergraphics system for its Windows interface. There were lots of blue-screen crashes. That gave us two years of fun and games.”

Colin said the Gippsland Times was “really at the forefront,” of computerisation in the newspaper industry.

“As a result, the whole paper could then be put together with computers, with each department having its own input,” he said.

“Unfortunately the technological advances meant the loss of a lot of jobs in the production department over a 10-year period.”

The Gippsland Times had a lot going on in the 1980s. It had a full photography studio with darkroom, offering a commercial photography service. Often photographers would attend three weddings on a weekend, plus covering news. It also sold office equipment (it was the main supplier in town at the time) and was one of two commercial printing operations in Sale.

Today the Gippsland Times no longer sells office equipment and no longer has a commercial photography department, having returned to its core operation as a news outlet.

Colin paid tribute to the exceptional training he received as a cadet journalist at the Times, from the late Milton Lewis and former editor and manager David Tulloch.

“They taught me how to write, use correct tenses and to recognise the different angles you can take in presenting the news,” he said.

“There were always multiple news stories, because with four local municipalities there was always something going on, and this was supported by heavy reporting of Magistrates’ Court cases.

“In the early days we covered every single court case and that meant publishing the names, address and pleas of defendants – even for things as trivial as failing to stop at a stop sign or failing to have a TV and radio licence. Names sold papers.

“We also chased ambulances, fire trucks and police cars to get on-the-spot reporting. Sometimes we even got there before the emergency services, and at some accidents I saw some fairly horrific scenes which took many years to erase from my memory.”

Other memorable stories include the National Safety Council crash and the resultant fallout, and several fatalities involving RAAF aircraft.

Colin penned a weekly fishing column for about eight years, put together the popular ‘Sports Spy’ column which contained offbeat snippets from around local sporting clubs, and enjoyed police rounds.

“There were always quirky stories from people who thought they had the biggest tomato, carrot or cucumber ever grown, and then we had a spate of sightings of UFOs, black panthers and Tasmanian tigers,” Colin said.

Colin said he was disappointed with what he sees as “the falling standard of journalism in Australia” where the industry now relied on university graduates, rather than young people who worked their way up from on-the-job cadetships where every facet of the trade was learnt – from writing obituaries to covering courts.

“Nowadays many of the TV and radio journalists in particular no longer report the news,” he said.

“Instead they create the news and often try to be part of the story. What usually happens is that only one side of a story is told and that reflects the bias of the journalist or his or her media organisation. I have no time for it.”

Colin’s training at the Gippsland Times equipped him well to take on the challenge of Catholic Life in 1997, which has covered the area from Hallam to the New South Wales border. The paper was monthly until about four years ago when then Bishop Christopher Prowse made it two-monthly to free up Colin to take on extra duties as executive officer of the diocese charitable fund, Trinity Families.

The current Bishop of Sale, Pat O’Regan, has taken the opportunity to close down the newspaper to coincide with Colin’s retirement. The paper, which had a circulation of 16,000 across Gippsland, had its final issue at Easter.

“In recent times it has been recognised that younger people are not reading newspapers, but are getting their news from social media and other online avenues,” Colin said.

“The diocese is currently upgrading its website and will then begin producing a digital news service to replace Catholic Life.”

Colin said working for the Catholic newspaper had been rewarding.

“I tried to stick to the same formula which worked so well when I was at the Times,” he said.

“I didn’t make the stories too complicated for people to understand, and I made sure that there were plenty of different names in each issue. People love seeing their name in print.”

Colin said one of the biggest changes he had seen in Gippsland during his career was the aging population.

“Young people are going to Melbourne,” he said.

“Once upon a time there were lots of jobs here for them – now there’s not”.

Colin will have plenty to keep him busy in retirement. He participates in Parkrun most Saturday mornings, and dabbles in genealogy and cryptozoology [the search for and study of animals whose existence or survival is disputed or unsubstantiated]. He also plans to make good use of his fishing gear and to use his caravan a lot more.

Colin and his wife Nelly live in Sale. They have four children and eight grandchildren.