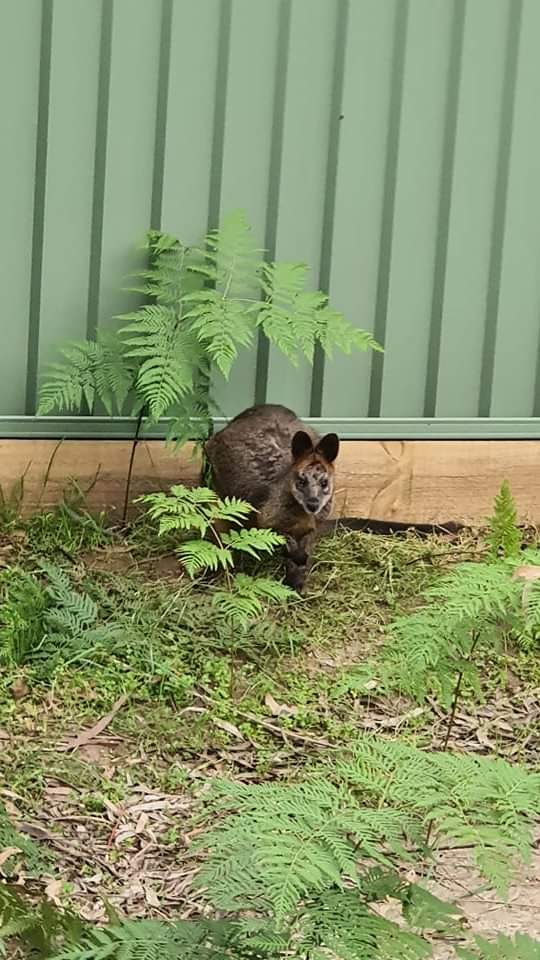 A DISTRESSED wallaby that made its way into Sale two weeks ago after heavy rain flushed it out of its home further south is on its way to recovery and release, thanks to the support network of Gippsland wildlife carers.

The frightened Swamp Wallaby’s dramatic attempt to flee from its flooded environment was captured on digital media when she ended up in Sale, hopping madly around residential streets for several days while trying to make her way back to the bush.

Despite numerous attempts to rescue the marsupial, she kept disappearing.

Thankfully, with the help of the public, the wallaby was eventually contained in a residential backyard in Sale before being darted and sedated by Stratford registered wildlife rescuer Debbie Rae, and taken to a wildlife shelter further east.

Wildlife rescuers were delighted to find she had a small pinky baby in her pouch.

Now safely at Waterholes Wildlife Shelter on Raymond Island, this beautiful but traumatised girl and her baby are resting peacefully.

Her superficial wounds have been treated and the pair will spend some time in captivity to make sure both are okay for release.

The fate of a kangaroo that also ended up frantically jumping through the streets of Sale two weeks ago is still unknown.

A Sale wildlife carer said heavy rain in late October, early November had flushed some wildlife out of the bushy environments surrounding Sale.

She said the animals were seeking drier ground but had become disorientated and had ended up confused and distressed in urban areas.