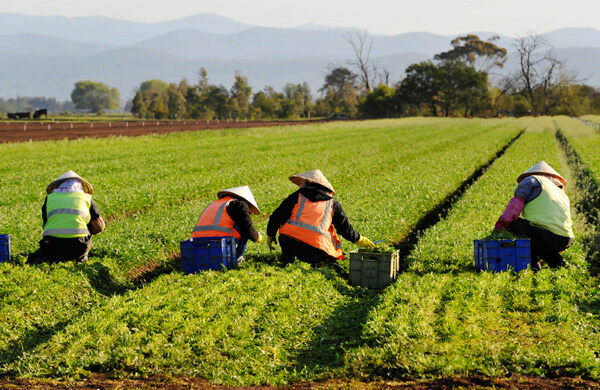 Group spokesperson, John Glover, a fifth generation local who lives in Sale, questioned whether Gippsland was at risk of being handed over or sold out to foreign ownership “just as our produce and natural resources are currently committed predominantly to Asian export”.

Gippsland 2020 is calling for an employment review to re-establish and emphasize the importance of supporting local economies, employment and culture.

“There are unprecedented numbers of foreign workers coming into our towns, particularly Sale, and this is undermining job security and employment for locals,” Mr Glover said.

Mr Glover said the latest figures from the Australian Bureau of Statistics for unemployment in Gippsland were alarming.

“It identifies areas of unemployment as high as 20 per cent, particularly youth unemployment,” he said.

“Our youth in Sale may be seriously disadvantaged with less opportunities for full-time employment as a result of a migrant workforce and even our higher graduates are competing with foreign students who have working rights up to four years, even if it’s waiting on tables.”

Mr Glover said the latest report from Monash University’s Centre for Population and Urban Research said that net jobs growth across Australia in the past three years had been filled by overseas migrants.

“Would our taxpayer dollars not be better spent on programs to harness the energy of our unemployed youth and investing in their education and future rather than supporting migration programs such as the Coalition’s liveinvictoria.vic.gov.au program?”

“The National-Liberal Coalition government encourages migrants to purchase existing businesses in Gippsland or start new ones.

“Are these businesses actually employing Australians or are they employing sponsored family members?’’ Mr Glover asked.

Mr Glover said an employment review was desperately needed to create a sustainable future in the region for next generations of Gippslanders and to maintain the Gippsland brand as an Australian brand.

He called on Regional and Rural Development Minister and Gippsland South MLA Peter Ryan to push for an employment review for Gippsland, and undertake remedial action before the November 29 state election.

“Let’s support Aussie jobs for Aussies and promote a local, vibrant and sustainable region for the people of a 21st Century Gippsland,” Mr Glover concluded.

Mr Ryan was contacted for comment but referred the issue to Gippsland MHR Darren Chester, saying they were federal, not state issues.

Mr Chester said he was deeply concerned by the tone of the statements attributed to the Gippsland 2020 group.

“Many industries in Gippsland export products to Asia and around the world which creates jobs and prosperity in our community,” Mr Chester said.

“The tone of Gippsland 2020 comments seems to be anti-trade, which is a very short-sighted view of economic growth in our region.

“In particular the Macalister Irrigation District is a major employer in our area and will increasingly rely on access to international markets for our world class products.

“As recently as this week, we’ve seen very strong community support for a Free Trade Agreement with China,

to help get a better deal for our local dairy producers.”

Mr Chester said while he supported calls to help more Gippslanders find work, he rejected the claim that locals were missing out on jobs because of foreign workers.

“There are laws in place to discourage exploitation and manipulation of the system, with inspectors regularly carrying out compliance checks,” Mr Chester said.

“I have raised concerns regarding alleged illegal work practises directly with relevant Ministers over the past five years, along with asking councils to investigate allegations of breaches of housing regulations and unsafe living conditions.

“I am assured that complaints and reports from the community are taken seriously and fully investigated with significant penalties applying for any breaches.”

“Ms Cash assured me that the Department of Immigration and Border Protection and the Fair Work Ombudsman take all allegations of potential exploitation of workers by labour hire companies seriously and such matters are referred for investigation,” Mr Chester said.

“I agree there are areas that can be improved with regard to labour hire schemes, but we must also acknowledge that the majority of labour hire companies do work within the rules and any reform measures should not unnecessarily burden them with additional red tape.”