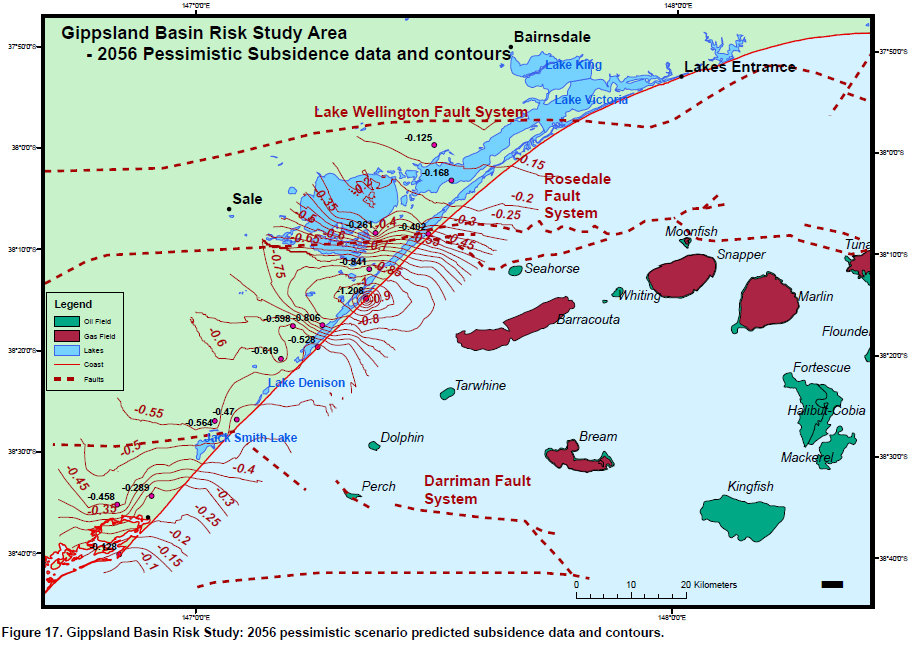 POLITICAL pressure group Gippsland 2020 is calling on the state government and Gippsland South MLA Peter Ryan to formalise a subsidence disaster and economic protection plan for Gippsland before the November state election.

Gippsland Land Owners Compensation Inquiry spokesperson Morgan Knoesen said it was imperative residents and their families, homes, farms, properties and investments “were not disadvantaged by the environmental risks associated with government regulated oil, gas and coal industries in Gippsland”.

“CSIRO and independent scientists have estimated the likelihood of subsidence epicentres to be greatest around Seaspray, Golden Beach and Loch Sport where 0.2 to 1.2 meters of land sinking is predicted to occur over the next 35 years,” Mr Knoesen said.

“When you extract vast amounts of water, gas and oil from underground, this drawdown creates depression zones below the surface where the land overhead is at risk of sinking or collapsing.

“This is a common global phenomenon that occurs where extractive oil, gas and coal industries overdraw from aquifers and oil and gas reserves,” he said.

Mr Knoesen said thousands of billions of litres of water, gas and oil had been extracted from the Latrobe Group aquifer by the offshore oil and gas industry and the Latrobe Valley coal mines since the 1960s.

“In places in Gippsland’s aquifer, levels have dropped by one metre per year since then as a result,” he said.

“Gippsland aquifers are some of the world’s most researched aquifers due to the many industrial and mining processes that affect these valuable resources.”

Mr Knoesen said state and federal governments had sponsored numerous scientific research projects to determine the threat of subsidence in the region.

“To date, no proactive action has been taken by government to reduce the causes of predicted subsidence, establish an emergency economic plan or consider the possible relocation of threatened towns if it (subsidence) is fully realised,” he said.

“They haven’t acted on their own and independent scientific research that we (taxpayers) paid for.”

“In 2008 the state and federal government treasuries awarded millions of dollars in assistance packages to Yarram farmers affected by loss of groundwater resources as a result of extractive oil, gas and coal industry operations in Gippsland.

“This was the first time government responded to the concerns of Gippslanders, but they still haven’t solved the problem.

“The oil, gas and coal industry continues to overdraw on our aquifer — with our government’s permission.

He said the ‘Doctrine of Diluvion’ as described by the Victorian Planning and Environmental Law Association introduced some legal complexities for land owners affected by gradual subsidence and sea level rise along the Victorian Coast.

“It states ‘the boundary of land abutting the sea can be diminished as a result of erosion and the gradual encroachment of the sea. In this case, land that has been encroached upon by water ceases to belong to the former owner and will be owned by the Crown instead.’

“Although extensive research has been conducted by the University of Melbourne regarding equitable outcomes to assist affected Victorian coastal land owners, it requires full participation and understanding by the land owners of theses legal complexities to ensure a balanced outcome is achieved when negotiating with government,” Mr Knoesen concluded.