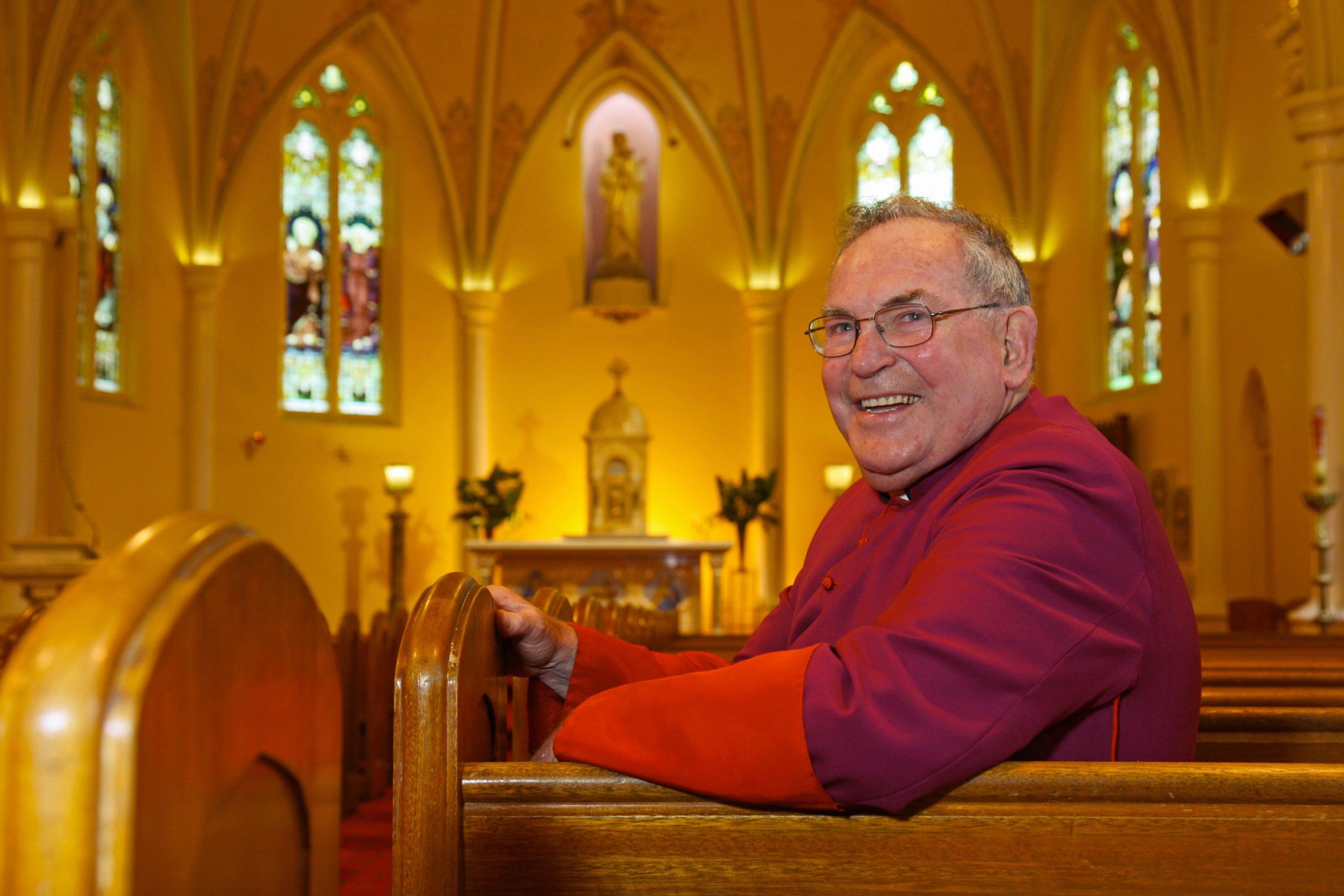 FORMER Catholic Bishop of Sale, Jeremiah Joseph Coffey, died on Wednesday morning at the age of 81.

His death at Bairnsdale Hospital followed a major stroke almost a week earlier.

Bishop Coffey was the seventh Bishop of Sale, the fourth bishop to be born overseas and the third from Ireland.

The son of an engineer, with a grandfather noted for building fine stone churches in and around Cork, Ireland, Bishop Coffey was born in Blackrock, Cork, on January 1, 1933.

He attended University College, Dublin, where he obtained a Bachelor of Arts degree, later attending All Hallows College, Dublin, to study for the priesthood, often saying he agreed to go to seminary “to give it a go”.

The college ordained priests to serve as missionaries in foreign dioceses, and Bishop Coffey said he chose to come to Australia, and more specifically the diocese of Sale, because it was near the sea, as was his native Cork.

He was ordained a priest in 1958 and journeyed to Australia by boat immediately afterwards, serving in subsequent years in Bairnsdale, Sale, Traralgon, Omeo, Iona, Yallourn and Churchill.

He was appointed Episcopal Vicar for Education in 1982, and then went to Corpus Christi College in February 1987, initially as a tutor, but in June that year was appointed rector, replacing Cardinal George Pell who was made an Auxiliary Bishop for Melbourne Diocese.

In this role he was known as making some difficult decisions at the seminary, convincing a few seminarians that their lifestyles were not suited to a religious vocation.

He was appointed Bishop of Sale on April 8, 1989, ordained on June 30 in a huge marquee at Catholic College Sale’s St Patrick’s campus.

Diocese media officer Colin Coomber, who knew Bishop Coffey well, credited him with bringing the Catholic Church in Gippsland into the modern world.

“During his 19 years as Bishop of Sale, he became a much-loved leader known throughout the diocese for his pastoral care,” Mr Coomber said.

He established the diocesan pastoral council to encourage lay involvement, set up a pre-paid funeral fund and developed the Journeying Together five year pastoral plan.

“He also recognised that many families were struggling to cope with the stresses of modern life and so established the Bishop’s family Foundation as the diocese’s charitable arm,” Mr Coomber said.

“People rallied behind him and within a month he received pledges of $1 million.

“This philanthropic trust, now known as Trinity Families, was of a type never before seen in Gippsland as every cent donated to it still remains, earning interest to be allocated annually to charitable organisations running programs which support families.”

In 1993 Bishop Coffey undertook a major refurbishment of St Mary’s Cathedral in Sale, which included the assembly extension area on the north side with its curved glass windows.

Bishop Coffey became an Australian citizen in 1996 and retired as bishop on January 2, 2008, the day after his 75th birthday.

He lived in retirement in Paynesville, overlooking the Gippsland Lakes. Bishop Coffey’s health went into serious decline when he was holidaying in Ireland in 2010.

He had surgery for bowel cancer and spent almost six months recuperating before being allowed to fly back to Australia.

Following tests in late 2011, he was again operated on, this time in Box Hill, to remove a tumour on his liver and a small bowel cancer.

While recovering from this major eight-hour operation he suffered a minor stroke, and was then diagnosed with pneumonia.

On his return to Gippsland, Bishop Coffey became a resident of Eastwood Nursing home at Lucknow and recovered enough from his setbacks to allow him to discard his wheelie-walker and instead use a walking stick.

He enjoyed frequent outings with local clergy and residents which often ended with one of his favourite meals, fish and chips overlooking the water.

In recent times he had surgery to allow better blood flow to a foot suffering the effects of diabetes.

Bishop Coffey suffered a major stroke on November 13 and died in Bairnsdale Hospital about 4am on Wednesday morning.

Rosary will be recited at St Mary’s Catholic Church, Bairnsdale from 5pm on Monday, December 1 followed by Vigil Mass from 6pm.

The funeral will then process to St Mary’s Cathedral, Foster St, Sale, for the Rite of Reception arriving about 8.30pm. Prayers will follow until 11pm.

The Solemn Mass of Christian Burial will be celebrated at St Mary’s Cathedral on Tuesday, December 2 from 11am.

The burial will take place immediately afterwards in the grounds of the cathedral.