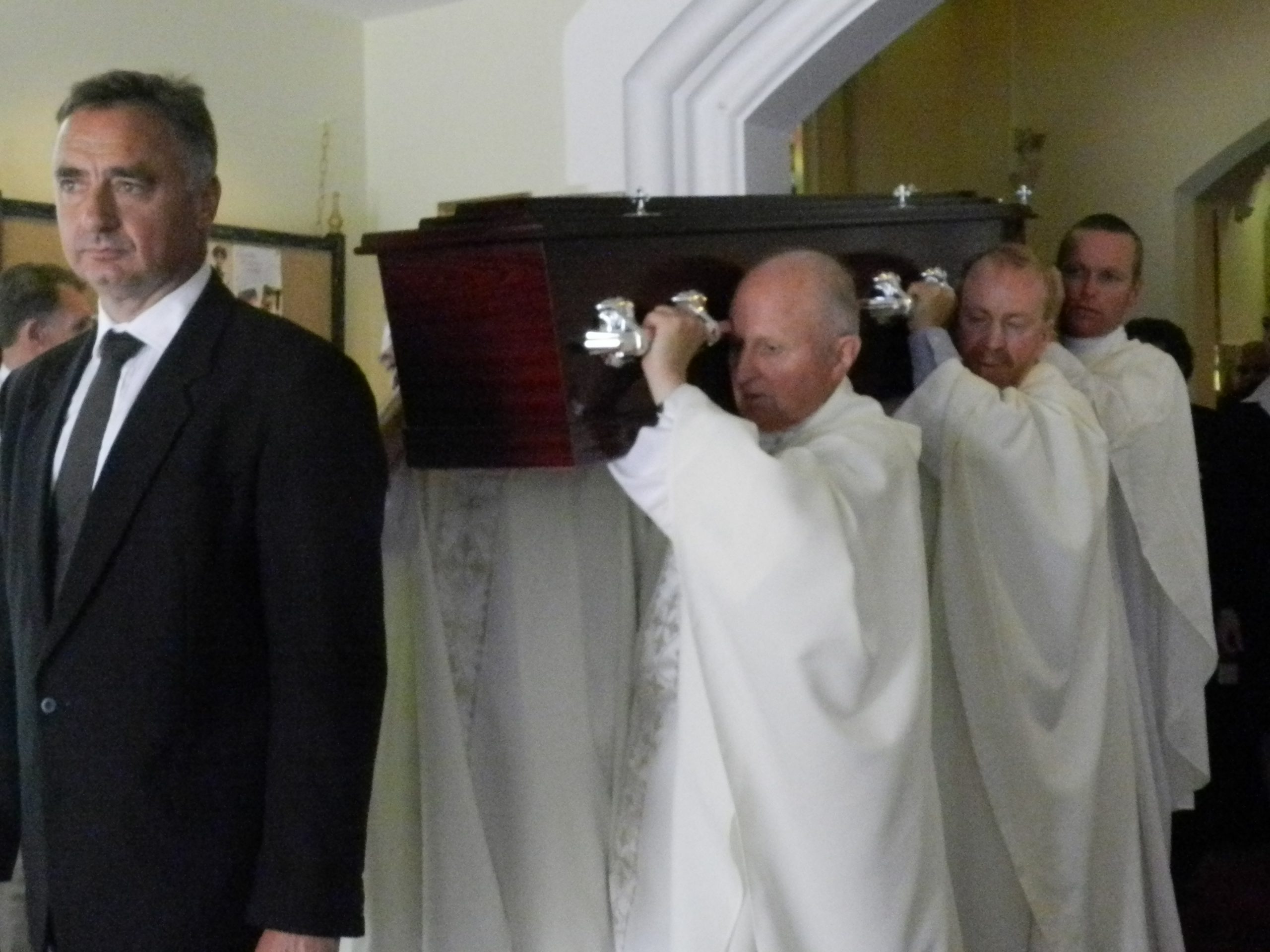 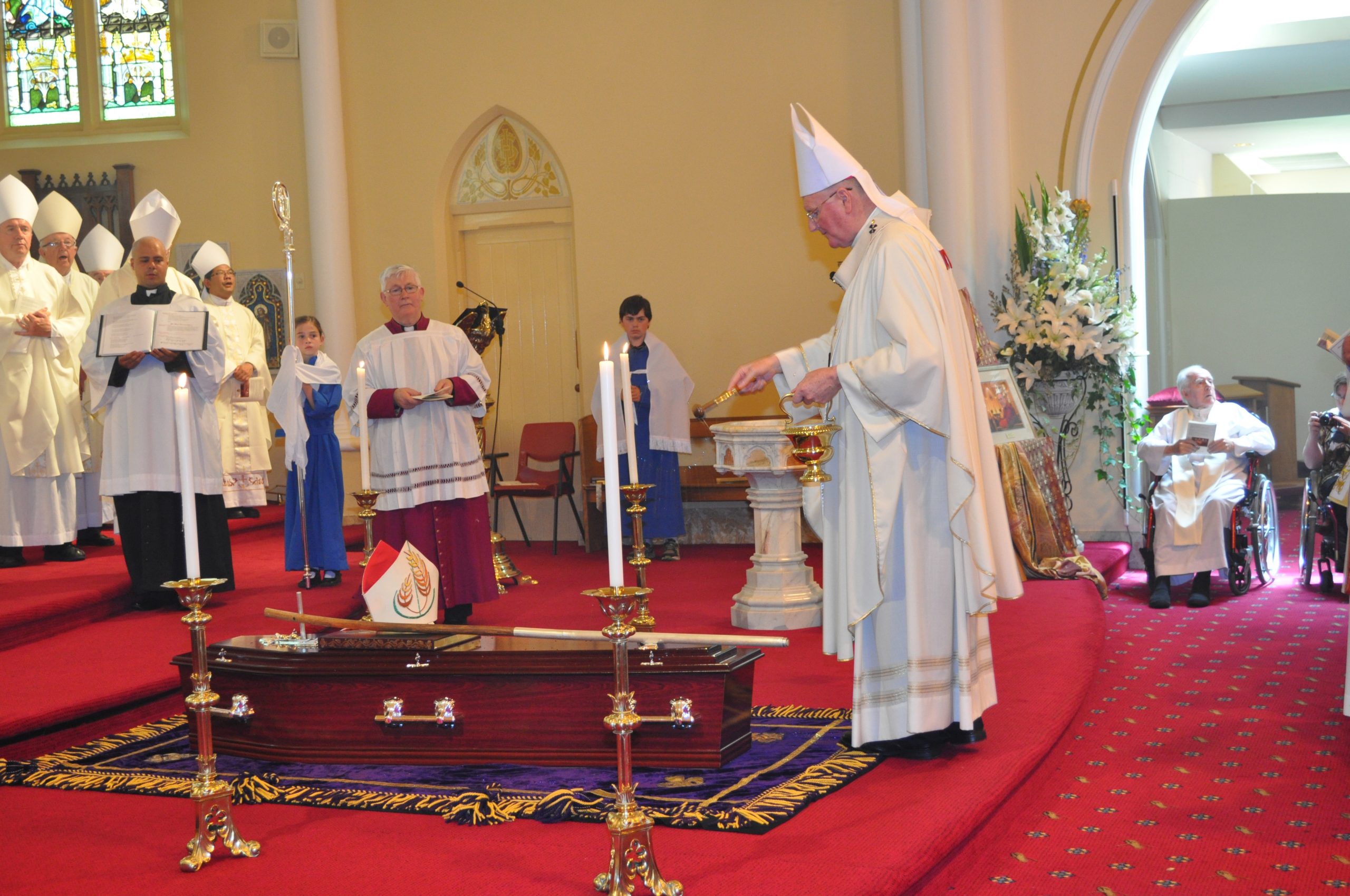 THOUSANDS of people gathered at St Mary’s Cathedral in Sale for the funeral of Bishop Emeritus Jeremiah Joseph Coffey on Tuesday.

Funeral rites began in Bairnsdale at 5pm the night before with recitation of the rosary, followed by a Vigil Mass attended by about 400 mourners.

The bishop’s sister Ita Williams, her son David and a niece Kate Coffey travelled from Cork, Ireland, for the funeral.

Following the Vigil Mass the bishop’s coffin was taken to St Mary’s Cathedral for a rite of reception, followed by prayers and another rosary.

Bishop of Bathurst Michael McKenna, at one time a priest of Sale Diocese and secretary to Bishop Coffey, attended along with six other bishops.

Some 68 priests, four deacons and four seminarians and about 40 religious sisters and brothers attended.

State and federal politicians and local government mayors were also among the guests.

Diocesan administrator Fr Peter Slater spoke of Bishop Coffey’s strength of leadership and his willingness to involve the people in important issues.

Fr Slater said the bishop had always had the ability to look at issues from a different perspective, adding the human dimension to discussions, and this was always evident at gatherings of priests where his wisdom came to the fore.

He said it was a surprise to have one of the diocese’s own priests elevated to be bishop, but history showed just how richly blessed the diocese had been to have him as its chief shepherd.

He said he involved people, but also knew patience as some initiatives often took a long while to come to fruition.

Bishop Coffey had developed his pastoral plan In Joyful Hope after extensive consultation and it had led to the development of pastoral councils and the youth ministry in Sale Diocese.

Fr Slater said that knowing his priests and his people was a hallmark of Bishop Coffey.

He arrived in the Diocese on September 15, 1958, and served in the parishes of Bairnsdale, Sale, Traralgon, Omeo, Iona and Yallourn, before being appointed the first parish priest of Churchill, which had been created from the Morwell parish.

Pope John Paul II appointed Bishop Coffey seventh Bishop of Sale on April 8, 1989, and he was consecrated in Sale by Archbishop of Melbourne, Sir Frank Little on June 30, 1989.

Bishop Coffey was the fourth Bishop of Sale to have been born overseas and the third to come from Ireland.

He retired as Bishop on January 2, 2008, and lived in retirement in Paynesville until December 2011, when he moved into Eastwood Community Care at Bairnsdale.

He led the diocese for 19 years.

Bishop Coffey died at Bairnsdale hospital on November 19 at the age of 81 following a stroke at Eastwood nursing home a few days earlier.