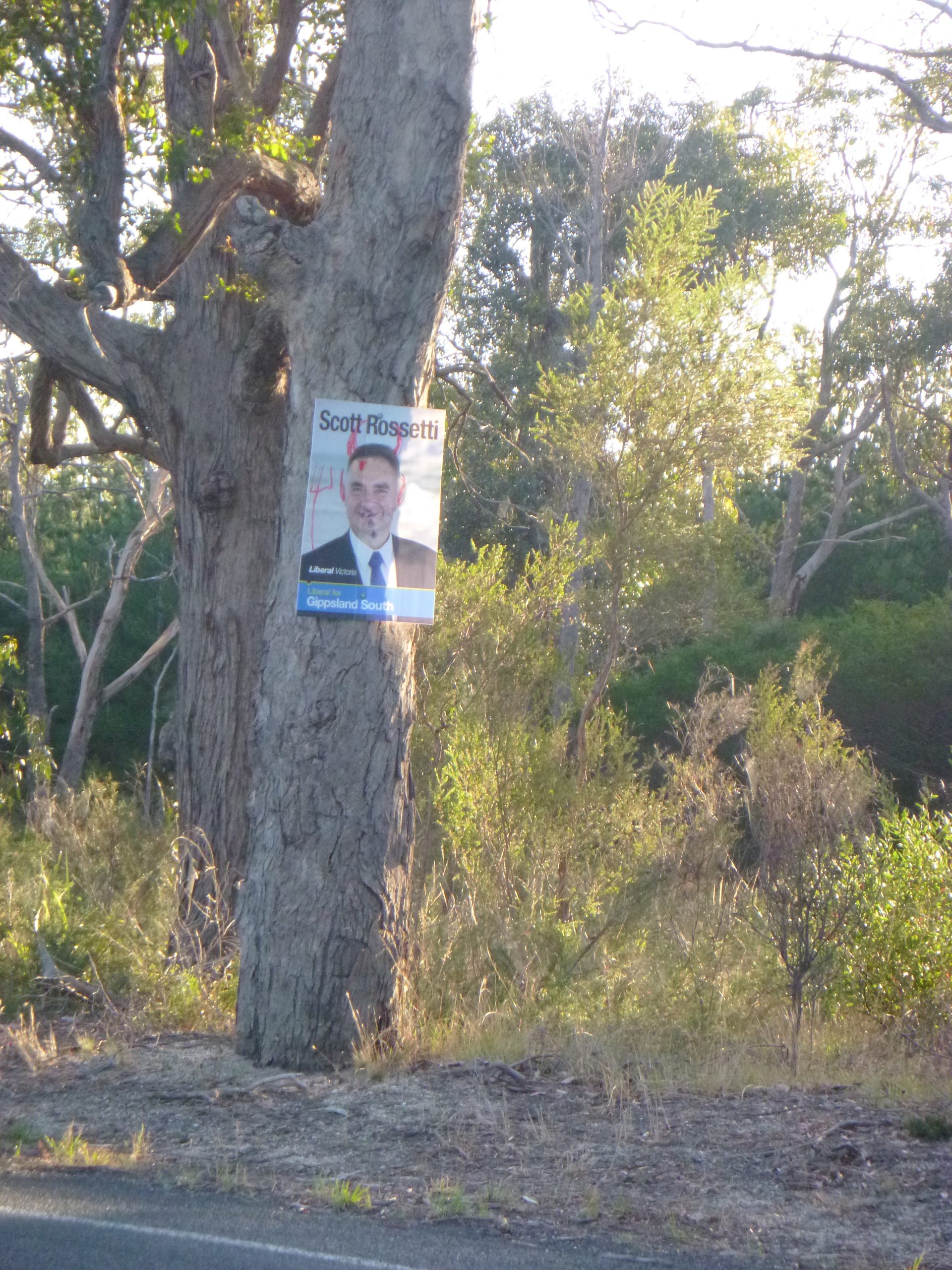 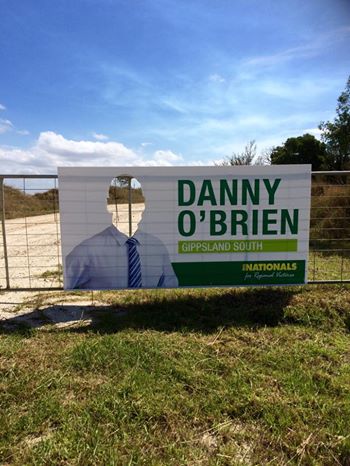 THE Liberal Party has claimed a “dirty tricks” campaign is behind the removal of Gippsland South by-election campaign signs for its candidate Scott Rossetti.

While the party claims many of the signs were torn down from private property, it is understood quite a number may have been illegally placed on roadsides without permission.

The Nationals have denied involvement.

Claims of political sabotage has put the use of signs and other campaign techniques, such recorded phone messages, under the microscope.

Under VicRoads and Wellington Shire Council guidelines, political signs are not allowed along roadsides. Both organisations have removed signs from the side of roads in recent days.

Liberal candidate Scott Rossetti has taken leave from being a Wellington Shire council to contest the by-election.

Liberal signs could be seen along the South Gippsland Highway and some have been defaced.

The Liberals have made an official complaint to the Victorian Electoral Commission, regarding what they claim is an attempt to sabotage Mr Rossetti’s campaign.

They claim at least 40 signs have been torn down across the electorate.

Party state director Damien Mantach said many of the signs had been ripped down and stolen within a couple hours of being erected.

In one instance, a sign was erected in a front yard of a home at noon and was torn down by 2pm.

“Not only does this activity constitute political sabotage, it is also criminal activity that costs the campaign hundreds of dollars each time the material is defaced or stolen,” Mr Mantach said.

“This should be a campaign about who has the best credentials and local knowledge to represent the Gippsland South electorate.

“These gutter tactics have no place in Australian political campaigns.”

Speaking on behalf on Mr Rossetti, Liberal Eastern Victoria MLC Edward O’Donohue said the removal of signage “appeared to be done in a co-ordinated way”.

Mr O’Donohue said the party had not been notified of signs being placed illegally.

Nationals candidate Danny O’Brien said the issue had become “a distraction from the real issues”.

“If you hadn’t put them up on the road reserve, which is illegal, VicRoads and others wouldn’t take them down,” he said.

“I’m 95 per cent confident that all of ours are on private land.”

State Nationals leader Peter Walsh said the timing of the claims showed “arrogance” from the Liberals.

“This wasn’t about one side or other pulling someone else’s signs down, it’s the fact they put signs up illegally,” he said. “They can’t cry foul over that.”

Mr O’Brien’s signs haven’t been immune from vandalism, with an image of his head cut out of a campaign sign at Dutson.

Mr O’Brien didn’t think it was politically motivated, suggesting it was “someone having a laugh”.

“It is common practice for VicRoads to remove illegal signage regardless of whether it is political or not,” he said.

“Under the Road Management Act it is prohibited to place signs in the road reserve of an arterial road without VicRoads’ consent.

“VicRoads aims to keep road signage to a minimum so road users are not distracted while driving.”

“In the past, council has purposely never adopted an active role in the removal of election signage on council managed property unless they are considered a risk to the public,” he said.

“In other words, for the brief few weeks leading up to federal or state elections, we have never taken a heavy-handed approach to election signage unless we believe they are in a dangerous location.

“Council staff recently removed one sign after a complaint from a resident as we agreed that it was in a potentially dangerous location. We will continue to be flexible for all candidates in both state and federal elections as we have always done in the past.”

Meanwhile, the Gippsland Times has been told of concerns about the use of recorded phone messages by the Liberals.

Residents have received recorded messages from Mr Rossetti. Putting voters offside, some of the calls have come at dinner time.

People have also been receiving “push polling” calls, with the promotion of a candidate disguised as a survey without indicating a political party was behind it.

While the parties are paying for the calls, the VEC reimburses the campaign costs of parties and candidates who received at least four per cent of the primary vote.

Political parties are exempt from the Do Not Call register.