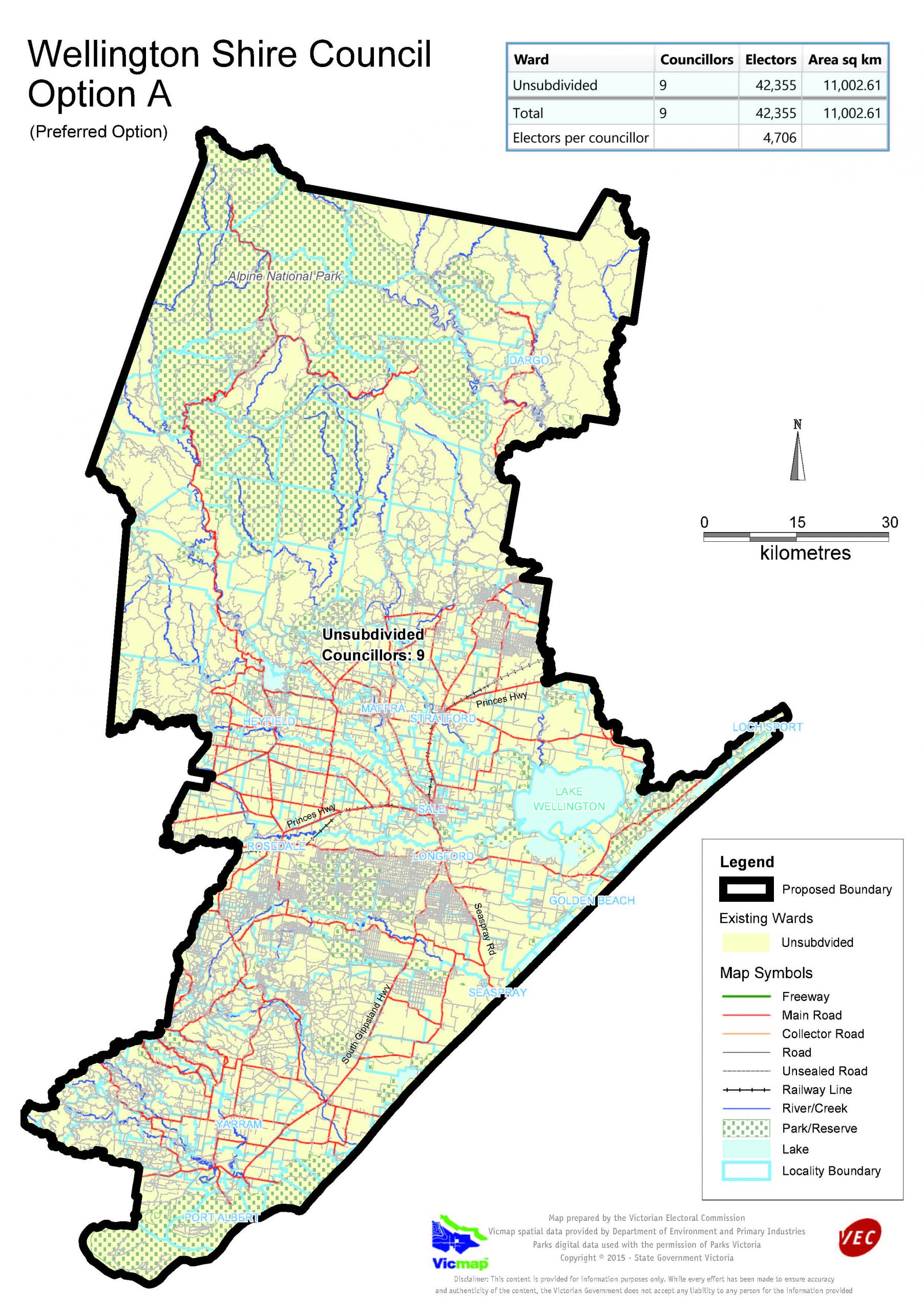 WELLINGTON Shire Council does not want to change the  way councillors are elected throwing its support to the retention of an unsubdivided municipality.

Council on Tuesday passed a motion to make a submission to the Victorian Electoral Commission in support of retaining the current structure.

The VEC is currently undertaking a review of Wellington’s voting structure ahead of next year’s council election.

After receiving 21 preliminary submissions, the VEC has put forward two options: retaining the current structure of nine councillors representing an unsubdivided municipality, or dividing the shire into three, three-councillor wards.

The second option would involve a northern ward stretching from Rosedale and Cowwarr to Dargo, and including Maffra and Stratford. Sale and Longford would form part of a central ward, while a southern ward would encompass the Wellington coast, Yarram and Gormandale.

The VEC is currently accepting more submissions as it compiles a final report, with Wellington Shire Council to voice its support the VEC’s preferred option of retaining the status quo.

In its preliminary report, the VEC stated voter intention was better reflected with the quota system currently used, allowing multiple candidates to be elected by voters, rather than resulting in ‘wasted votes’ in single-councillor ward contests.

Of the 21 preliminary submissions received, 17 favoured dividing the shire into single councillor wards or areas represented by multiple councillors. Some submitters, particularly from the south of the shire, believed this would ensure outlying areas were represented on council.

The most common subdivision model suggested was for seven wards, with three councillors for the Sale area and one each for the other six wards.

Among the issues highlighted by the VEC over this model was the large proportion of non-resident voters in a potential coastal ward leading to an insufficient field of local candidates.

The Seaspray Ratepayers and Progress Association stated that the 953 voters in Seaspray and The Honeysuckles felt left behind, claiming centres such as Sale, Heyfield, Maffra and Yarram received more input from councillors.

Four submissions from Port Albert argued separating the shire into wards would discourage the apparent favouritism of Sale, and bring the shire into line with other large, geographically diverse municipalities.

The VEC responded to these claims by pointing out only three of the current councillors live in Sale, while another is from nearby Longford.

The option of three wards is effectively a compromise between retaining the current structure and dividing the shire into nine or seven wards.

While acknowledging the strong local interest in having wards, the VEC reported there were constraints in introducing ward boundaries to a municipality with distinct natural environments and a population dispersed between an urban centre and rural townships.

It claimed an unsubdivided structure avoided the problems of ward boundaries dividing communities of interest and overcame the challenge of the non-resident owners of coastal properties which can’t be developed.

According to the VEC, the rate of predicted population growth did not justify the addition of more councillors.

Wellington Shire councillor Darren McCubbin claimed nine councillors representing the entire shire served the community better than having one each from particular wards.

“The fact that all ratepayers vote for you does focus the mind to consider the entire shire when making any decision,” he said.

“Therefore, I think having a ward structure actually limits the choice, limits the ability to have proper democracy.”

A three-ward structure, Cr McCubbin said, would lower the probability of getting the best nine candidates on council.

While one ward may have more than three strong candidates, Cr McCubbin said there may be a struggle in other wards to find suitable candidates.

“Having access to all the pool of ratepayers is actually an advantage. You get the best nine people for the region,” he said.

Having an unsubivided municipality allows people to vote for candidate based on common interests, rather than where they live, according to Cr McCubbin.

“(Councillors representing wards) are elected by their small community and they have pressure on them to vote specifically for that community. I think a lot of those decisions end up being much more short-term than they should be,” he said.

Submissions for the VEC preliminary report close this Wednesday (October 15) with a public hearing to be held on Wednesday, October 21 at the Port of Sale Business Centre.

A final report is due November 11 with any changes put forward to come into affect for the next election in October 2016.