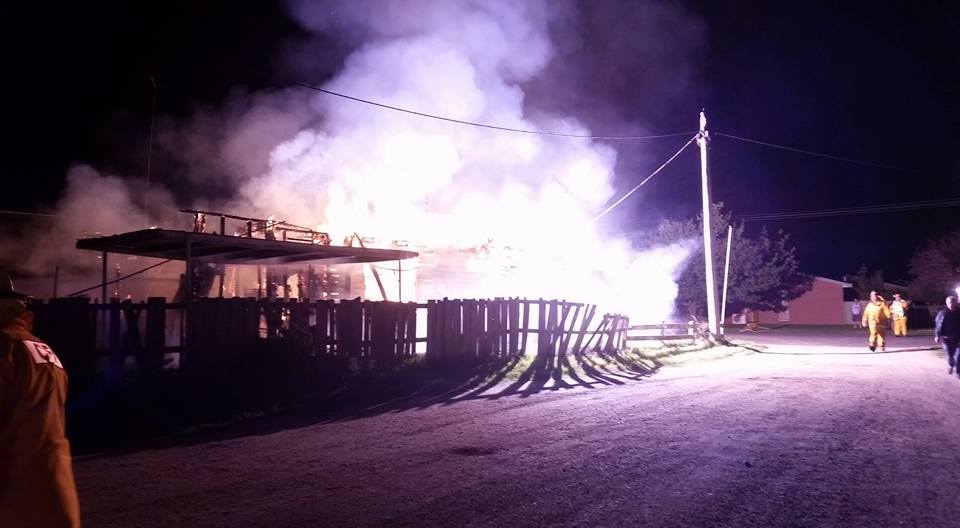 POLICE are treating a fire at the former Heyfield petrol station on Good Friday as suspicious.

CFA crews from Heyfield, Seaton and Winnindoo were called to a blaze in Pearson St about 8.40pm.

Firefighters could see the glow from the fire and called for extra trucks from Maffra and Tinamba as well as a power company.

Police said the property had been converted into a residential property but no one was home at the time.

“The heat was very intense and flames were burning on the house next door, and people were blocking the road watching the fire,” Mr Bennett said.

“A Heyfield pumper with a crew of two arrived on scene and they quickly got water onto the side of the old service station where the flames were burning the house and stopped it from catching on fire.

“It was a fantastic effort by the crew under extreme stress, thick black smoke and heat.”

A Heyfield tanker and crew arrived and set up immediately, helping to stop the fire spreading to adjoining shops and yards.

There were fears the building could collapse onto the house next door because of the fire’s intensity, preventing crews from attacking it from within.

About 40 CFA members were on the scene at the height of the fire to stop it spreading to adjoining buildings.

“Heyfield captain Phillip Graham worked extremely hard with his breathing apparatus crews to stop the spread of the fire and to contain it to just the old service station,” Mr Bennett said.

“Inside the service station were very old cars, tractors and a vintage steam roller.”

It took about one hour to bring the fire under control and another three hours to extinguish the smouldering building completely.

The property was destroyed and about 10 metres of weatherboards and roofing on the house next door were scorched.

Mr Bennett said he was proud of the local firefighters.

“They had had a very hard fight and had lost some history in the town, but if it was not for all those who worked extremely hard, they could have lost even more,” he said.