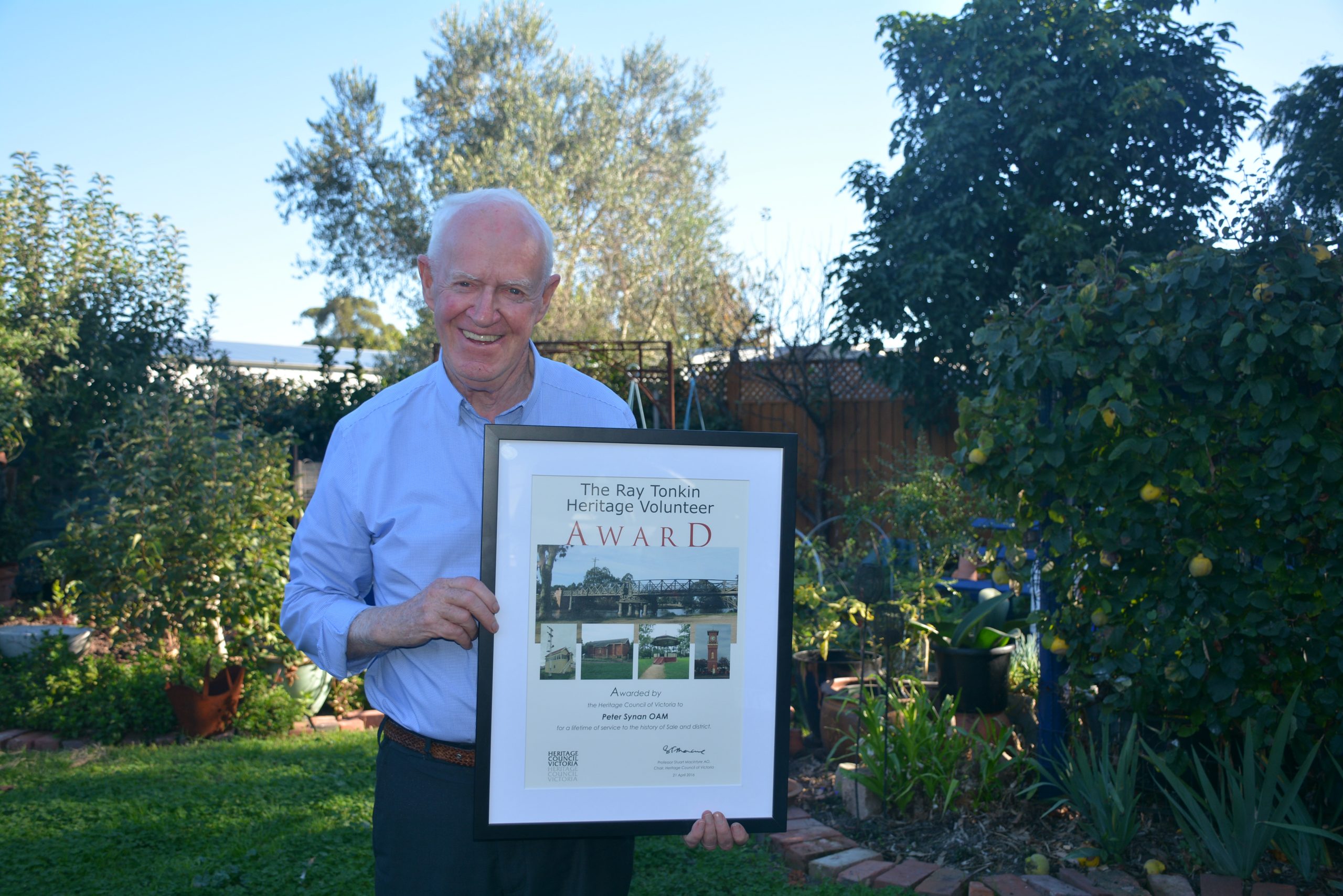 THE presentation of the Ray Tonkin Volunteer of the Year award by Heritage Victoria to Peter Synan for his lifetime of service came as a complete surprise to the Sale historian.

“I was unaware of any such award until (last)  Thursday night; I thought I was going down for a lecture,” he said.

Mr Synan, a former history teacher at Sale High School, was also City of Sale mayor in the 1970s and 1980s.

He has always had a passion for local history, relishing the opportunity to delve deeper and shine a light on the unexpected.

He has written more than a dozen books, on topics as varied as the history of Sale’s shipping businesses, to, most recently, a history of St Patrick’s College in Sale.

His efforts have led to a deeper understanding of the area by locals and has led to finding new uses for spaces, which he said should be a priority.

“The Swing Bridge is a favourite of mine; I was mayor of Sale for the centenary in 1983,” he said.

“I’ve made a study of swing bridges in Australia, and to a limited extent around the world, and I’ve made a special effort, without great success, to have it listed on the National Heritage List, through the Shire of Wellington.

“So far it hasn’t got up, but time is on its side.

“It’s a brilliant design, so simple but so brilliant.”

The powder magazine was originally built in the 1860s to provide a space to store gunpowder and explosives during Gippsland’s gold rush, at a safe location far enough away from town to prevent disaster.

“The government felt it would be unsafe and unwise to allow the shopkeepers of the day to stockpile a lot of powder in the middle of town,” he said wryly.

As well as the original floorboards, which he said was a genuine surprise, inside the magazine is a small museum, dedicated to the gold rush.

He still visits as often as he can.

However, Mr Synan said he did have some regrets, including the loss of Sale’s Prince Regent Theatre on Cunninghame St, which was demolished in 1973.

“That was a picture palace,” he said.

“It was just to the east of the Commonwealth Bank near the clocktower; there’s a Specsavers there now.

“It was a remarkable building, too big and too handsome for Sale of 1926 when it was built.

“It got sort of tricky with the drive-in theatre — that sort of killed it.”

The Sale Gaol, which was once the first thing people saw when they entered town, was also something Mr Synan tried to save, but he was still pleased with the results, which have been nominated for an Australian architecture award.

While Mr Synan is focused on the past, he has some excellent plans for the future.

With the volunteer award came a prize of $2000, which must be used for something heritage-related, with approval from Heritage Victoria.

“I would put it in the brick water tower in Victoria Park,” he said.

“The brick water tower is quite beautiful, if you get the rampant ivy off it.”

While he’s never been inside, Mr Synan is  curious about the tower, one of the only brick water towers in Gippsland.

He proposed that the $2000 be used as a seeding grant for the revitalisation and renovations for an  exhibition space inside the tower.

The water tower was designed by the same architect who designed the Swing Bridge, the internationally-renowned engineer John Granger, and the Sale Historical Society still holds some of his original drawings.

“I know that we have enough material to make it a very interesting place,” Mr Synan said.

“I think Gippsland Water would get behind it as well.

20/09/2021
THE last domino in Gippsland football and netball fell last week, with the Gippsland League officially calling time on the 2021 season. The league and...