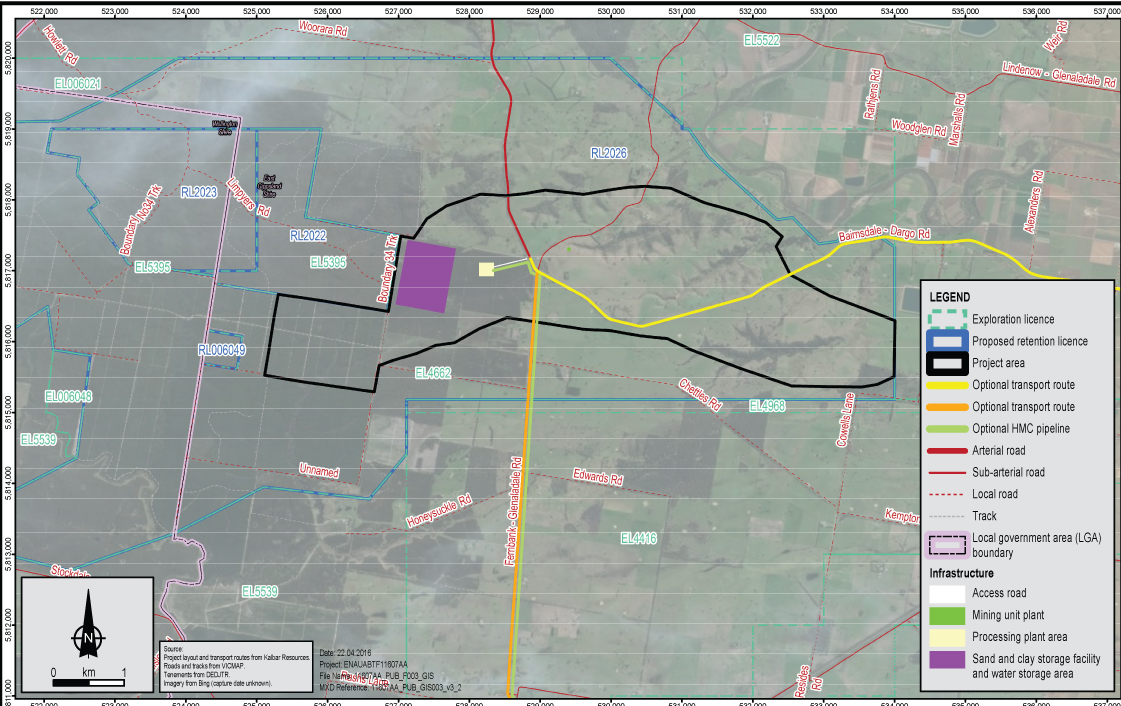 COMMUNITY feedback is being sought on a proposed sand mine near Glenaladale that could result in significant numbers of heavy trucks transporting mineral sands through Stratford, Sale and Yarram to Port Anthony near Barry Beach.

Kalbar Resources is seeking exploration licences for The Fingerboards Mineral Sands Project which will produce titanium and zircon.

If approved, the proposed mine will be built at an area known as The Fingerboards, located at the crossroads of Bairnsdale-Dargo Rd and Fernbank-Glenaladale Rd, east of Lindenow, between Stratford and Bairnsdale.

Kalbar Resources chairman Rob Bishop said the site had been explored during the past 12 years and a good deposit of mineral sands had been found.

“We want to mine mineral sands which contain a combination of titanium and zircon. It is a commodity that is highly valued,” he said.

“We’re looking to mine that and sell it on the global market.”

The heavy mineral concentrate would be transported from the mine site to Port Anthony in south Gippsland, and possibly Melbourne, then be shipped and processed at mills in Asia for ceramics, refractory, foundry, mobile phone and laptop batteries, paint, plastic and paper.

Mr Bishop said the operation would directly employ about 110 people and the project would have revenues of about $150 million per year.

Minefree Glenaladale, a group opposing the project, was launched after community meetings were held in 2014.

Lyn Johnston, a Minefree Glenaladale representative, said they weren’t against mining, but felt this project was in an inappropriate environment which could have long term irreversible consequences.

Ms Johnston said the group also had concerns about noise and increased volumes of traffic from the mine site to south Gippsland.

She said they were also concerned about the impacts airborne dust containing silica and radioactive monazite could have on residents, animal pastures, household tank water supplies and wool and fibre production.

Mr Bishop said the project was at predevelopment stage, and would need to meet a range of criteria, including an Environmental Effects Statement, before it could be approved.

An EES usually contains information about how the existing environment may be affected and proposes measures to minimise or manage environmental effects, while taking into consideration public and stakeholder consultation.

The EES will be used by the relevant ministers, local government and statutory authorities in making a decision on approving the project.

Mr Bishop said there were three different truck routes the company could use, or there was the possibility of using a pipe system.

He said dust would be the focus of ongoing work through the EES process.

“We can engineer the project so there is no risk of monazite dust,” he said.

“We think we can manage dust using best practice techniques, which may include curtailing activities on windy days.

“Silica is something that will be monitored, and we will have to comply to very strict limits, much stricter than the agriculture industry.”

Carolyn Cameron, a Minefree Glenaladale representative and a Fernbank resident who lives a few kilometres from the proposed mine site, said she was also concerned about the potential environmental effects, noise and the visual aesthetics of the infrastructure.

Ms Cameron said her family bought the property a few years ago to enjoy the rural lifestyle.

“We don’t want to live with continual noise,” she said.

Ms Cameron said she was also concerned about the mine’s water consumption, which Mr Bishop estimated would be about two to three gigalitres per year.

Mr Bishop said the project was subject to change, based on the outcomes of the EES and other studies, and feedback from the community. If approved, the project would most likely launch in 2019.