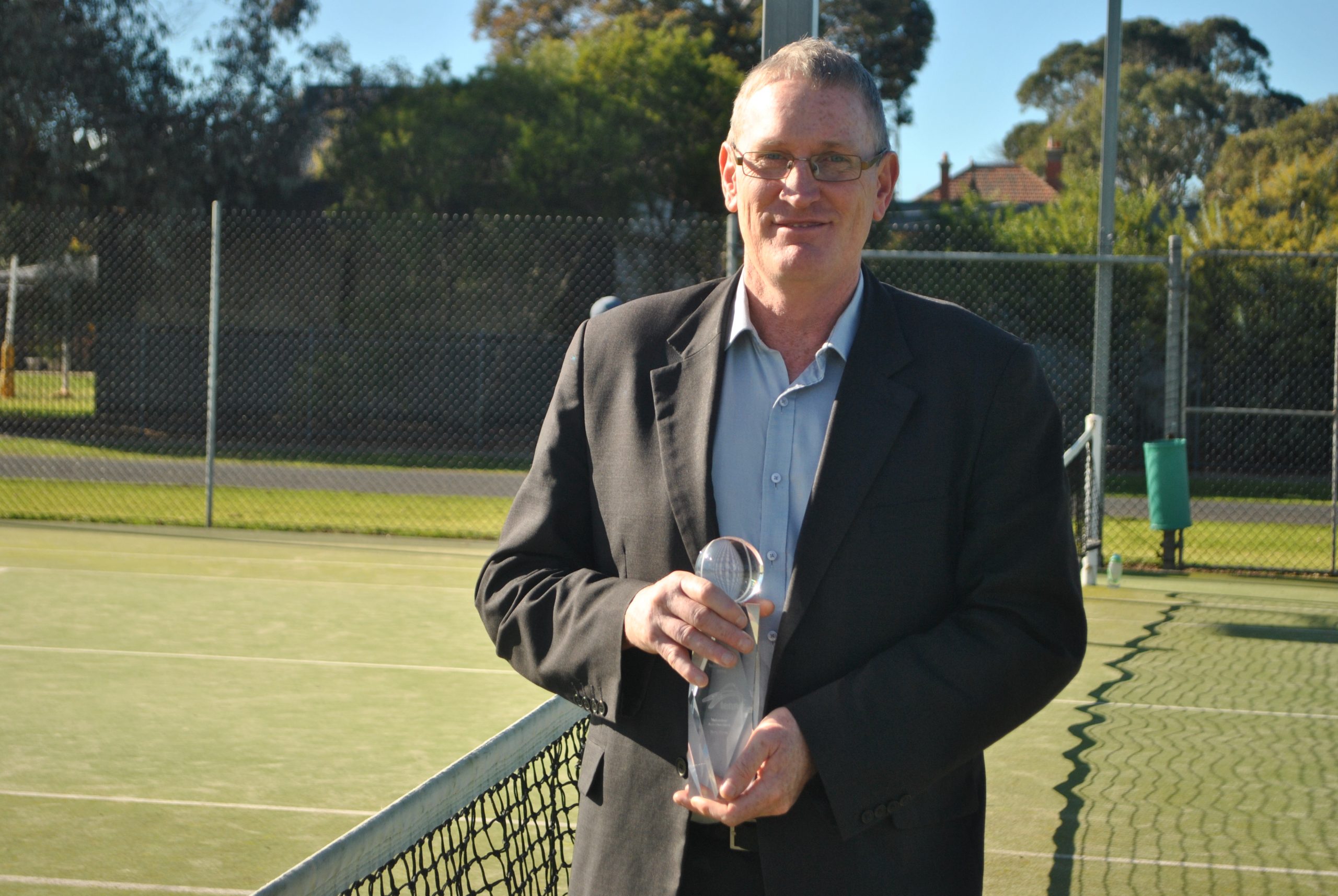 The award was presented to Mr Flynn by 2000 Olympic gold medallist Cathy Freeman during the ceremony at the Melbourne Cricket Ground, attended by 400 people.

Mr Flynn began at the Maffra Lawn Tennis Club as junior co-ordinator when he noticed some assistance could be provided, and eventually stepped into the club presidency role two years ago.

“My daughter, Zara, came to play tennis, and I just followed her, so I’ve been involved one way or another for around five years,” he said.

“You need someone in this sort of organisation that’s passionate about making sure that things happen, and (with Terry) they do happen.

“There’s a whole lot of people who do a lot of work, but you do need someone who drives major projects, so it’s terrific to see.”

In his time as president, Mr Flynn has fostered Maffra’s renowned Easter tournament to attract more sponsorship and awareness in its 90th year. In doing so, he has increased the prize money on offer, and expanded 2016’s entries by 20 per cent, with the maximum capacity of 275 players competing across the events filled easily.

Mr Flynn also orchestrated a dinner in celebration of the tournament’s 90th anniversary, and organised the return of retired champion Frank Sedgman to the club, after he opened the courts in 1949.

“Terry organised the entire dinner, that was a lot of work by himself,” Mr Runciman said.

Under Mr Flynn’s leadership, the club has grown its membership by more than 32 per cent in the last year.

“It’s the only lawn tennis club in Gippsland, which makes it pretty special,” he said.

“If people appreciate the club, and want to also contribute and be a part of it, that’s what’s most satisfying.”

Mr Flynn used the opportunity to show concern at a lack of junior players coming through the club.

“Juniors is a real challenge, there’s so much competition around for the kids — it’s starting to struggle a bit, so we’ve got to find a way to make tennis more interesting and appealing to them.”

Mr Flynn emphasised he was one of many volunteers who deserved the award, and the only difference between them was he “got lucky”.

“There are people here who do more than me, so it’s a little bit ridiculous,” he said.

“Tennis Victoria has been hugely helpful, and the council also give us a lot of help.”

His love of sport volunteering does not just extend to tennis, with his consistent contribution to football, previously chairing the Gippsland League board, and being a member of Maffra Football-Netball Club’s committee.

When asked if he will be playing summer pennant this year, he responded modestly.

“I’m hopeless. I’ll be playing, but I’ve peaked at hopeless.”