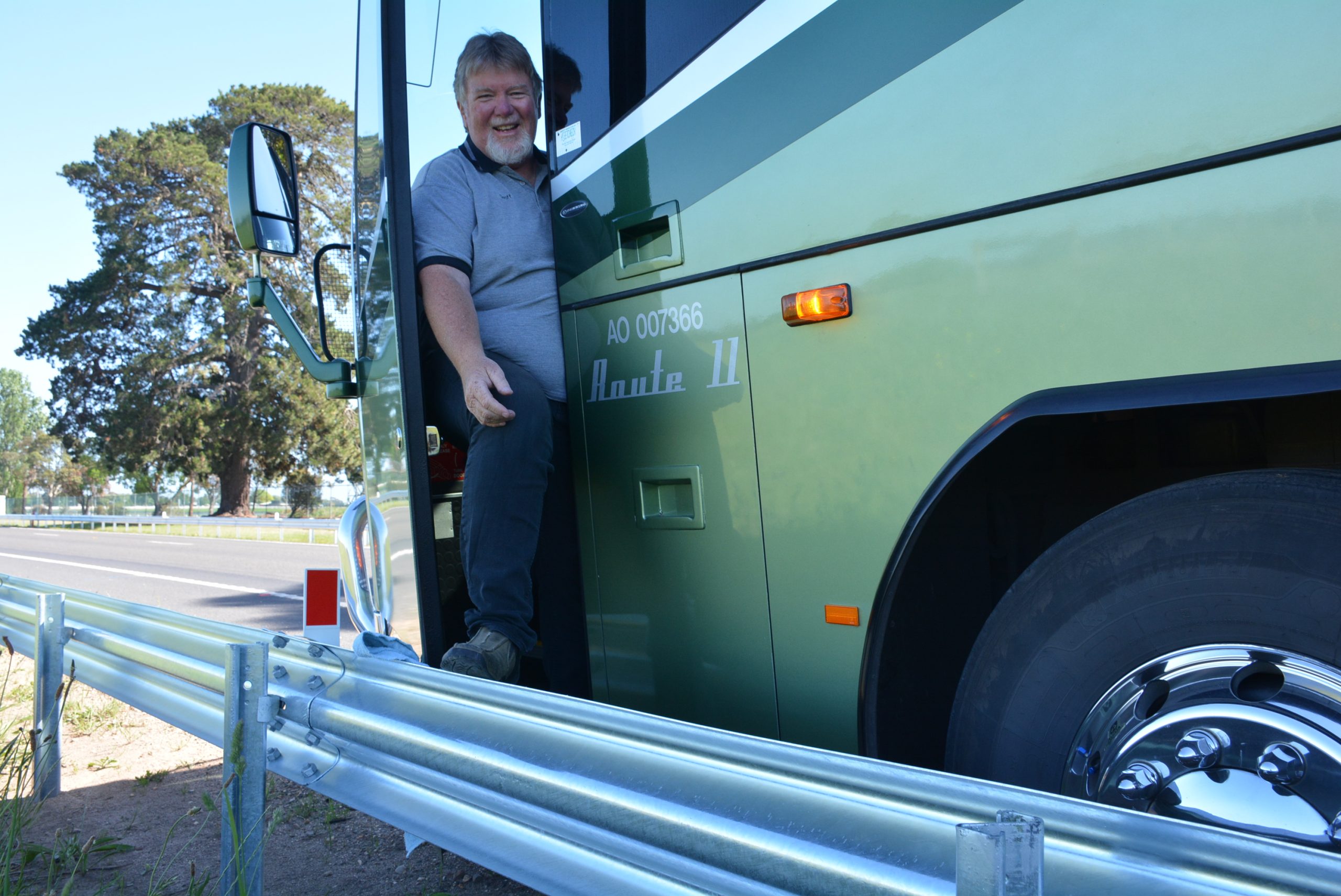 RECENTLY installed barriers along the Sale-Maffra Rd are too close to the road for some bus drivers to open their doors in an emergency.

School bus driver Geoff Higgins said while there are four metre runout gaps spaced every 270 metres along the road, for most of the road there is just three metres between the Armco barrier and the traffic, which VicRoads attributed to the layout of the road.

In case of a fire or tyre blowout, Mr Higgins is concerned the students on his bus would not be able to evacuate safely.

“(Breaking windows) is an option, but if you’re in trouble, I would have to park at least a metre on the road, in the traffic, open the door properly, but then the kids have to jump over the guard rails themselves I have primary school children, and some of them are not much taller than the Armco, so that produces another problem,” he said.

“I wasn’t consulted at all, I don’t think anyone was the bus co-ordinator was approached by them, but everything she suggested was kind of modified or watered down.”

Sale College bus co-ordinator Beth Lanigan said there were three bus stops on the Sale-Maffra Rd, and about six school buses used it every day.

“That’s our concern, if there was an emergency, we wouldn’t be able to get the kids off safely,” she said.

“If it happens in the bits where they’ve made it wider, it’d be okay, but it doesn’t always happen.”

The school had been consulted, she said, and construction workers had been helpful in putting in as many wider access breaks as possible.

“That’s why they’ve done some of the wider bits, because I said it would be a problem the construction guys were great, they’ve left it wide in as many places as they can,” she said.

Mr Higgins added interacting with Armco barriers was not part of his safety training regime.

“I’m particularly peeved because of our accreditation — we have a safety process we have to do through Monash University, and the government seems at odds with they’re telling us what to do,” he said.

“They want us to be extremely safe, which we are, and they’ve got this program with the barriers, they seem to not care.”

VicRoad’s Eastern Regional Alliance program manager, Michael Flegg, said the improvements underway would transform the Sale-Maffra Rd from one of Victoria’s riskiest roads to one of the safest.

“VicRoads has met with Sale College to discuss access needs for the informal bus stop areas along the route and, where possible, we have maximised the distance from the edge of the traffic lane and the barrier,” he said.

“We’ll continue to work with the college to understand how we can assist with enhancing safety further.”

The Maffra-Sale Rd has experienced 26 casualty crashes in total involving 54 people over the past 10 years, with one crash resulting in a life lost, and 14 serious injury crashes in which 21 people received permanent life-changing injuries.

Federal Infrastructure Minister and Gippsland MHR Darren Chester said he had written to VicRoads and the state roads minister on behalf of people who had concerns about the safety upgrades.

“(The upgrades) are already used to successfully reduce trauma, but there have to be considerations to make sure emergency services have good access in event of a natural disaster or traffic accident,” he said.

“It’s up to VicRoads and the TAC to properly explain how they’ll overcome those concerns.”