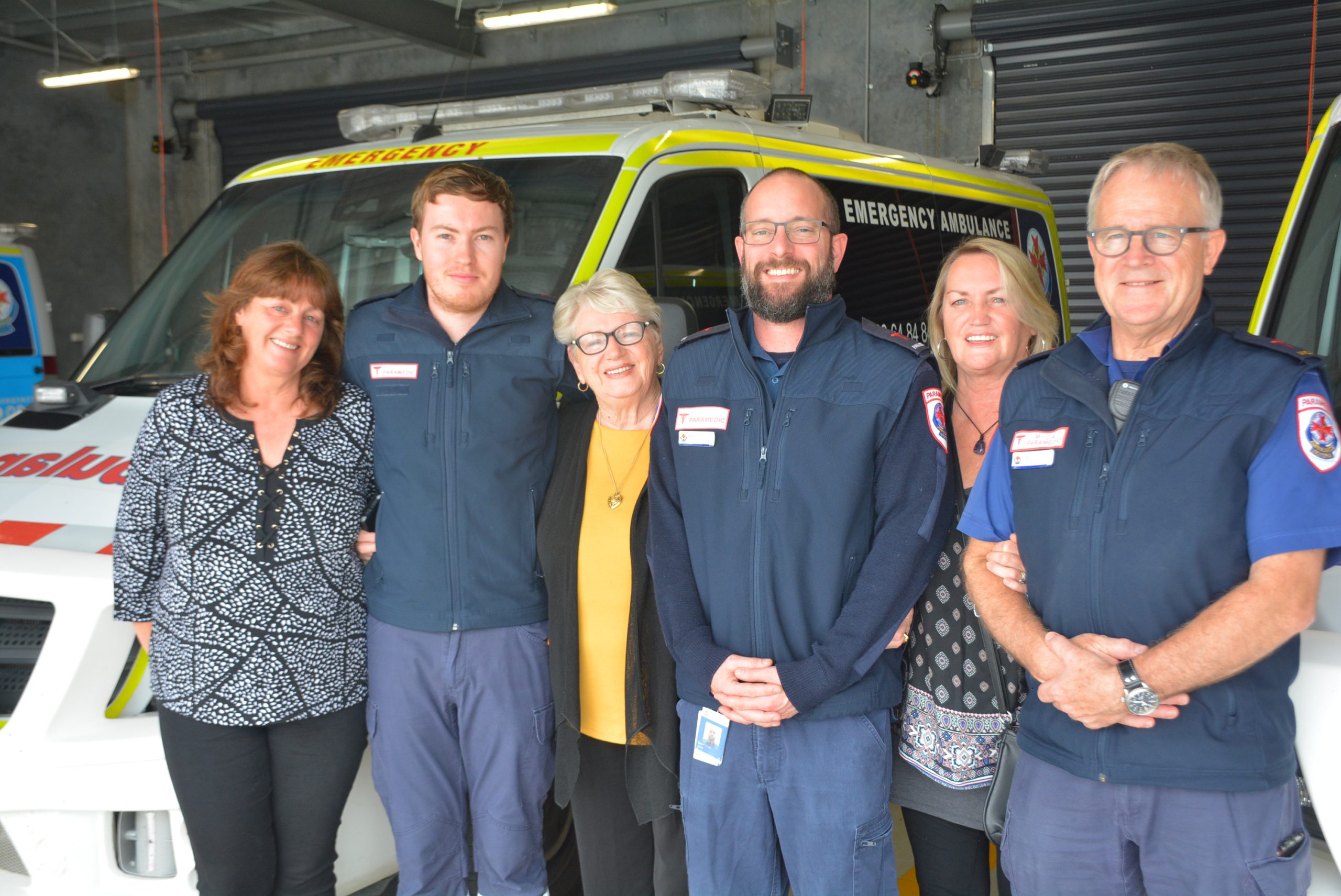 WHEN Sale Ambulance Auxiliary president Yvonne Clavarino began to fell clammy and unwell while visiting a friend on September 11, she thought she was coming down with the flu.

But it soon became clear she was having a heart attack.

Yvonne would not be alive today if it had not been for quick action of paramedics, and she recently called by Sale Ambulance station to personally thank them with a sponge cake for morning tea.

“I was at a friend’s place when I began to get clammy and the collywobbles, and I thought I was getting a flu-type thing,” Yvonne recalled.

She decided to drive home, and it was near her house that it hit her.

“I thought, am I going to make it home or not?” Yvonne said.

“It was like nothing that had ever happened before.”

Already having had four heart stents, when she got home she lay down on her bed after administering a Nitrolingual pump spray which widens blood vessels, but the pain worsened.

“It was quite surreal,” she said.

“It was like it was happening to someone else.” Paramedics Dan Fleming and Ben Patrick were there in 10 minutes.

“I knew I was in trouble and I was absolutely terrified,” she said.

“But I felt very reassured when the paramedics started work.

“Ben said ‘It’s our Yvonne!’ — she helps raise money for the things we need.”

After consultation by phone with a Melbourne cardiologist, it was decided to fly Yvonne to Melbourne.

The following day she was in surgery receiving two new stents.

Yvonne has no doubt the actions of paramedics is the reason she is here today.

Alfred Hospital cardiologist Dr Dion Stub, who treated Yvonne, told her the fact that the thrombolytic drug was administered so quickly saved her.

She said Dr Stub was particularly interested in how the chain of events had unfolded, as he had written the ambulance protocol for the delivery of the drug, and it was the first patient he had seen in such a short space of time after receiving it.

“When you go back, you buy those guys a big block of chocolate,” Yvonne said he advised her.

“Well, they got a passionfruit sponge instead,” she laughed.

Yvonne said she was extremely grateful for the care she received.

“We are so lucky we have these services on our doorstep,” she said.

Yvonne said her experience also highlighted the importance of having ambulance membership — if not for that she would be facing a bill of $1800 for the short road ambulance trip to meet the helicopter, and another $11,500 for the chopper flight to Melbourne.

She described ambulance subscriptions as “the cheapest insurance anybody will ever buy”.

“It’s just essential, no matter what age you are.”

Ambulance Victoria membership costs just $47.15 for a single and $94.35 for families, and covers the costs of ambulance travel.

“Yvonne is a much-loved member of our Sale Ambulance Auxiliary and it’s wonderful to hear that she has had such a good outcome, thanks to the great work of our highly skilled paramedics and the hospital staff who treated her,” he said.

“We wish her well in her recovery.”

Terry Chessells also reiterated the importance of being an ambulance Victoria member, saying it was “obviously much cheaper than home or car insurance”.

Yvonne also encouraged people to join Sale Ambulance Auxiliary, which helps raise money for extra equipment for paramedics not funded by the government.

She has been part of the Sale ambulance auxiliary for the past six years, and now considers it virtually an extended family.

“We raise funds to purchase important tools and resources for our paramedics.

“I can’t thank them enough for what they did — if wasn’t for them I wouldn’t be standing here,” she said.

To sign up for Ambulance Victoria membership, visit www.ambulance.vic.gov.au/membership or phone 1800 648 484.