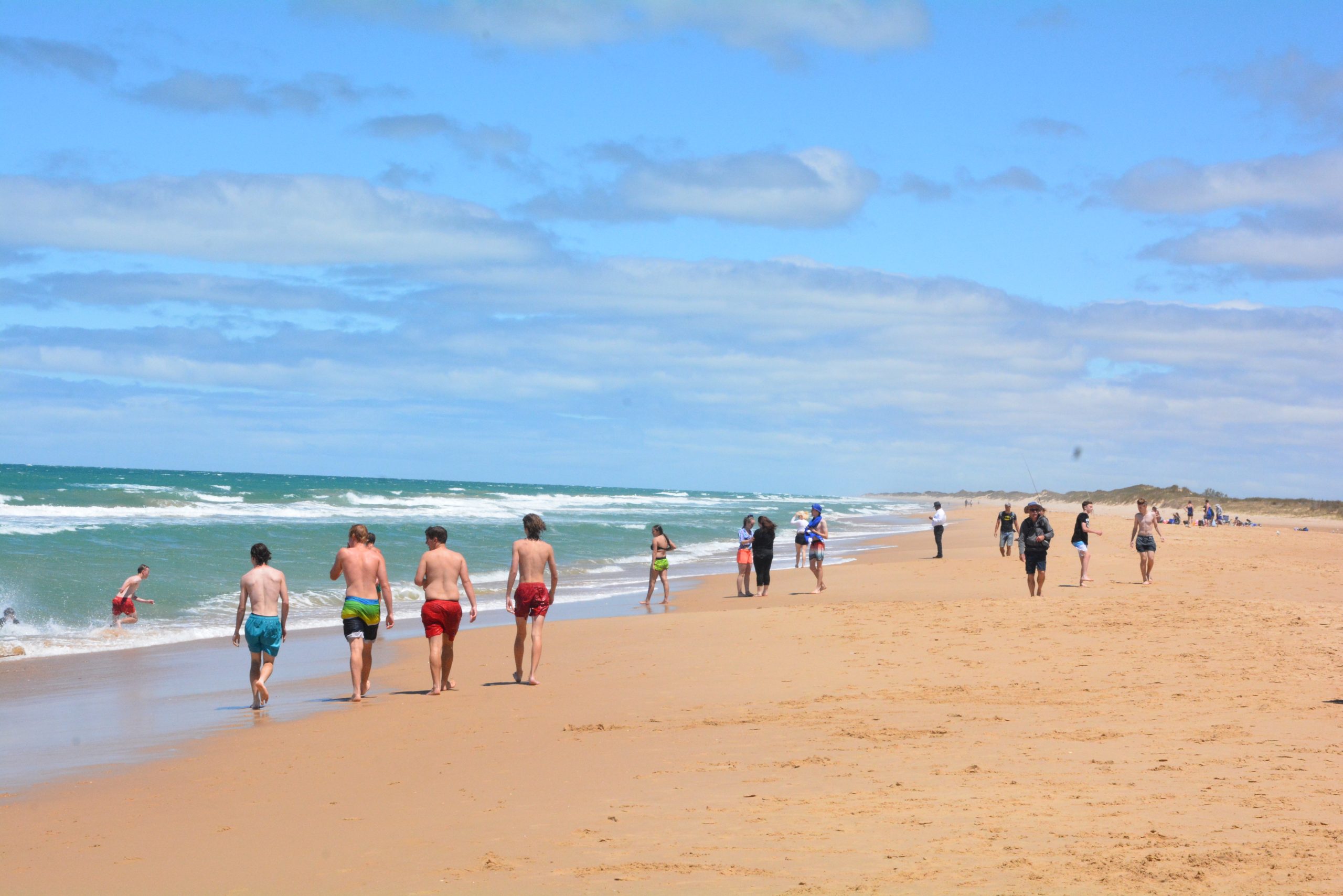 Seaspray Caravan Park manager Kim Courtney said bookings were flooding in, and she was excited for summer.

“There’s no availability from Boxing Day to New Year, and there are lots more bookings coming through for after that in the lead up to Australia Day,” she said.

Many visitors came from the eastern suburbs of Melbourne seeking sun and sand, but Ms Courtney said increasingly, people were making the trek from the other side of Melbourne for a more laid-back holiday experience.

“People can still fish — kids can ride their bikes.

“And it’s got me — what more could you want?” she laughed.

Overseas travellers from Holland, Denmark, Sweden, the United Kingdom, France “and all over” also regularly stop at the caravan park, many having done their online research to find the perfect spot.

“They get on sites like WikiCamps and see it’s clean, it’s new, it’s happy and relaxed,” Ms Courtney said.

“They can also head up to the surf club for a meal.”

Sale can be a launching point to many of the local area’s attractions, and Mansi on Raymond, Sale, general manager Jeremy Green also said business was “booming”.

“The ongoing works at the RAAF base, development at the prison and the oil and gas industries are keeping us full during the week,” he said.

“We are also seeing increased bookings over the weekends, with more tourists choosing to come and see the natural attractions of Gippsland.

“These tourists range from domestic travellers just coming for a day or two to international travellers staying for longer.”

Mr Green said natural attractions such as the Sale Common Boardwalk, 90 Mile Beach and the abundance of walking and push bike riding tracks were always winners.

“There is also a large group of people who enjoy the historical and man made features of the area such as the Port of Sale development and the Swing Bridge,” he added.

“Then there are those who are coming for events, be it sporting or cultural, such as the shows at The Wedge or the Stratford Courthouse Theatre.

“We always get positive feedback from the Rubeena Port of Sale Heritage Cruise.

“Guided tours such as this are always a winner,” Mr Green said.

“The first class food and wine offering we have in the region is also frequently mentioned.

“There are not many areas you can go that have such a large range of fantastic local food and wine available.”

He said many visitors were domestic travellers staying a night or two, many from Melbourne.

“There are also more international tourists choosing to stop over in our region from Europe and Asia.

“More and more in general are also taking the Sydney to Melbourne coastal route.”

“Some have come here to work and are now re-visiting with family to experience the tourist side of the area, while others are drawn to the area by family or events,” he said.

Rebecca Bingham, who co-owns the Port Albert Motel with her husband Jason, said she had also been busy “particularly since September”.

“And it is continuing to build as we head into peak Christmas-summer season,” she said.

The main drawcards continued to be natural attractions such as Corner Inlet and Nooramunga Marine and Coastal Park, Tarra Bulga National Park, the 90 Mile Beach and walking and shared use trails.

“People are attracted to these areas for a variety of reasons including photography, nature appreciation, a relaxing break from busy lives, bike riding, bushwalking, boating and fishing,” she said.

She said guests were also impressed by local food and wine, art and antiques.

Ms Bingham said most of her customers were from Victoria, particularly Melbourne, but there were also many interstate and international visitors, including many travelling along the Sydney-Melbourne touring route.

“We also have a lot of people travelling from within the Gippsland area to spend some time in Port Albert to just relax and get away from it all,” she added.

“The majority of our customers are couples, however it is also popular with families and singles either on holidays or for business.”