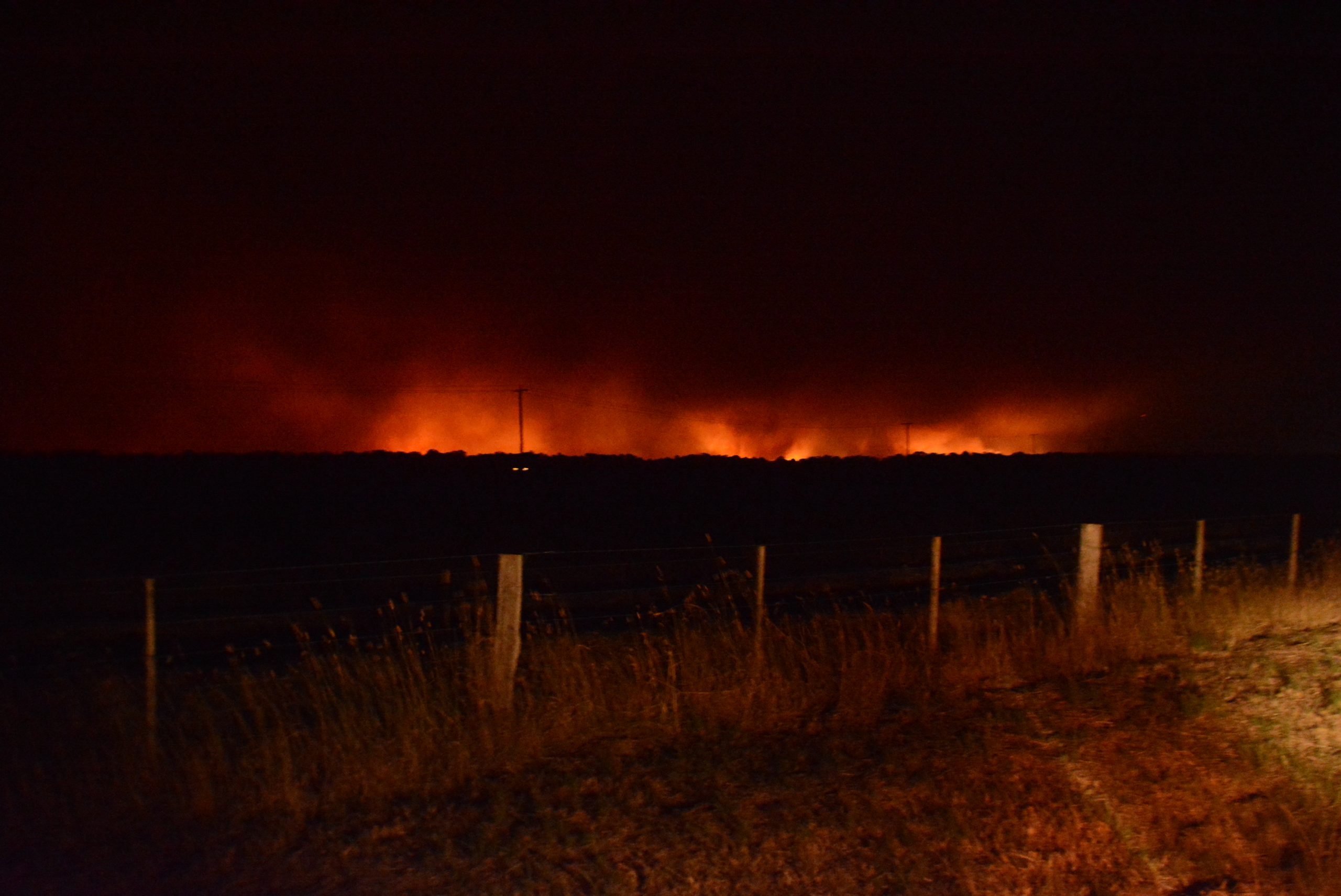 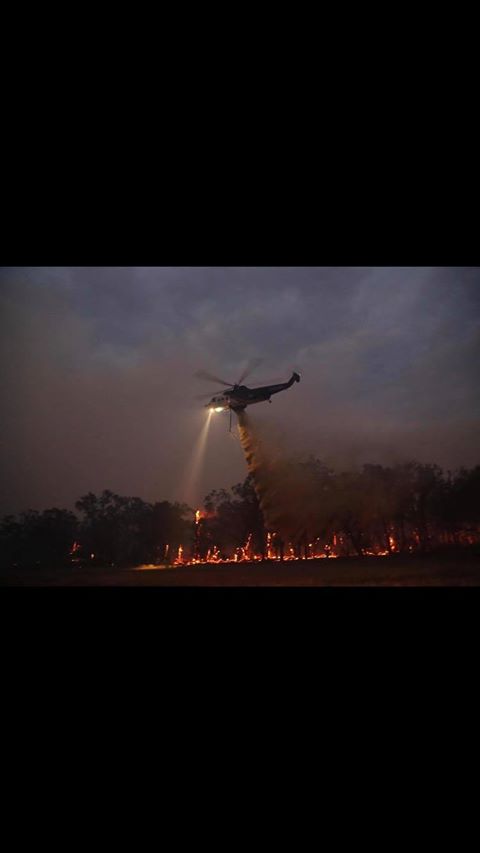 A HUGE bushfire, which has been raging between Longford and Rosedale since Friday, could burn for up to two to three weeks.

At the time the Gippsland Times went to print on Monday, the fire had burnt through 11,530 hectares and was yet to be declared under control, but no lives or homes had been lost.

The blaze is being investigated by the Victoria Police Arson Squad, with suspicions it may have been deliberately lit.

Sparking 6.3 kilometres south of Rosedale, the fire has chewed through a significant proportion of Holey Plains National Park, as well as about 2000 hectares of pine plantation.

The perfect storm of temperatures soaring past 40 degrees, a 10 per cent humidity level, strong wind gusts up to 60 kilometres per hour and instability in the atmosphere combined to allow the fire to push up a towering plume and generate its on wind on the ground.

The fire was reported to Sale CFA about 1pm on Friday, but by 2pm, local CFA units gauged it would be difficult to fight because of access and size, and it was handed over to the state’s Incident Management Team.

About 160 people were deployed on the ground fighting the fire, while 11 aircraft — including large air tankers and helicopters — attempted to control the fire by air.

Initially, the fire was pushed by winds in a south-easterly direction toward Stradbroke West, burning through about 900 hectares, until a cool change swept through about 7pm.

Fanned by the change’s strong gusts of south-westerly wind, the fire front was propelled north-east, and burnt through about 9100ha as it pushed toward Sale, Longford, Fulham, Kilmany and Pearsondale.

Emergency Management Commissioner Andrew Crisp reported three fire crews — one CFA crew and two from Fire Management Victoria — were forced to protect themselves when the fire doubled back.

“The positive out of this is that all those firefighters are safe and well, and they’re being very well supported by their respective organisations,” he said. There is a review into the matter.

Crews worked overnight, trying to hold the fire at the Rosedale-Longford Rd, but were provided with some relief when winds abated about 2am.

In an Australian first, night fire bombing was deployed, with two night fire suppression helicopters from Ballarat and Mangalore operating from 9pm until about 2.30am.

An emergency relief centre was established at Sale Baptist Church, registering 51 people and housing 21 people for the night, while Sale Agricultural Society opened up Sale Showgrounds to house large animals, such as horses — both since have closed.

While Animal Aid and Fulham Correctional Centre were not evacuated, both had plans in place.

The blaze came dangerously close to destroying the recently updated Sale Field and Game clubrooms, just off Chessum Rd in Longford, and while the surrounding bush is completely burnt out, the club’s buildings and infrastructure remain unscathed.

Incident Controller Peter West said the focus for firefighters was on getting a good containment line around the active edge of the fire.

On Saturday, Hancock’s Plantation crews managed to track the whole fire edge on the eastern side, and, as of yesterday morning, firefighters were working on the fire’s southern edge, north of Merrimans Creek.

“We are looking at our next significant weather day being Sunday or Monday of next week,” Mr West said.

“We’ll get that combination of hot weather and winds, and that will really test all the work we’ve done.

“We are focused at the moment on doing everything we can to contain this fire and prepare ourselves for the next round of hot weather, but at the moment, fire activity is relatively benign.”

This week’s milder weather will give people living near the fire an opportunity to prepare properties and refine fire plans.

“Obviously, with a fire this size, we’re really worried about the wildlife in the area — there’s a lot of native forest — so we’ve got significant numbers of wildlife officers tasked to the fire today who’ll be walking through the area, looking for any injured or stressed wildlife and working with our wildlife shelters about what we can do for those animals.”

Mr West said fighting the fire would be a marathon, not a sprint.

“As an incident management team, we’re basically taking a deep breath and settling in for the long haul,” he said.

“We’ll obviously have crews coming in from around the state to help out here — they’ll be housed locally.

“We’ll be here for two, maybe three weeks — this is a big job, and you’ve got to put the effort in.

The Rosedale fire was one of 107 bush and scrub fires that sparked across the state on Friday.

A community meeting to brief residents will be held on Tuesday night at Longford Hall from 7pm.

The CFA education bus will be based at the Longford Hall for the duration of the fire.

Conditions can change rapidly, so people are encouraged to stay informed by visiting www.emergency.vic.gov.au, phone the VicEmergency Hotline on 1800 226 226, use the VicEmergency app, use Facebook or Twitter (#vicfires), or tune in to ABC local radio, commercial and designated community radio stations.