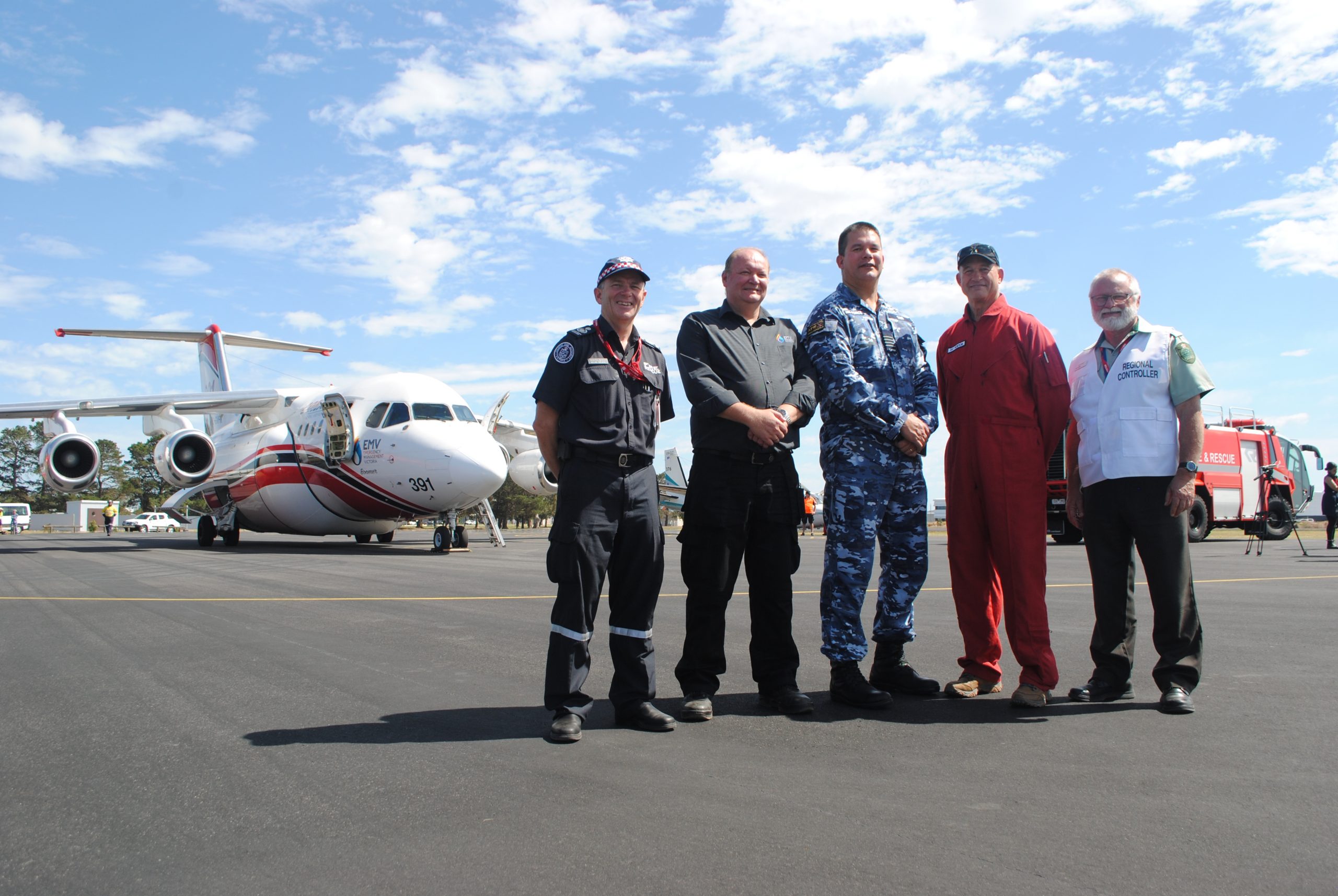 ONE of the state’s two large air tankers is now based at RAAF Base, East Sale, to help combat the now under control Rosedale bushfire.

The shift means the aircraft now has a reduced turnaround time, allowing it to drop its 11,500 litres of water or retardant on the Rosedale bushfire within 20 minutes — 40 minutes faster than when it was based in Avalon.

The agreement with the RAAF base will be ongoing — not just for the duration of the Rosedale bushfire, but for any fire that should spark across Eastern Victoria.

Emergency Management Victoria manager of aviation and regional operations Greg Murphy said the decision to base the plane out of East Sale was made well before the Rosedale fire sparked.

“We looked on the weather conditions for Gippsland on the back of two very dry summers, and worked very hard with the EMA and the Australian Defence Force,” he said.

We had the planning in place before these aircraft arrived, and looking at the potential spread of this fire, we made the decision to open the place to provide the support to the incident, and also any new starts that might occur that would require the assistance of these strategic aircraft.”

Senior ADF officer Group Captain Dennis Tan said the RAAF base was only too happy to help.

“The Rosedale fire is obviously local to our area, and being only about 20 kilometres away from the base means that we’ve got some skin in the game, because we’re a resident of this community as well,” he said.

“From a local point of view, defence’s involvement means that we’ve got a lot of assets and equipment here that could be of assistance, so we’re happy to help in ways that we can.”

“I think the way that Defence or any organisation needs to think these days is that we really have to operate as a whole community and a whole of government operation.

“For us to work with all these other agencies, it’s exciting, it’s interesting and it’s the way we really need to operate into the future, so we’re happy to have been able to assist in this effort at Rosedale.”

“We’ve got a number of resources out there, and we’re continuing to focus really strongly on consolidation of those control lines, and we’ll be doing that for the next week or so,” Mr Rankin said, adding he predicted increased smoke in the warmer weather.

Mr Rankin said he was “quite confident” the Incident Management Team would be able to hold containment lines.

“The IMT is prioritising their work around the fire, looking at where is the highest risk of escape, and that’s where they’re putting their resources,” he said.

He added spot fires and embers posed an ongoing concern, and the team remained on a high level, ready for warmer days.

“The grass and forest in Gippsland is very, very dry,” he said.

“We’re in multiple years now of lower than average rainfall, quite a significant deficit, and what we’re finding is that even on quite mild days with not too much wind, the fires are running quite quickly through the grass and into the forest.”

Mr Rankin said the biggest concerns on the perimeter were mainly down the eastern side and in the south-eastern corner.

“We’ve also been concentrating fairly strongly on the south-western corner, north of Willung, where we had some activity two days ago,” he said.

“All the northern perimeter around the Rosedale-Longford Rd is relatively well contained – we’ll continue to work on that but we’re quite confident.”

Mr Rankin said crews would continue to monitor peat areas that have been identified within the perimeter of the fire, particularly in the south-eastern region.

“There are some patches of peat that are on fire,” he said.

“The community would have been hearing about the peat we had last season over in the west of the state – this is very different to that.

“It doesn’t put off anywhere near as much toxicity in the smoke.

“We’re managing through the EPA to monitor the smoke levels, and the toxicity has been so low that their equipment struggles to read any harmful products in the smoke.

Speaking on ABC Radio Monday morning, Incident Controller Andy Gillham said the ability to water bomb the fire at night, filling from nearby dams – a first for Australia – had proven invaluable in controlling the fire.

He said about 85 per cent of the Holey Plains State Park had been affected by the fire to varying degrees.