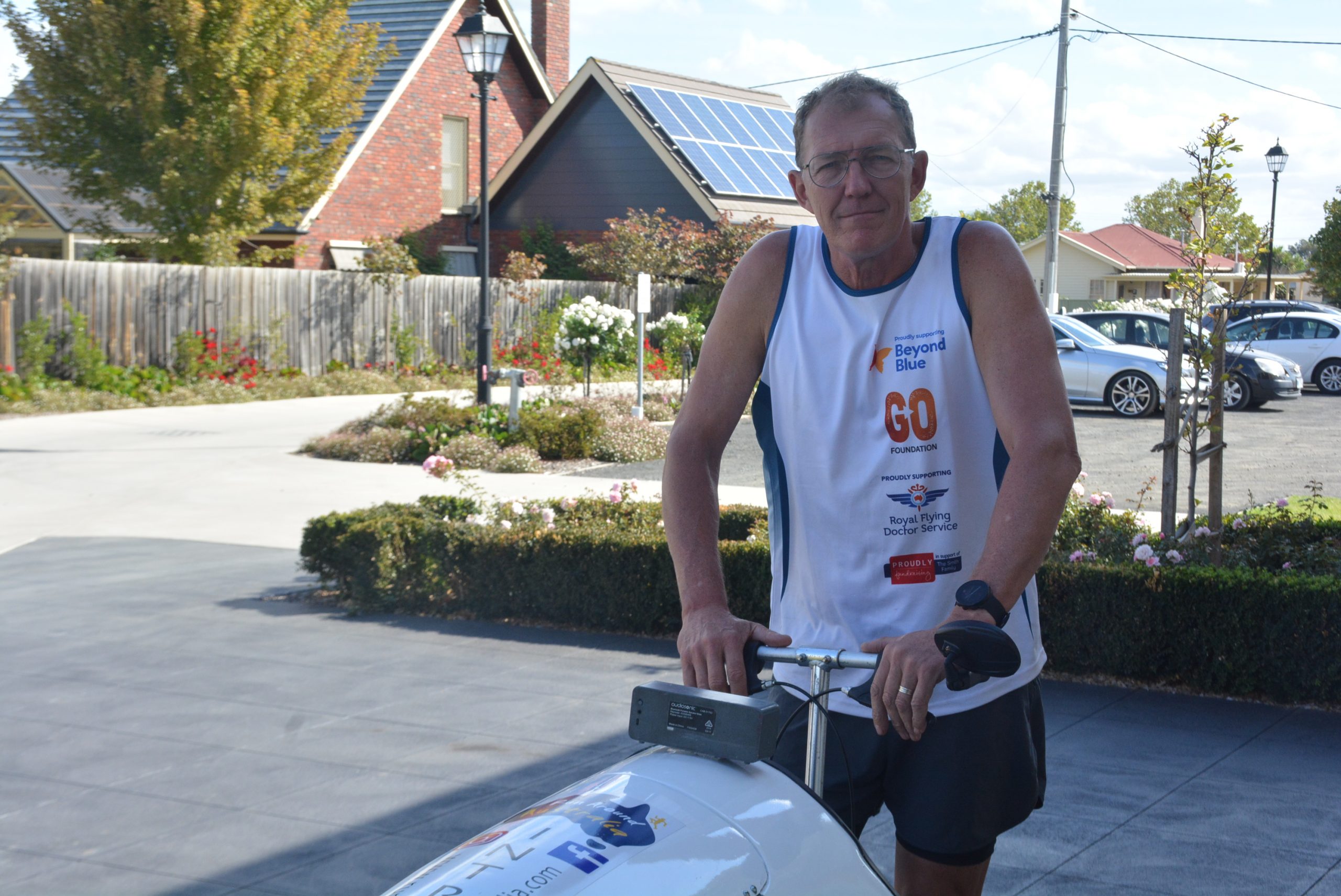 ANYONE struggling to find motivation to get up for a morning run may find some inspiration from Melbourne man Andre Jones, who stopped in Sale on Thursday during the early stages of his gruelling run around Australia.

Having left Melbourne on March 10, Andre will complete the equivalent of 37,835 laps of the MCG, running about 50 kilometres per day, and staying in 219 towns on his year long 15,134 kilometre journey.

And he will do it all by himself, pushing a 100 kilogram buggy filled with water, food and equipment for the entire duration.

“My wife is a speaker for BeyondBlue and my daughter is an ambassador,” he said.

“The Smith Family helped out my mother when we were younger, my wife is a fanatical Swans supporter and the GoFoundation is run by Adam Goodes and Michael O’Loughlin which educates indigenous youth, and I’m running for the Royal Flying Doctors simply because if anything happens to me I want them to know where I am,” Andre said.

“I am hoping to raise $60,000, which is about one dollar per kilometre for the four charities.”

Having never run competitively, Andre completed a run from Melbourne to Darwin in 2017, which he described as a “warm up” and said he set his sights on bigger things upon reaching the Northern Territory.

“I was influenced by Tony Rafferty when I was very young and I read about him running across Australia and so many things happened [over the years], it went to the back of my head,” he said.

“By the time I reached 55 my wife said ‘if you want to do it, commit yourself to it’, so I ran to Darwin, and thought if I could do that I could set myself on something bigger.”

On the road for about nine hours a day, Andre mostly runs alongside the shoulder of highways, in the opposite direction to traffic, at a slow, loping, Cliff Young-like pace, allowing him to keep general soreness or potential injuries to a minimum.

“I know I have to be on the road the next day and the next week, so I take it easy.

“My sole criteria is to get to accommodation at the end of each day.”

Andre said the motivation to keep going was made easier by the fact that he felt “a sense of achievement” following each day, and that each day he ran raised more money for the charities.

“If I was doing it for myself I probably would have given up after the first week,” he said.

“You feel lousy at the end of the day.

“You have a rest, and the next morning you say ‘yeah I feel okay, I’ll do it again’, and it’s that stupid mind game.”

Andrew will need to combat a variety of obstacles on his trip, including changing elements, stray wildlife and repairs to his buggy as he attempts to become the first person to finish a completely solo run around Australia.

Those interested in donating can do so at www.runaroundaustralia.com.