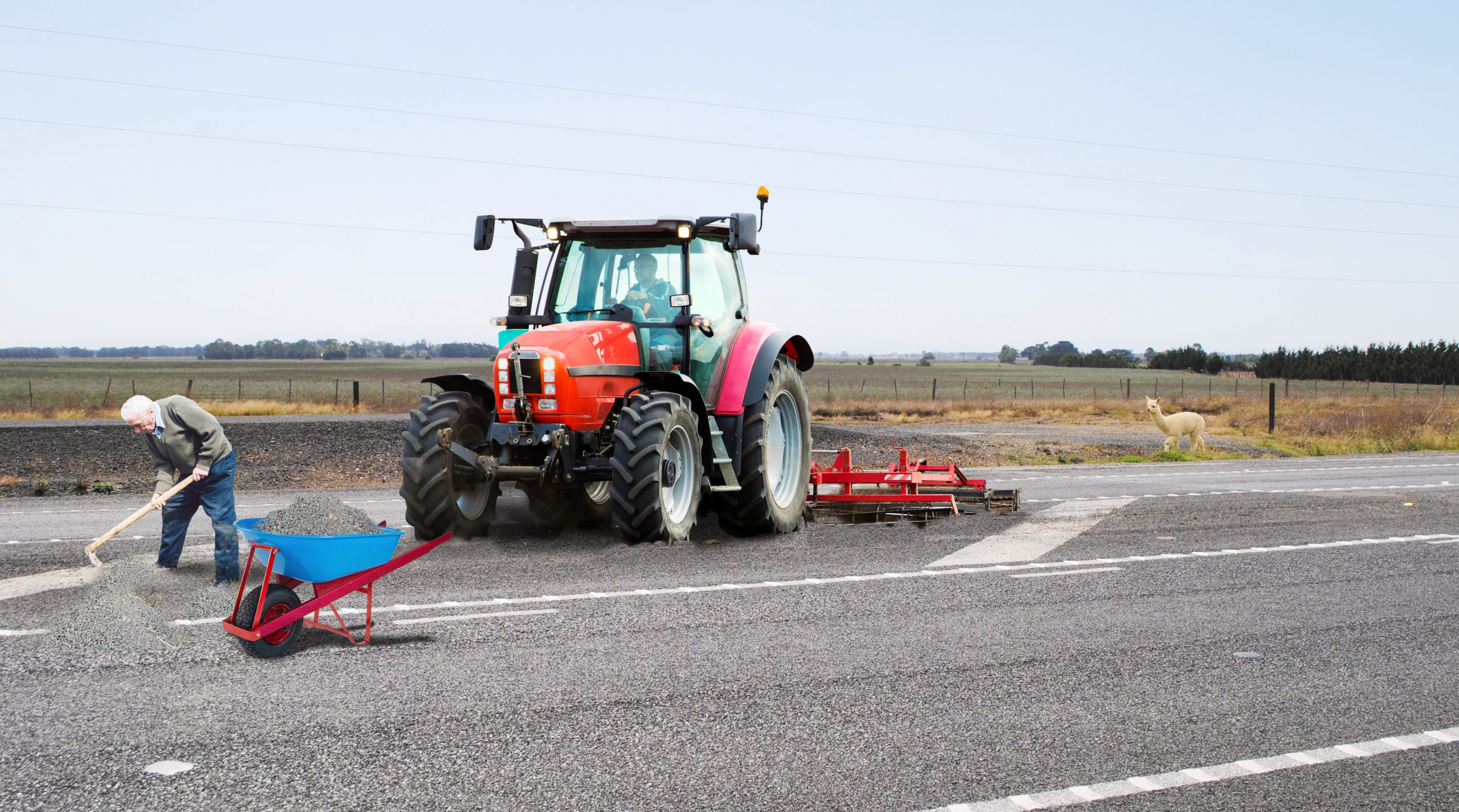 A GROUP of proactive local farmers have taken matters into their own hands, banding together to complete an unfinished section of highway duplication in Kilmany – one of two stretches of uncompleted highway between Sale and Traralgon.

Fed up with waiting for the state government to pledge its $33 million share of the $165 million needed to complete the final two stages, the militant farmers are expected to descend upon the 3.4 kilometre unfinished stretch of road later today, April 1.

According to reported sightings, a convoy of tractors, utilities, four-wheelers, slashers, harvesters, heavy machinery and at least one alpaca was moving in a southerly direction on the Maffra-Rosedale Rd near Tinamba today.

Wielding high-tech items like shovels, picks, post-hole diggers, ploughs and pitchforks, the makeshift road crew is ready to get to work, and have been blaring Highway to Hell by ACDC and Road to Nowhere by Talking Heads in anticipation from their vehicles.

The sophisticated operation is understood to be the brainchild of Fulham’s Hayrick Crop, who specialises in grain production and has previously won awards for being out standing in his field.

Chatting with Behind the Times‘ reporter Justine Kidding from the seat of a Husqvarna ride-on, Mr Crop said he was sick of waiting, and thought “it was about time someone just bloody rolled up their sleeves and did something”.

“Welcome to Wellington Shire, home of the great Princes Track,” he said.

“We’ve got beer exploding in the back of trucks because of the potholes, which is a tragedy in itself, and you’re downright tempting fate if you try and put your kelpy in the tray.

“Some of the boys down at Casino Farms told us they’re packing lettuce leaves separately for transport, but it’s arriving at the other end as a five-lettuce mix.

“My wife and I were talking about how unbelievably, ridiculously laughable this whole debacle has become, and Lucerne just turned to me and said, ‘someone just needs to take the bull by the horns,’… that’s what gave me the idea,” he said.

“We got chatting to my cousin, Bill Dozer over in Heyfield, who reckoned he could do some of the construction, and this bloke I met at the Newry pub, Dwight Spark, reckons he can tackle the lighting, and it’s just snowballed from there.”

“We’re sick of just sitting on the fence, it’s made us all really wired and tensile – highly strung even,” she said.

“We could have just picketed, but thought we’d just break down the barriers instead and raise the stakes.

“Now, the finish line is in sight.”

Dairy farmer Beau Vine, of Maffra, said he joined the cause after a milk truck turned his cream into butter.

“I know it looks more like a photo shoot for a John Deere catalogue out here, but we’re fair dinkum – we’ve herd it all really, and we’re just sick of the udder nonsense.

“We shouldn’t be teated like this, it’s just bull, we’re the laughing stock of the state.

“We’ve been stuck waiting until the cows come home – they came home, and we still don’t have a bloody road.

“We’ve got no beef with the construction workers, it’s just time someone got the job done.”

Mr Vine added as the farmers were putting in the hard yards, they thought they’d put in a few special touches.

Rough sketches on a loose bit of hay wrap indicated a road shoulder at least 10 metres wide to allow for cattle droving, and line marking dribbling out the back of an old leaky Murray Grey tanker.

“We’re not having any bloody barriers on these sections either, mainly because we can’t actually fit the ag machines on the road to put them there,” Mr Vine said.

As for the new train crossing?

“We’ll cross that bridge when we get to it,” Mr Vine confirmed.

The group of farmers hope this is enough to bring the Premier east of Traralgon, or at least alert him to east Gippsland’s existence.

Gippsland MKR Darren Chestnut again pointed out the problem with the current road to nowhere was all the state government’s fault – not his – reissuing five media releases which said the same thing in several different ways.

However State Roads Mimicker Jaala Pullover said Mr Chestnut was just bitumening, and Premier Daniel Andrawls would announce when the road to nowhere would become the road to somewhere in good time, or even bad time, if Mr Chestnut continued to bitumen.

Sources say Mr Andrawls has put the pile of highway money in his safe just for the moment, hoping holding back will have a negative effect for the Coalition in the impending federal electrocution.

Kilmany Chamber of Commerce Enterprise Chief Business Lady Deanne Take da Pearce said she was just sick of all the bitumening on both sides, and was happy at least something was being done.

“These farmers are my heroes – it takes a lot of hide to do what they’re doing,” she said.

“We’re trying to establish new industries like hemp in the area – how do we get that through this joint if we’re being constantly disrupted?”

While the general consensus in the region is overwhelming relief something is FINALLY happening, not all of Wellington Shire’s residents are happy with recent developments.

Mona Wyner, the self-appointed leader of Stop the Duplication group, said she wanted to preserve the stretch, pointing out in the time it’s taken for the road to be done (a decade, to date), the 3.4 kilometres had been given a heritage overlay.

“This road holds so much historic significance for the region – who could forget the political football match between Chestnut and Pullover that was physically played on this stretch of road?

“Every traffic cone, every confusing road sign, every pothole is precious.

“STD just wants it stopped, history should be preserved.”

VicRoads representative Dusty Rhodes did answer a call from the Behind the Times, but made some gravelly noises with his voice before rapidly retreating footsteps could be heard in the background.

In case you didn’t notice, this story was published on April Fool’s Day.