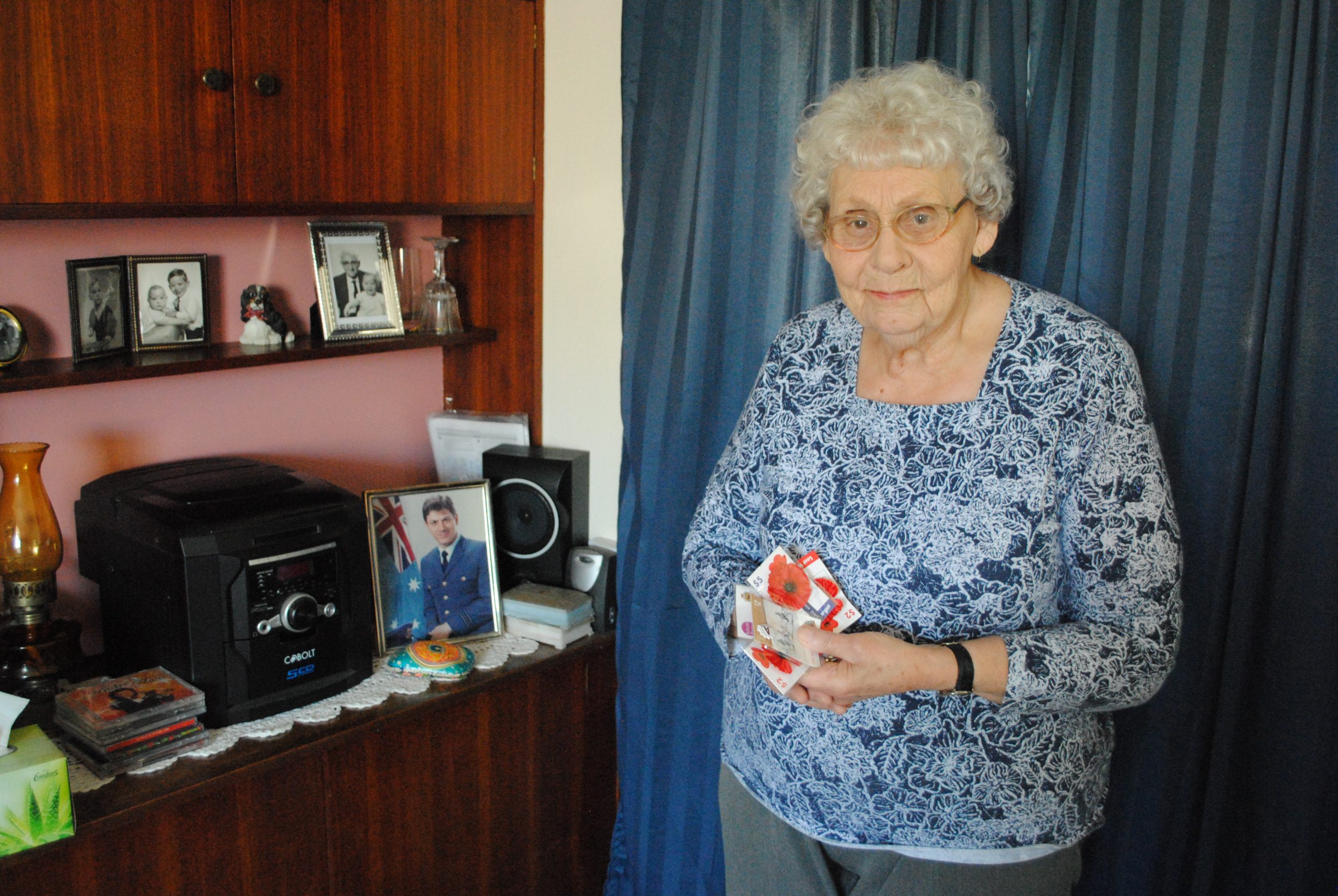 AS Anzac Day approaches, Sale resident Brenda Mills-Hayden has again been busy selling poppies and badges, maintaining a strong legacy of military service and remembrance in her family.

This year will mark 30 years since the sprightly 88-year-old first began selling poppies in Australia, and Ms Mills-Hayden trusts the public will continue to support and recognise the significance of the occasion.

“It’s a ‘thank you’ to all the people who have lost their lives or being injured for life because of the war,” Ms Mills-Hayden said.

“I’ve always felt that the least one could do is buy a poppy or sell a poppy – even if you haven’t got much money, you can still do that.”

Not even a cyst, which developed in her leg and left her unable to walk last April, has stopped Ms Mills-Hayden from selling poppies.

“I was determined I was going to do, it so I went and sold them in a wheelchair last year,” she said.

Born in England, Ms Mills-Hayden began organising poppies in 1968, distributing them to various shops and schools around the Norfolk County, before coming to Australia in 1989.

“We came to Sale because my eldest son was in the Air Force and had been stationed there, and he eventually emigrated with his wife and children,” she said.

“I’ve had two sons that went through the Royal Air Force in England.”

Military service has a long history in Ms Mills-Hayden’s family tree, with her father serving in World War 1 as part of the Royal Flying Corps, and her uncle one of more than 2000 people that went down with HMS Royal Oak when it was bombed by a German submarine in 1939.

With seven children, 24 grandchildren and 24 great grandchildren, Ms Mills-Hayden has vivid memories of World War 2 in London, where she stared her fate in the face.

“I was in the bomb shelters,” she said.

“We went to bed in the shelters, we went to school in the shelters and during the blitz a 500 pound bomb came over, hit the windowsills, went under the shelter where we were and didn’t go off, otherwise I wouldn’t be here.

“We were very lucky – the Lord looked after us that day – we were out of the house for three weeks while they dismantled the bomb and took it away.”

Ms Mills-Hayden trusted the Anzac legacy would continue to be respected, with this time of year especially close to her heart.

“This is very important. My youngest daughter was born the day before Remembrance Day so I called her Rosemary for Remembrance,” she said.

“You’ve got to think it’s not so much those who have died,” she said.

“It’s the people who are left who are injured.

“Perhaps families who can’t work, and it [the money raised from poppies] goes to the veterans in order to help people, and that’s what’s so important – to look after the ones that are left.”

Ms Mills-Hayden is selling poppies in Gippsland Centre Sale in the lead up to this Anzac Day.