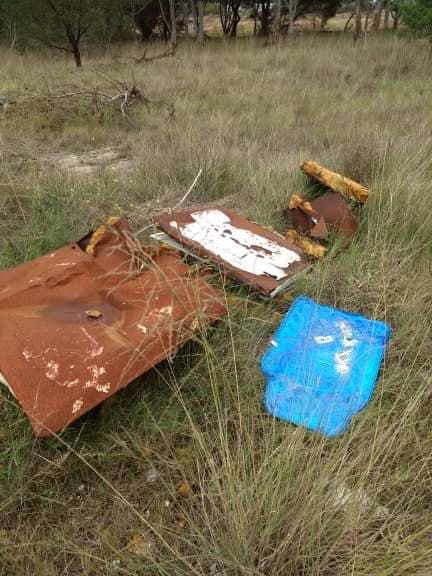 GIPPSLAND’S beautiful and iconic natural environment is being trashed by people who continue to use the area as a rubbish dump.

Local resident Toni Lynch sent these photos of Weirs Crossing into the Gippsland Times to highlight the appalling littering in her local area. The photos show a complete disregard for littering laws or for the health of the natural environment.

Weirs Crossing is a beautiful section of the Avon River surrounded by market gardens and green pastures, and is sometimes used by picnickers or swimmers.

But being in a fairly isolated spot, it and other areas around the shire’s regional towns are increasingly becoming covered in an unsightly array of paper, plastic and household rubbish.

Rubbish dumping is a constant source of discontent for Gippsland Times readers, with pictures of dumped litter regularly sent to the editorial desk. Recently the Environment Protection Authority advised Gippslanders to report litterers, where possible.

The authority has a litter reporting program which allows Victorians to report littering, including throwing rubbish from vehicles.

Wellington Shire Council is also trying to educate residents and visitors about the financial and environmental cost of littering.

Built and natural environment general manager Chris Hastie said the dumping of rubbish in public spaces was a serious issue, which ultimately cost ratepayers to clean up.

“Council has so far this financial year spent around $23,000 cleaning up rubbish dumped in public spaces, which is a marked increase on last year,” he said.

“The message is simple – your rubbish, your responsibility.

“If you dump it illegally, it becomes a community responsibility and costs us all.”

He said litter negatively affected the amenity of the environment, and that residents were “the EPA ‘s eyes and ears”.

“If you see littering, report it,” he added. EPA litter infringement penalties range from $322 for a small piece of rubbish or unlit cigarette, up to $645 for a lit cigarette.

Last financial year, EPA handed out more than $5 million in penalties to more than 11,000 Victorians for discarding litter, mostly cigarette butts, from their vehicles.

Protecting the environment from litter costs tens of millions of dollars to clean up every year, with the responsibility for enforcement of the litter provisions of the Environment Protection Act shared between a range of agencies, including local government, EPA and Victoria Police.

Victoria is becoming one of the worst states for littering, according to an audit by Keep Australia Beautiful anti-litter movement.

An audit by the group, which was founded in Victoria in 1969, found that in 2017-2018, littering increased in Victoria and Western Australia, but reduced in other states.