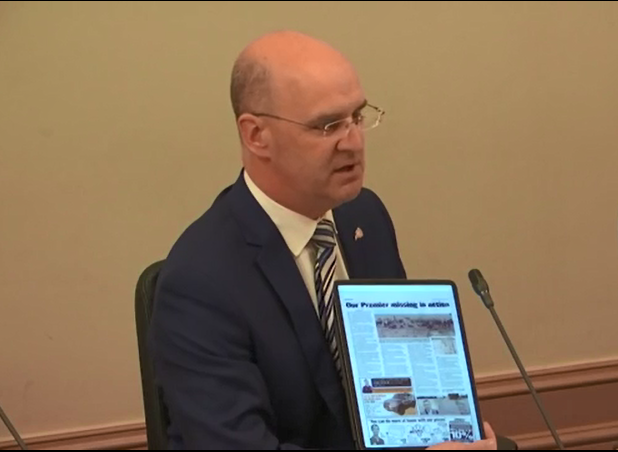 During the first hearing for State Parliament’s Public Accounts and Estimates Committee, Mr O’Brien asked the premier to visit and bring an announcement for municipal rate relief.

“I’ve been extremely disappointed, as have many of my constituents, that the premier has failed to visit our region where some districts are into their third year of critically low rainfall,” Mr O’Brien said.

“The Premier has been to the Latrobe Valley five times since the state government declared drought in Wellington and East Gippsland Shires, and yet has not once made it past Traralgon.

“In the hearings I tried to be non-partisan and simply highlight to the premier that the problem is real and farmers are hurting now, and he should visit.

“I also cited an article in Friday’s [May 31] Gippsland Times with the headline ‘Our Premier missing in action’ to highlight that it’s not just me as a politician, but our whole community which has noticed the premier’s lack of presence.

“While another politician visiting doesn’t solve the drought problems it would be a signal from the leader of the government in this state that he cares and is concerned about our community.

“Most importantly, the Nationals, the VFF (Victorian Farmers Federation) and most local farmers support municipal rates relief as the most equitable way to support our farmers.

“Daniel Andrews was a minister in the previous Labor government that provided such relief, and there is no reason he couldn’t be doing it for Wellington and east Gippsland farmers now.”

In response, the premier indicated the government was willing to provide more assistance if it was needed, but was non-committal on a visit.

“The last few weeks have delivered some good rainfall, but for many it’s too late to get good pasture growth and even if the rains continue throughout winter, recovery will take a long time,” Mr O’Brien said,

“The government needs to be cognisant of that and provide further support for some time yet.”