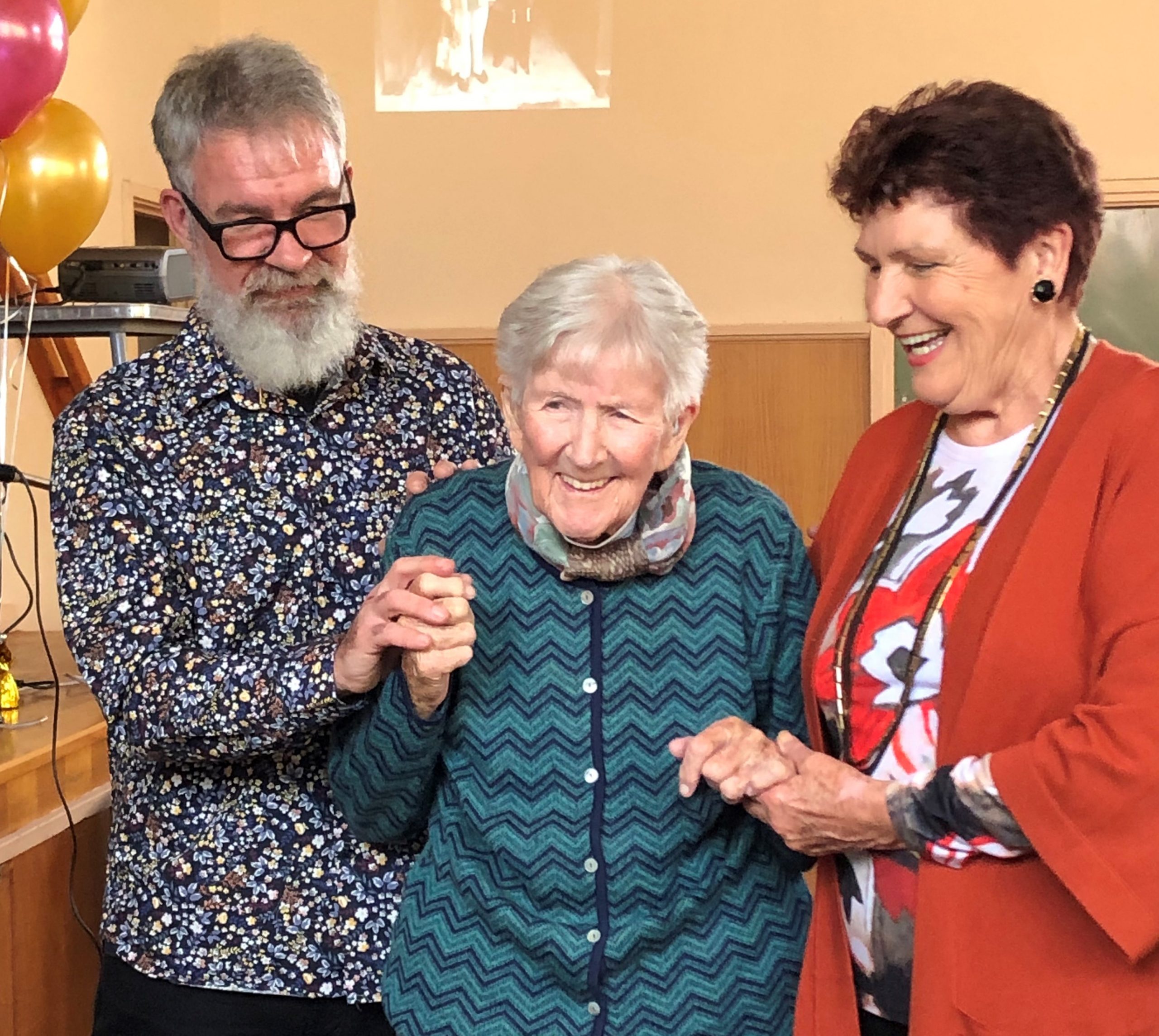 “IF you think something is important you have to have a go, not a bit of good sitting back and moaning.”

Boisdale’s beloved Florence Amey Pearce celebrated a momentous occasion last month, when she, her family and friends came together to commemorate her venture into centenarian life.

Birthday celebrations began two days before, with a morning tea at Stretton Park held by members of the Boisdale-Briagolong Friends of Red Cross, and was followed by an official birthday high tea at the Uniting Church Hall on her actual birthday.

Congratulatory messages were read from Queen Elizabeth, the Governor General, the Prime Minister, Premier, Gippsland MHR Darren Chester and many other dignitaries.

Affectionately known as Flo, the inspiring local identity has dedicated herself to a life of community service.

She has spent 78 years as an active member of the Red Cross, and 65 in Save the Children, of which she was the secretary for 50.

She has a burning passion for local history, spending much of her time collecting and sharing links to the past.

“It’s very interesting, all around you if you open your eyes, and important to learn about and from the past,” she said in her biographic piece, penned by close friend Pauline Brightling from interview transcripts.

The piece recently featured in The Bridge, the community newsletter for Boisdale, Bushy Park and Valencia Creek.

Flo was born to Ernest and Mary Pearce in a little cottage on the Back Boisdale Rd on May 9, 1919, joining siblings Elsie and Wilfred.

Her grandfather had taken up a Closer Settlement block in 1911, and because it was a bigger family, they were allocated two blocks – 80 acres to dairy and to grow the obligatory 20 acres of sugar beet each year.

The house on the property was particularly pleasing for Flo’s grandmother, as the family had previously been living in a tent at Wonthaggi.

Flo moved into the farm, known as Penpol, on Pearce’s Rd, with her parents in 1929, and stayed there for 65 years until 1994, when she moved to the big smoke, Maffra.

She began school at Boisdale State School, before graduating to Maffra for secondary school.

In the depths of the Great Depression in 1933, her school bus was cancelled, forcing the then year 10 student to ride her pony to Maffra and back each day.

Before she could complete her intermediate certificate at school, Flo decided she didn’t want to go to school any more, and “ran away by staying home” to help her family on the farm.

Despite Ernest and Mary’s best efforts, Flo was determined not to return to school, but that didn’t stop her from learning – through books and listening to people “who had interesting and enlightening things to say”.

Flo and her family were regulars at the Methodist Church, attending every Sunday and at Sunday school, where she would later teach.

She was inspired by a Sri Lankan Seventh Day Adventist, who spoke at a service about life as ‘saved for service’.

Flo credits the man with setting the direction of her life.

“I didn’t have any desire to go away in a missionary capacity, but this inspired me to do things of service in my own community,” she said.

During World War 2, Maffra Hospital was established, but was without a cook.

Mary, keen to help, volunteered Flo’s services, and despite her distinct lack of experience in the kitchen, Flo soon cooked all the hospital’s meals.

During her time in the kitchen, she was often on the phone to her mother, asking what to do next.

“I never enjoyed cooking much, but over the years I did have a couple of specialties – brown apple cake and ginger fluff were both very good contributions for stalls,” she wrote.

In 1973, after the Maffra Shire put a call out for a focus on history for its centenary, Flo became the president of the local historical society.

“That was a tough job to say the least, because I didn’t know much about it to begin with,” she wrote.

The group set about putting pictorial records together and established a museum, moving the weighbridge from the Maffra Sugar Beet Factory to its present site, and organising an art competition to raise money.

Flo has published many books and booklets over the years, her first focusing on herd improvement – her family had been heavily involved in herd testing from when it all first began in 1926, and her father and brother had been a part of the push for artificial breeding in the 1950s.

Her books included Bald Hills to Bundalaguah, Boisdale, Newry Presbyterian Church 1985, The Street Where You Live, Beauty Spots of Maffra, and Alan McLean: I remember.

“It was a great enjoyment to get those stories together and set them down for everyone to know more about our histories,” she wrote.

Another passion of Flo’s has been her green thumb, and she and her mother spent hours working on the Penpol garden.

“When I moved to Maffra, I had never ever bought a carrot from a shop … I had to get a garden going there,” she wrote.

“Potatoes from the ground, baked or boiled, with butter, salt and pepper – nothing better!”

In 1953, Bill was able to convince his stubborn sister to take a trip with him, Betty Amey and Pearl Treasure, through central Australia to Darwin, staying in a caravan.

“Bill was sick and I had to drive the dirt roads from station to station while he lay in the back,” Flo remembered.

“The Redex motor rally had just gone through (the opposite direction) so we were following their dust trail.

“This was really different country to me, but then at one station they had the radio playing the ABC news, just exactly the same as we listened to at home, which was great to hear.

“So Bill took me out of my known territory, and I was pleased to see those parts of Australia, but I was always very happy to get home.

“Reading and listening to the radio has also taken me to many other places I have loved to visit, on the pages or over the air.”

While Flo now lives in Stretton Park, Maffra, she remains interested in local and world affairs and is still as sharp as a tack.

Information sourced from a biographical piece written by Pauline Brightling in The Bridge, the community newsletter for Boisdale, Bushy Park and Valencia Creek, June 19.