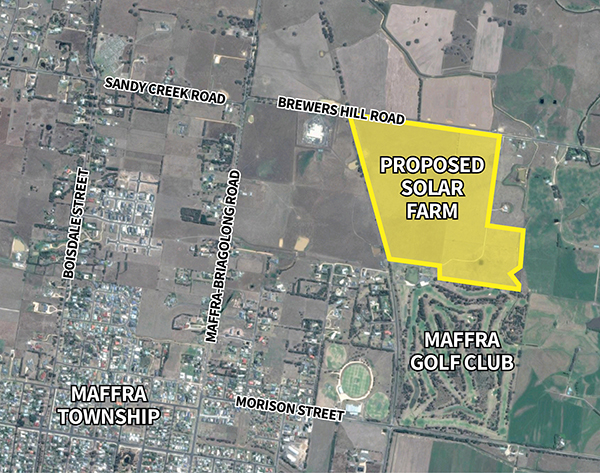 CONSTRUCTION of a $50 million solar farm near Maffra could begin within months.

The renewable energy developers behind the proposed solar farm on 60.7 hectares (150 acres) say the project will provide a much-needed boost to the local economy and supplement the state’s dwindling energy supply.

ARP Australian Solar director George Hughes told the Gippsland Times on Monday that despite some “minor delays” caused by new legislation, development could begin within months.

“These new requirements have delayed our project slightly, however we are certainly making positive progress on this and are getting towards the end of this stage and approval,” he said.

Once finished, the solar farm is expected to provide 30 megawatts of power, which will be sold to energy companies and go back into the grid.

ARP Australian Solar received local council approval last June for the development on Brewers Hill Rd, however it is still unclear if all state government approvals have been given.

Mr Hughes said the Maffra site was chosen because of its proximity to a sub-station, and because of the need for jobs and energy in the Gippsland region.

He said key objectives of the development proposal were to contribute to a “sustainable” future for the energy sector, retain agricultural land by facilitating grazing on site, and bring energy and employment to local communities.

Development could create more than 100 local jobs, as well as some ongoing employment.

The solar farm will generate enough energy to power 7200 households, using an average of 4266 kilowatt hours per year.

“With the recent closure of Hazelwood, we think this would help secure the state’s energy future and investment in the local economy,” Mr Hughes said.

The proposal is for about 100,000 1.6 metre square, solar photovoltaic panels which will be fixed onto aluminium supports in the ground.

The panels will stand high enough off the ground to allow for livestock to graze.

Mr Hughes said the company’s aim was to reduce the environmental impact of the development, and only small amounts of concrete would be used, which could be removed at the end of the farm’s 30-year life span.

The number of solar farms in Australia has blown out in recent years, with the high return developments attracting significant local and overseas investment.

Several large-scale solar farms currently in development or recently completed are set to contribute significantly to the country’s power supplies.

A solar and energy storage project near Kerang in western Victoria that opened this month is the largest pairing of a solar farm and a grid-scale battery system in Australia. It has combined 60MW of PV panels and a 25MW/50MWh battery system, and is Tesla’s second-biggest battery in the country so far.

Despite the boom, there is concern that new state targets could also cause delays and barriers, as well as lift the cost of development.

The state government changes to the planning rules for large-scale solar and wind energy development, which do not affect the Maffra proposal, mean planning permits will now be required to build power lines to connect new large-scale electricity generators to the grid.

Until now, developers in Victoria could build new power lines without permits if they operated at less than 220,000 volts.

The new rules will only apply to new planning permit applications for electricity generators, and will not be applied retrospectively.